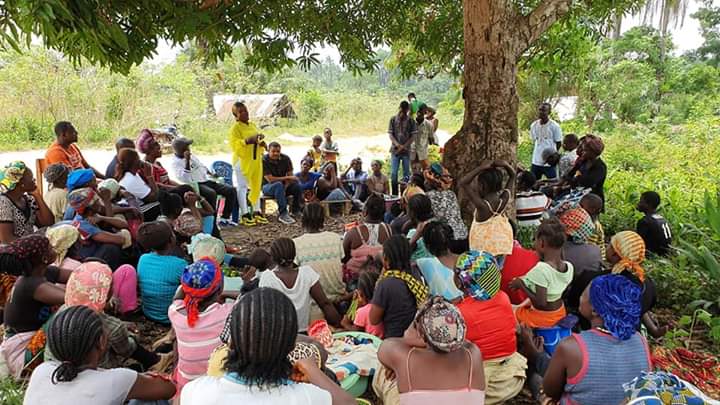 Gbarnga, Bong County – Several people in Bong County have observed that the lack of robust awareness about human trafficking, which is also known as trafficking in persons (TIPs), is leaving many perpetrators of the crime unidentified while their victims endure the raft.

These residents have also expressed their commitment to help increase public awareness about the danger of TIPs in their respective communities.

Kollie Davis, a resident of Gbakona community alleged that there are possible child and sex trafficking taking place in mining communities across the county, but he added that residents are unaware of its impact on the society.

He added that some poor families “even encourage their daughters to be exploited in prostitution to supplement family income”.

“They take these children or women to urban areas or mining areas and exploit them into street vending, domesticated servitude, or sex trafficking in the name of helping them.”

Added George Washington, a resident of David Dean town – a popular mining community in the county: “It’s not a secret that in Dean town, where mining activities are taking place, young girls are being used as sex machines – girls between the ages 12-17.”

“Sometimes these gold miners bring girls here with the expectation of offering them jobs but that can be on the contrary so they end up venturing into sex for money in order to survive.”

Lawrence Tokpah of the Gbarnga disabled community said that women and children of mining communities are most vulnerable to TIPs, adding that traffickers are most often “extended family members or trusted persons” of the community.

Jungle James Camp in Fuamah District, Gbakona in Zota District, Gbarmue in Jorquelleh District #3, Degei in Sanoyea District and David Dean town are some of the areas where illicit mining is heavily concentrated in the central Liberian county.

Some of the children working in the mining communities have told LocalVoicesLiberiathat they want to move away from life in the mines. Some claimed they have been denied education by their parents or guardians.

Darlington Kerkulah, 12, is one of many minors working in the Degei town mines.

“I am tired suffering here and I want to go back to my mother in Kpateyamah to go to school,” the 12-year-old said.

“This work is making me sick; everyday I’m getting Malaria, cough and cold”.

Also, Patience Browne, 15, said since she moved with her aunt in the mining community when she was 9-year-old, she has not been sent to school. All she does is home chores for her aunt, who is said to be a local broker.

Aaron Juakollie, the Executive Director of the Foundation for International Dignity (FIND) – a human rights advocacy NGO, during a recent awareness campaign against TIPs in  the county called on locals to form “collective effort against human trafficking”.

He assured that his organization will continue to sensitize the public about the dangers of TIPs with the hope that communities can take action against the crime by reporting to the authorities.

Liberia risks losing millions of dollars in non-humanitarian aid from the United States if the country doesn’t improve on the next State Department’s human trafficking report.

The last report showed that Liberia is on the tier-three watch list – a position that means the country has not been doing enough to stop TIPs.

And Martha Cammue, who heads a local CSO in Bong County, is worried that it will be troubling for the country “if more meaningful and effective mechanisms are not instituted to combat human trafficking and protect survivors in the country”.

“I believe that the fight against human trafficking cannot be left with government alone. Some of us are aware of the dangers of trafficking. When a boy or girl is trafficked…, some of them even died in the process,” Cammue added.

For her part, Hawa Kromah, Coordinator of the Women and Children Protection Section of the Liberia National Police in Bong County, said that there’s an influx of children hawking across Gbarnga city.

But she said it would be difficult for law enforcement officers to make a determination without the support of the community, adding that most people do not understand the basic facts and information about human trafficking.

Bong County Labor Commissioner Sayblee Weyea, who heads the human trafficking task force in the county, said that the government is working with various civil society organizations to increase awareness.

The Labor Ministry in December last year disclosed that the government had made an allotment of US$50,000 in the 2019/2020 fiscal budget to help curb human trafficking.

And Mr. Weyea is optimistic that the funding will significantly help to increase sensitization about TIPs across the country.