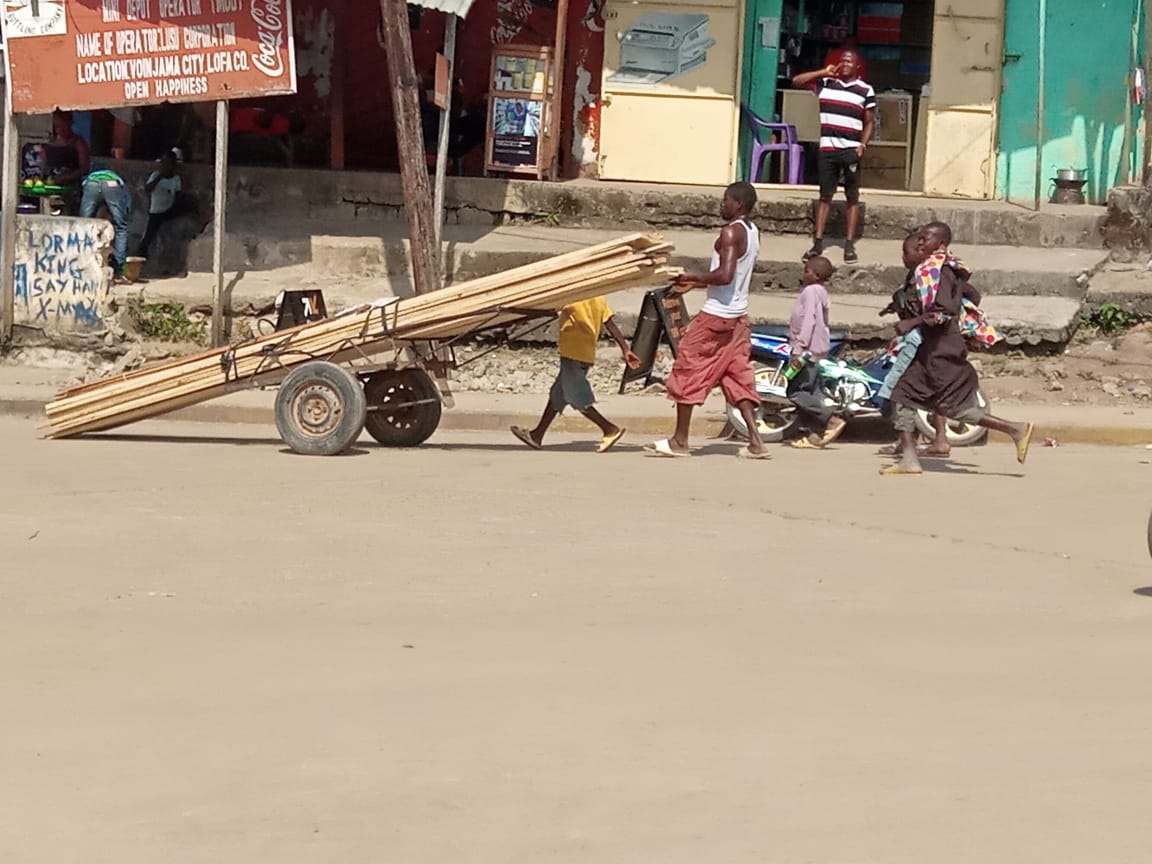 Voinjama, Lofa County – Moussa, 8, Lagji, 12, and Kamara, 15, (not their real names) have just spent their first year in Voinjama where they were sent by their parents to learn Arabic.

Moussa was brought to the county from Sierra Leone while Ladji and Kamara were brought from Monrovia. The three are not attending any formal school, unlike the Arabic teachings.

Moussa and his friends are often seen in the streets of Voinjama reaching out to businesses and individuals to collect their garbage. In return, they get some money.

They tell LocalVoicesLiberia that each of them is tasked by their teacher to contribute every day for food.

“We are more than 30 students at where I am and every day our teacher demands that each of us brings L$ 50,” said the eight-year-old. “He doesn’t accept any excuse if you don’t bring that money”.

Ladji, the eldest of the three, added: “We do this because this is how we can eat… sometimes we can even go and work on people’s farms so that they can give the money to our teacher for him for this”.

A neighbor, who has observed the boys’ situation over the past several months, described it as appalling.

“I don’t understand why people will have their children to go through such conditions,” said a man, only identified as Mawolo.

“I can’t understand this, even with this COVID-19 problem I still see these children around the streets collecting dirt for people.”

“One time I was riding going to Kolahun I saw three children walking on the highway alone. When I asked them they said they were tired of the Arabic school their parents sent them to, and they were going back home,” said Yollen Borbor, resident of Foya who called in on a live radio program.

It is unclear whether the three boys were traffcked to the county but residents said the government must investigate and prosecute people who are doing “bad things” to children.

Authorities in Lofa County have been struggling to deal with human trafficking in the past years, with the county attorney Cllr. J. Luther Sumo stressing that the situation of TIP is a “serious concern” in the county.

He said law enforcement officers have investigated many incidents of human trafficking in the county but they have been unable to go ahead with prosecution due to interference from tribal and religious leaders.

“On many occasions we have arrested whole trucks of children being taken from other places and brought to Lofa; Just few years ago, we arrested a whole truck in Zorzor that was bringing children from Cape Mount, Bomi and Monrovia,” he explained.

“The children were all around the streets in Zorzor and that’s how people were concerned and contacted the police. One of those children even died later from snake bite.”

Citing another incident, Cllr. Sumo said a Guinean was trafficked to Liberia and was held as a palm harvester for years until he was charged for rape.

“They brought in this guy to harvest palm under the false impression that he would be paid. Later, he went and raped his very landlord’s wife and that’s how the case was brought to us,” said Cllr. Sumo.

Most suspected cases of TIPs are internal and on many occasions would involve children, the county attorney said.

“I think you guys already heard about the other case where a Guinean woman brought a child here to sell. And because the matter was already at the notice of the Guinean government, we arrested her and turned her over for prosecution,” said Cllr. Sumo.

In 2005, Liberia’s legislature passed a law that made human trafficking a criminal offense. The law defines human trafficking as “the recruitment, transportation, transfer, harboring or receipt of a person by means of the threat of use of force or other means of coercion, adoption, fraud, deception, abuse of power or of a position of vulnerability, or by giving or receiving of payments or benefits to achieve the consent of a person having control over another person, for the purpose of exploitation”.

Meanwhile, Cllr. Sumo has frowned on tribal and religious leaders’ interference into matters of trafficking in persons.

“You know what it means for group of people including imams and elders coming to you? Anytime people attached religion or tradition to legal matter, it creates hard feeling in the public and sometimes we legal people have to be careful…. we don’t want Voinjama to go amok,” he said.

He said when a human trafficking issue arises at the level of the Liberia Immigration Service in the county his office is often not informed. He complained that the LIS has “not been furnishing us” with information constraining his office to rely upon details “from the grapevine and we try to ask them if this is true”.

However, Cllr. Sumo is hopeful of a better coordination based on a strict warning from the Minister of Labor, who called on members of the task force to work with the county attorney’s office.

Meanwhile a staff of National Secretariat of the anti-human trafficking taskforce at the Ministry of Labor has called on people of the county to take advantage of the hotline by reporting incidents of TIPs in the county.

Nuwo Kenneh, speaking on a phone-in talkshow on the Voice of Lofa radio, said the taskforce current partnership with media organizations and local authorities is yielding some results.

“I want to call on the listening public out there to make use of the 2881 hotline to report issues of TIP out there. To make the work easy, you who are the whistleblower, we have to protect you,” he said.  “You can help save somebody’s child out there”, he added.

Several listeners who phoned-in during the show hailed the availability of the hotline.

Bendu Tulay, a resident of Voinjama, promised to take advantage of the hotline, adding that she has seen “many TIP cases in her community”.

“I’ve been following the entire conversation and it makes some of us very happy that I have gotten this number tonight, this thing made two of my neighbors can’t even speak to me because I reported their maltreatment and abuse of other people’s children to their biological parents”, she said.

If  Liberia slips down to Tier-III in the next State Department’s report, this would cause the U.S. government to withhold none-humanitarian supports to the country.