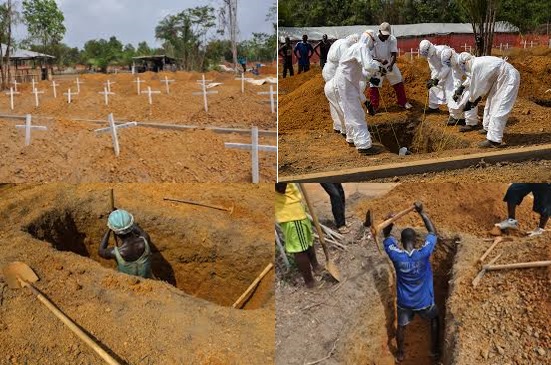 Monrovia – The mortal remains of people dying from the novel Coronavirus pandemic are safe for burial at the government’s burial site in Disco Hill in Margibi County and elsewhere, a spokesperson for the government’s Incident Management Team on burial has disclosed.

The Spokesperson of the COVID-19 Incidence Management Team of the government on bodies also disclosed that family members could also take delivery of their bodies of their deceased relatives who may die from the deadly Coronavirus pandemic.

Liberia and neighboring West African countries were attacked by the Ebola Virus Disease (EVD) in 2014 claiming more than 250,000 lives. People who died from the EVD were cremated instead of burial because health sources said the virus becomes very active after the person dies.

However, health experts have said the Coronavirus becomes inactive when the infected person dies, which allows family members the opportunity to take delivery of their bodies if they wish to do, according to the team.

When contacted whether it was safe to bury people dying from the virus taking into consideration the environment, the Environmental Protection Agency (EPA) confirms it was safe to do so. The agency’s Acting Communication and Media Specialist, Mr. Alloycious David, said the EPA is a member of the Dead body Management Pillar.

According to Mr. David, the EPA was the lead Government of Liberia’s entity that prepared the integrated Standard Operating Procedures (SOP) for dead body management and burial protocols. “The EPA is also involved in monitoring burial sites, soil testing and water quality analysis within those premises,” David said.

The EPA spokesman who spoke for the COVID-19 Body Management team indicated that the EPA started long before COVID-19 outbreak. The agency’s Acting Communications and Media Specialist said the Agency had earlier developed a burial protocol and other guidelines to fumigate cemetery sites.

However, he advised that burial must be done properly following all the SOPs for burial to avoid people being infested.

At the same time, a member of an international non-governmental organization working along with the DBM team on COVID-19 who begged for anonymity said “Disco Hill is safe, fenced, and met the approval of community people

The source also hinted that Disco Hill contains, grave site for children, storeroom and noted that burials are done properly.” He also said there are two chapels at the grave site for Christians and Muslims to pay respect to their families who are taken for burial.

Speaking to this paper recently at the Ministry of Internal Affairs, the Supervisor of Environmental Health and Dead Body Management Team said unlike Ebola, COVID-19 is respiratory tract infection and as such, it’s not active after death.

Henry Bundor said following death of a person, the health officers do their specimen and do their own investigation before burial. Mr. Bundor said the DBM looks at high, medium and low risks which can put them in a better position for burial.

According to Bundor, they don’t force families to turnover bodies of COVID-19 victims, but they dialogue with them to establish whether or not, they are interested in burying their deceased relatives at family gravesites or at the government gravesite at the Disco Hill.

However, Bundor disclosed that members of the DBMT will always be present at COVID bodies’ burials to ensure proper burial that are approved by community people; and that such burial cannot be more than 48 hours.

Speaking further, Bundor added that dead bodies of COVID-19 can also be taken to funeral homes, but the Morticians can be properly informed of the disease they died from. This, he said, puts the mortician in a better position to prepare in putting on the right regalia to work.

He said only on two occasions, bodies of COVID-19 were buried outside of the government’s gravesite in Montserrado County. “Dead bodies are not denied family members who own them. There is a proper dialogue,” Bundor said.

He disclosed that it was on one occasion that community members got annoyed after they have gone to bury somebody who died from COVID-19 because they (community members) weren’t earlier informed by family members, although the standoff was later settled.

When contacted, a lady (Annie Paul, not real name) for fear of stigmatization confirmed that her uncle died from the virus, but was buried at their family gravesite (location withheld).

Are Dead Bodies of COVID-19 Infectious?

Up to today’s date, it is not clear whether the virus can still be active in the dead bodies of people dying from the virus. The WHO says in an online explainer on disease control during natural disasters, that “Contrary to common belief, there is no evidence that corpses pose a risk of epidemic disease after a natural disaster, according to an article online in the National Post  of April 15, 2020.

Most agents do not survive long in the human body after death. Human remains only pose a substantial risk to health in a few special cases, such as deaths from cholera or hemorrhagic fevers, the article explains.

However, Summer Johnson McGee, a health expert at the University of New Haven, told BuzzFeed: “Anyone coming into contact with a COVID-19 positive body, alive or dead, should be using personal protective equipment to prevent exposure. Autopsies and subsequent investigations present real risks for coroners to acquire COVID-19.”

The CBC also quotes Jason Kindrachuk, a Microbiologist and Assistant Professor at the University of Manitoba as saying during the first SARS outbreak in 2003, data suggested the virus could remain infectious in bodily fluids such as blood, urine and feces for 72 to 96 hours.