Around The Country: Today’s Update From Six Counties

The relaxing of the curfew from 3 pm to 6 pm by the government has received commendations from many people of Tubmanburg city.

Residents described the move by the President as “good on the part of the government”. They asserted that the relaxation of the regulation is now allowing business people and other traders to serve the public a little more than before.

The Emergency Preparedness and Response Committee has launched a fund raising program aimed at purchasing medical and non-medical materials for both the call and the isolation centers of the county.

Kula Fofana, the committee’s chairperson, and her financial secretary, Milias Z. Sheriff, said a bank account has been set up at the United Bank for Africa (UBA) and that all funds generated will be deposited. This, they say, will ensure accountability and transparency in the fight against the pandemic.

The Association of Grand Gedeans in the Americas has presented US$3,000 worth of donation in cash and medical supplies to Tchine and Cavalla health district as well as the Martha Tubman Memorial Hospital (MTMH) – the main referral health facility in the county.

Presenting the materials and cash on behalf of the group, Mr. Alex Cazar Quiah said it is the citizens’ way of buttressing the efforts of the county health team.

Dr. Augustine Fannieh of MTMH thanked the diaspora Liberians for the donation, promising that cash will be given as stipend to some health workers assigned at major check points and boarders.

Meanwhile, a committee responsible for COVID-19 awareness has ended a four day tour of the Tempo boarder with Ivory Coast in Glio-Tarwbo district.

Randolph Saydee, head of the committee, said the tour was based on constant reports that people are illegally crossing into the county from Ivory Coast.

Mr. Saydee said during the visit locals were asked to serve as “security for themselves and not to allow anyone enter from Ivory Coast”.

Authorities of the Liberian Government Hospital say health workers are “at risk” due to the lack of gloves and other personal protective equipment (PPEs).

Fantuma Jusu, Administrator of the Hospital, said health workers at the facility – most especially those that are posted at the COVID-19 quarantine center – have threatened to stop providing PPEs for themselves.

The county has recorded four cases of COVID-19. 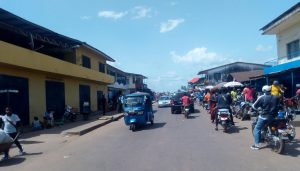 Residents of Gbarnga city have been asked to avoid gathering in crowds. Even though the county has zero case of COVID-19, Dr. Jefferson Sibley, Medical Director of the Phebe Hospital, warns that violation of the social distancing health protocol is risky for the county.

Dr. Sibley’s warning was triggered by several calls from some civil society organizations in the county that people are not avoiding public gathering.

At Phebe Hospital, Dr. Sibley cautioned nurses and doctors to observe all health protocols when catering to patients at all times.

The Asst. Commissioner of Police in the county assured that “his officers will remain in quarantine”. The police officers came in contact with one of the two cases in Foya district – a police aide who later died of COVID-19.

He said although “things are not all well” at the quarantine center, he visited his men on Thursday to encourage them to cooperate with the health measures.