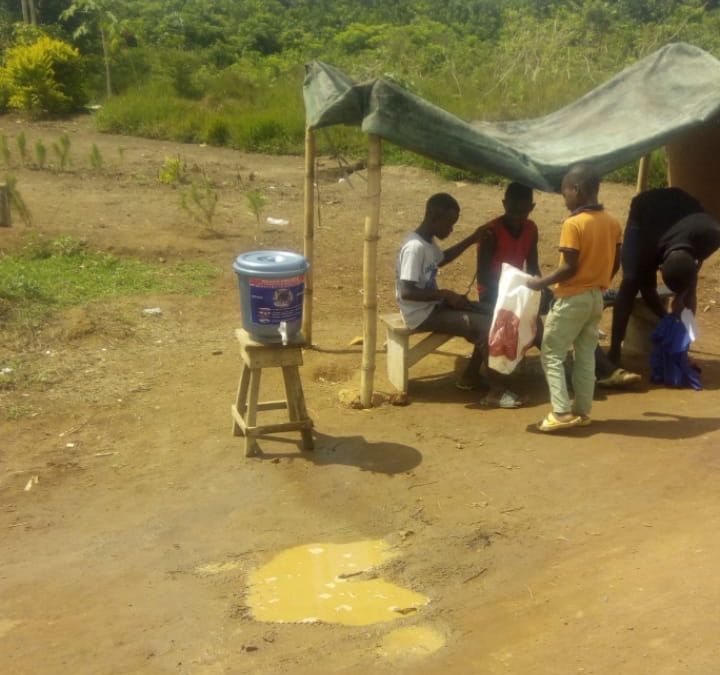 Monrovia – The fight against the spread of the novel COVID-19 in the country has provoked the spirit of voluntarism as youths across Monrovia and some parts of rural Montserrado have adopted the setting up of hand-wash stations at various community entrances as a means of enforcing community adherence to approved health protocols in combating the killer Coronavirus disease.

Young people across Monrovia and its environs have at the entrances of various communities erected their hand washing stations, ensuring that anyone entering their respective communities submit to the hand-washing and other health protocols announced by health authorities.

Since the health authorities announced, through President George Weah, the first case of the deadly virus in the country, social distancing, face-masking, and hand-washing amongst other protocols were declared as protocols necessary for the containment and prevention of the spread of the global pandemic in Liberia.

District  and county authorities have since engaged at the community level with series of activities aimed at promoting the fight against the COVID-19, including the distribution of disinfectants to help bolster national efforts at containing and preventing  the spread of the virus.

The level of community involvements, Mr. Moses Sarwee said, has encouraged the youths to have launched the voluntary service of mounting hand-washing stations around Monrovia, which is the epic-center of the COVID-19, and its environs.

The health protocols that have all been enforced by community youth voluntary services, especially focused on the hand-washing protocol, our reporter observed.

The community youth involvement, an elder man who was making his way into the Pipeline said in appreciation, that the voluntary service initiative is an effective way to sensitize residents of urban Montserrado County about the hygiene protocols announced by the government for the COVID-19 fight.

However, the situation is different for Rural Montserrado. Many of the young people who have been trying to follow similar pattern of community sensitization at entrances in urban communities  have been facing challenges, such as the lack of disinfectants,  including soap, chloride and others.

During a visit to lower Virginia and the City of Clay Ashland, our reporter was told that the lack of these materials continue to impede progress in their voluntary actions in the fight against COVID-19 in rural communities.

It was also gathered that community dwellers are struggling to ensure that the health protocols are observed. Though they used water frequently, but the lack of soap and other disinfectants are difficulties they encountered daily against the standard hygiene practices pronounced by the government. Henry Kerkula is one of the young men posted at an entrances of the City of Clay Ashland. He disclosed that rural community youths have been using their own innovative ways to combat the pandemic since its outbreak. “We need to help our people in the community [know] the danger about the virus and what they need to do to be prevented [from infection]”

He furthered, “No help from anyone to support our effort, no soup, no chloride; and even buckets for homes in the community cannot be seen anywhere. This is very bad.”

When asked what containers are used to keep people washing their hands, Kerkulah said, “… We have to use some old gallons bored at the bottom with a steel nail, which when removed allows water run out of it for hand washing; and in that process we give the person coming into the community a piece of soap to wash their hands before leaving the station. But whenever the nail is pushed back into the gallon, water stops running from the gallon”.

He said there are other innovative ways rural people use to keep washing their hands and observe social distancing.    He averred that those who are engaged at the various entrances are asked politely to submit to the hand washing protocols. For those who are motorists, they normally appealed to the occupants to disembark to ensure compliance with then protocol.

Kerkulah lauded residents of communities for being cooperative during this fight against the spread of COVID-19. “We are happy that our people are listening to us. This is very good for the fight against the virus and we look forward to our local and national government for assistance in the process’’

Speaking to this reporter, Clay Ashland City Mayor Richard Henry said he has constituted a local taskforce to help engage all citizens to be in adherent to the health protocols.

Mr. Richard thanked community people for their steadfastness in adhering to self-preventive measures in the absent of national supports.

“I want to help my people, but the hand is not there. Since the outbreak I was only able to receive a single bucket which is placed at the palaver hut and used by residents and other commuters to wash their hands,” he said.

His testimony was confirmed by a team of reporters visiting site, which could see the only hand-washing bucket right at the front his residence which was noted to be the most visited spot for handwashing.

Clay Ashland is a township of more than ten thousands residents with limited health facilities. Residents of the township of Clay Ashland travel longer distances to seek medical treatment.

A young lady in her early 20s expressed how worried she is over the news of the virus, and asserted that she wishes that the virus will never infect anyone in their community.

The lady, Gethrude Morris, explained that the community is a hard to reach area. She believes it will be devastating should covid-19 enters the community. “Where I am right now, I’m very worried about this whole virus thing; we are here with no hospital….”

She said to find paracentamol for common headache is difficult, and wonders where Coronavirus patients will be taken to should there be any case.

She furthered that as the result of her fear, she has encouraged her six children and her husband to spend most days at their farm at the community.

“Yeah oo! My husband and children have decided to spend all of our time on the farm in order to avoid meeting or touching people. When we get home, we make sure we walk to the city mayor house and wash our hands. We do the same thing before we go to the farm in the morning.” She added.

From all indication, the approach by many residents pf rural Montserrado county appears to be proactive in spite of low support to their endeavors.

Vigilance at all level has been triplicated, as residents hold the believed that they must stand for themselves because according to them, the government does not have the capacity to reach out to every spectrums of the society.