Kakata – Margibi, a county worst hit by the Ebola epidemic of 2014-2016, is still struggling to prepare and respond to the coronavirus outbreak which has now infected 25 persons in the county.

Health workers are worried that the lack of medical supplies to the health facilities in the county makes them more vulnerable when responding to COVID-19.

Despite being the second worst hit county by Ebola in Liberia (the first being Montserrado), the county is still struggling to keep its Kakata-based C.H. Rennie Hospital afloat, amid growing threats from the coronavirus pandemic – with 25 confirmed cases and one death recorded in the county so far.

The main hospital, like other clinics, faces several challenges including the lack of gloves, nose masks, personal protective equipment (or PPEs), and inadequate bed capacity, among others.

It is also being challenged with a nonfunctional x-ray machine, only one ambulance, a lack of vehicles for health workers, and reliance on a list of 40 volunteers, who are not on government payroll. 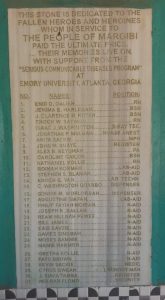 A a marble stone on the wall of the C.H Rennie Hospital  in remembrance of health workers who died from Ebola between 2014-2016 | Photo By: Emmanuel Degleh

Despite these challenges, the hospital provides health care for over 300,000. Those seeking health service at the hospital also come from parts of Grand Bassa, Bong, Montserrrado, and Gbarpolu Counties. And they are often asked to procure drugs at private drug stores due to the lack of regular drug supplies.

Since the COVID-19 outbreak, the hospital has not received any support from the county authorities despite promises by the Legislative Caucus.

Amid these long existing challenges, it is the safety of health workers that appears to be the most alarming concern now, says Mulbah Saywayla, administrator of the hospital.

“Our first and paramount concern is the safety of our health workers. If you are not safe and protected you can’t provide another person’s treatment,” said Saywayla, who added that health workers need gloves, nose masks and PPEs.

Health workers at the hospital who became infected with the Ebola virus had little or no knowledge about preventing the virus during the onset of the outbreak in the country, he said, adding that during that time, a lack of PPEs also put them at greater risk, as they continued to provide care for the sick.

Amongst health workers who survived the scare of EVD is Keanie Brown, an ambulance nurse who was with the county’s response team during the Ebola outbreak. 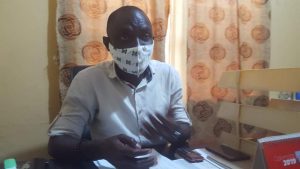 CH Rennie Administrator, Mulbah Saywayla, says one of the hospital’s main concerns is the lack of PPEs and gloves for health workers |Photo by Emmanuel Degleh

Aware of the threat of a virus, she is concerned about the limited training she has acquired to respond to COVID-19.

She has basic knowledge about the signs and symptoms of COVID-19, but has no further training as a nurse working in one of the local public health facilities in the county.

Meanwhile, she is worried that the continuous denial by many people – who continue to say that COVID-19 is not in Liberia – puts health care workers at risk, since they will have to treat people who are sick and don’t believe the virus exists.

The Officer in Charge (OIC) of one of the county’s clinics, who asked for anonymity to avert reprisal from the county health authority, has not received drugs and other medical supplies including nose masks, gloves, and PPEs.

“We have to compel patients to buy hand gloves if their case requires physical touching, [especially] pregnant women who come to give birth, because we have to protect ourselves,” the OIC said, who added that the clinic also lacks water and electricity.

“Heath workers at the facility have to often go in the community to fetch water from hand pumps at night hours.” 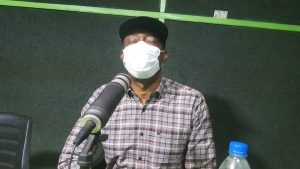 Meanwhile, there are also concerns about the lack of isolation center in the county for people who test positive for COVID-19.

Most of those suspected of the virus, or who have been traced to a confirmed case of the virus, have been in self-quarantine, while few others have been put in isolation at a senior high school on the plantation of the Firestone rubber company.

Dr. Myers Pajibo, the county health officer, recently told a local radio station that securing an isolation center remains one of the major challenges of the health team.

“We are working in partnership with the county officials to see how we can enter an agreement with a private property owner, to be used as an isolation center,” Pajibo said.

Emmanuel Degleh has over a decade of experience working as a community radio broadcaster. He is the former Margibi correspondent for the Liberia Broadcasting System and the current Manager and Co-Founder of Classic FM 93.9 MHz, one of Liberia’s leading community radio stations in Kakata, Margibi County. Emmanuel is also a member of the Press Union of Liberia, an aspiring investigative journalist, Secretary General of the Mental Health Reporters’ Network and a 2016 Internews' Health Journalism Fellow.