The division of immunization of the Ministry of Health has embarked on a weeklong supportive supervision of Health facilities in the county.

According to the immunization team lead, Pual Waylee, the exercise is aimed at carrying out training of health workers for and carry out awareness bout vaccination of children amid the coronavirus pandemic. Many people have reportedly refused for their children to be vaccinated following misinformation about the coronavirus in the country.

Gbarpolu County: Getting Ready For Election 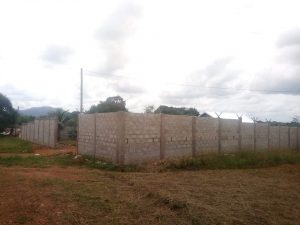 The local NEC office has began building a concrete fence around its warehouse in Bopolu City ahead of this year’s special senatorial elections |Photo By: Henry Gboluma, Jr.

Ahead of this year’s referendum and special senatorial election, the National Elections Commission (NEC) has begun renovating its warehouse in Bopolu City. The facility is used to store election materials.

The local NEC office said the renovation is being supported by the United Nations Development Programme (UNDP). The work includes building a concrete fence around the warehouse.

The ongoing works is expected to be competed at the end of June, according to Senior Elections Magistrate, Ernest MacCay.

Several people in Bopolu City have welcomed the ongoing works and termed it as “security for the property of NEC in the county’. There are lingering fear about the conduct of the elections and a national referendum as the number of COVID-19 cases increases.

Over 200 angry people in Pearchuzohn community, Buchanan city mauled an unidentified man to death on Thursday, claiming that he was a notorious criminal.

Philip Gongar, the county’s community policing head, later described the incident as “mob violence” because it was not proven that the man was actually a criminal.

The incident, which echoes the issue of mob justice in the county, also saw the crowd breaching the social distancing health protocol. Many of them were not wearing face covering or kept the six- meter distance as they beat the man with clubs and sticks.

The county has a total six confirmed cases – three have been released from the treatment center while the others are in isolation. Public health experts have recommended social distancing, wearing of mask in crowded places and frequent washing of hands to prevent the spread of COVID-19. 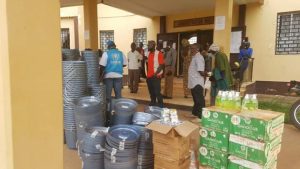 The UN Agency made the donation to the county on Thursday, June 11 | Photo By: Ben Brooks

The United Nations High Commission for Refugees (UNHCR) has joined the fight against COVID-19 in the county. On June 10, the UN agency donated anti-infection prevention control materials to the county administration.

Presenting the materials, UNCHR Officer in Charge, Mr. Emmanuel Kanga said the agency observed that many homes outside Zwedru lack hands washing buckets, so the buckets should be distributed to them.

Receiving the materials on behalf of the county, Assistant Superintendent for Development, Betty Breeze Doh thanked the UNHCR and promised that the items will be distributed to the “most needy, especially people in rural Grand Gedeh county”. 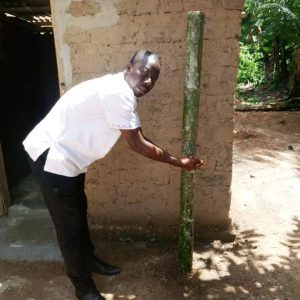 The Commissioner of Bong County Electoral #3, Washington Bonnah has embarked on a rigorous awareness campaign against COVID-19.

“We are encouraging everyone through our town chiefs to plant hand washing reed near their houses,” said the commissioner, who has also erected several of the reeds at the entrance of home.

“We know that the government cannot do all, so we as local people need to now take the message from community to community.”

The reed, which is usually six-meter-long, is used to store water for washing hands. In the absence of bucket and faucet, many rural communities across the country have adopted this new method of storing water for hand washing.

Mr. Bonnah said, “My team and myself will also use radio stations in the county to air our message through English and our local languages. We will also travel from house to house in the district with this awareness.”

In another development, Orange Liberia on Thursday, June 11 donated food and non-food items to the county administration. It donated 50 bags of 25kg rice; 10 boxes of baths soap, 100 pieces of nose masks and other materials as a means of helping to fight COVID-19.

Bong County Superintendent Esther Walker received the materials and thanked the GSM company, adding that the “materials to the county will be recorded in the history”.

The Clar Weah Foundation has donated food items to old folks’ organizations in the county.

The Liberian First Lady’s foundation donated assorted food items to God’s Revelation Old Folks network of Liberia and the National Senior citizen of Association – all based in Kakata.

The gesture, which includes 1,000 pieces of locally made nose masks, 160 bags of 25kg rice and 172 containers of three gallons vegetable oil.

Arthur Doglas, communications officer for the foundation, said it was part of MERK Foundation and Orange Liberia’s support to First Lady’s foundation.

Koboi Weedor, Administrative Assistant, thanked the foundation for the intervention.