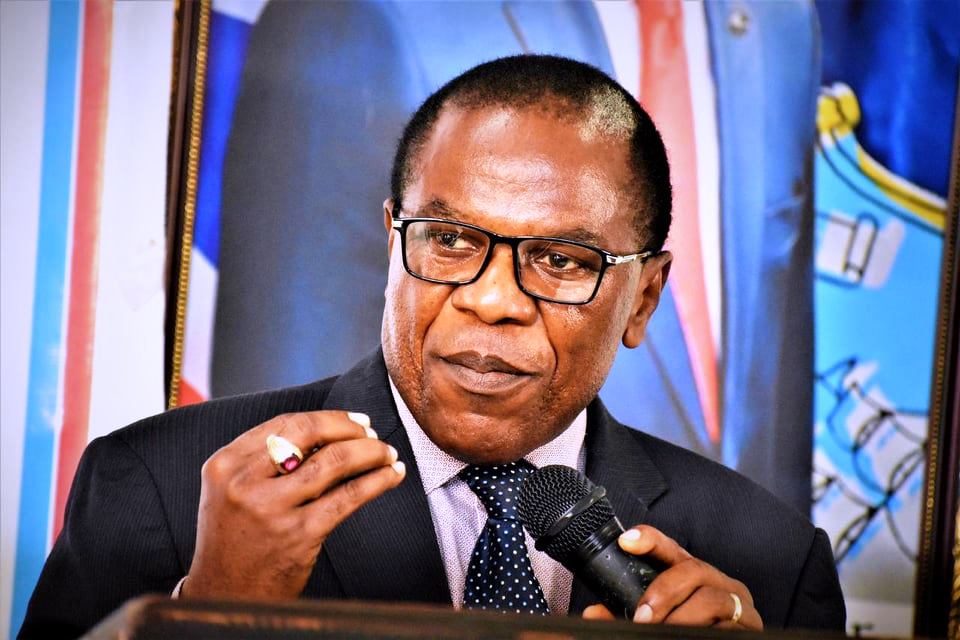 Monrovia – Liberia’s Chief medical officer Dr. Francis Keteh says the saliva of COVID-19 infected patients can harbour half a trillion virus particles per teaspoon, and a cough aerosolizes or converts into a diffuse mist”.  The Liberian medical expert indicates that this makes the spread of the novel coronavirus fast amongst the human population if preventive measures are not adhered to.

Appearing on a talkshow recently on the Strong FM 98.3, Dr. Keteh drew hypothetical scenarios highlighting processes that involve the spread of the COVID-19. “Take for instance you call a friend and arrange to meet for lunch; you choose a place with outdoor seating which seems be safer. As usual, you take all reasonable precautions, using hand sanitizer, sitting a good distance from other customers, and try to avoid touching your face,” the Chief medical officer said.

But Dr. Keteh confirmed the existence and proceed to explain its mode of transmission. “What you don’t know is that ten days ago, for instance, your friend’s father was a guest of his business partner at home, where he contracted the novel coronavirus from his friend.

Three days after that, he coughed into his hand before opening the door of his apartment to welcome his son home.   In a situation of that nature, your friend would take a breath and 32,456 virus particles would settle onto the lining of his mouth and throat as he walks through the door,” Dr. Keteh said

According to him, “when one of the droplets of the contaminated saliva gets drawn into the branching passages of the lungs, it settles on the warm, wet surface, depositing viral particles into the mucus coating the tissue.”

The medical practitioner indicated that each particle is round and very small; and that if it is magnified such as a human hair so that it was as wide as a football field, the Coronavirus particle would be four inches across.

The outer membrane of the virus consists of an oily layer embedded with jagged protein molecules called spike proteins. These stick out like the protrusions on a knobby ball chew toy. In the middle of the virus particle is a coiled strand of RNA, the virus’s genetic material, Dr. Keteh explained.

The viral RNA gets busy, and the cell has its own genetic material, DNA that produces copied fragments of itself in RNA form. These are continuously copied and sent into the main body of the cell, where they provide instructions for how to make the proteins that carry out all the functions of the cell. It’s like Santa’s workshop, where the elves, dutifully hammering out the toys on Santa’s instructions, are complexes of RNA and protein called ribosomes, the Chief Medical Officer further explained.

He said as soon as the viral RNA encounters a ribosome, that ribosome begins reading it and building viral proteins. These proteins then help the viral RNA to copy itself, and these copies then hijack more of the cell’s ribosomes.

Other viral proteins block the cell from fighting back, he disclosed, saying that soon the cell’s normal business is completely overwhelmed by the demands of the viral RNA, as its energy and machinery are occupied with building the components of countless replica viruses.

As they are shaken, these components are transferred on a kind of cellular conveyor belt toward the surface of the cell. The virus membrane and pointed proteins wrap around RNA strands, and a new particle is ready. These collect in internal bubbles, called vesicles that move to the surface, burst open, and release new virus particles into the body by the tens and hundreds of thousands, he noted.

Dr. Keteh further noted the “spike proteins that haven’t been incorporated into new viruses embed themselves directly into the host cell’s membrane so that it latches onto the surface of an adjacent cell, like a pirate ship lashing itself to a helpless merchantman. The two cells then fuse and a whole host of viral RNA swarms over into the new host cell”.

With all the viral cells up and down the lungs, throat, and mouth, Dr. Keteh said the scene is repeated over and again as cell after cell is penetrated and hijacked. Assuming the virus behaves like its relative, the severe acute respiratory syndrome (SARS), each generation of infection takes about a day and can multiply the virus a million fold, Dr. Keteh said and added. “The replicated viruses spill out into the mucus or saliva, invade the bloodstream, and pour through the digestive system.”

The medic continues “a person may not have felt any of these but rather may have felt totally fine. But as  a dutiful citizen, one may be staying at home to practice social distancing for about two days of or more but may have seem the fast and furious too much to the extent that it may appeared  that his/her  mental health is at risk if s/he doesn’t get outside.

“You (for instance being the person) call up an ex (boy or girl friend), and she agrees to meet you for a walk along with you. You’re hoping that the end-of-the-world she might kindle some afternoon recklessness, but the face mask she’s wearing kills the vibe. Also she tells you that she’s decided to move in with a guy she met at Landmark,” he narrated.

According to him, “You didn’t even know she was into Landmark. She gives you a warm hug as you say good-bye, and you tell her it was great to see her, but you leave feeling deflated. What she doesn’t know is that an hour before, you went to the bathroom and neglected to wash your hands afterward.”

The invisible faecal smear you leave on the arm of her jacket contains 893,405 virus particles. Forty-seven seconds after she gets home, she’ll hang up her coat and then scratch an itch at the base of her nose just before she washes her hands. In that moment, 9,404 viral particles will transfer to her face. In five days, an ambulance will take her to the hospital that is according to reaches by me.

Like retail chain gobbled up by private equity, stripped for parts, and left to die, Dr Keteh said the infected cells spew out virus particles until they burn themselves out and expire. As fragments of disintegrated cells spread through your bloodstream, he indicated that the immune system finally senses that something is wrong, white blood cells detect the fragments of dead cells and release chemicals called cytokines that serve as an alarm signal, activating other parts of the immune system to swing into action.

When responding, immune cells identified, a cell that has become attack and destroy them by infected ones, and a microscopic battle of the Somme is rages with the immune system levelling its Big Berthas on both the enemy trenches and its own troops. As the carnage mounts, the body’s temperature rises and the infected area becomes inflamed, Dr. Keteh quotes the world Health Organization says.

The Chief medical doctor further said two days later, the infected person would realize that the thought of eating makes you feel nauseated, s/he chooses to lie down and sleep for a few hours, and then awake just to realize that his or her case has worsened with the chest tight, while the  dry cough that just won’t quit.

At this point, one may think that it might just be the regular flu, and even if worse becomes to worst, “you’re young and otherwise healthy. You’re not in the high-risk group.”

For most people infected with the coronavirus, the get better with bed rest, they get better. “But for reasons, some scientists don’t understand, about 20 percent of people get severely ill. Despite being relatively youthful,” Dr. Keteh added.

He maintained that’s not the worst of it, the intensity of the immune response is such that under its onslaught, organs throughout the body are shutting down, a process he referred to as multiple-organ-dysfunction syndrome.

When your liver fails, it is unable to process toxins out of your blood, so your doctors rush to hook you up to a round-the-clock dialysis machine. Starved of oxygen, your brain cells begin to expire.

He pointed out that as the last cells of your cerebral cortex burst in starburst waves, like the glowing algae in a midnight lagoon, the patience you finds himself in an isolation ward, where the patience your electrocardiography or EKG goes to a steady tone. The doctors take away the ventilator and give it to a patient who arrives and in the official records of the COVID-19 pandemic, the patience will be recorded as victim.