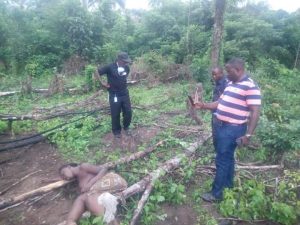 Police officers on the crime scene – where the woman had reportedly gone to prepare the land for planting when she was discovered dead |Photo by: Henry Gboluma, Jr.

The joint security force of Gbarpolu County has launched investigation into the death of a pregnant woman, who was found dead on her farm.

Yama Massaquoi’s lifeless body was discovered on her rice farm on Wednesday, June 17 near Bopolu City, according to police. The cause of death is yet to be determined, according to the police.

Family sources told LocalVoicesLiberia on June 18 that the deceased, who was seven-month pregnant had gone to clear her farm for planting rice when the incident occurred. They added that Yama went alone on the farm.

The County Health Team (CHT) has recorded it first COVID-19 Case. The case was confirmed on June 17 after a male ERU police officer tested positive.

The patient, who had just taken assignment at the populated mining town of Kinjor in Gola Konneh District where mining company Bea Mountain operates, is in isolation at the county’s COVID-19 treatment center in Robertsport.

The center is being managed by the CHT, which recently told reporters that several health workers have been trained to manage COVID-19 cases.

Meanwhile, 19 other police officers, who came in contacted with the confirmed case, are being quarantined in Kinjor. 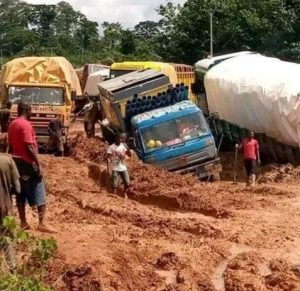 County Surveillance officer Naomie Toe says, “If Liberia wants an improved health system, then roads connecting to health facilities – be it private or public – must be improved”.

She was particularly referencing the Southeastern part of the country, where deplorable road condition is making movement of people  including accessing health facilities very difficult.

This is making the work of health workers even more challenging as the country struggles to curb the spread of COVID-19, Ms. Toe said.

“We suffer a lot in reaching out to our surveillance team in the various health districts just to get report in River Gee,” she lamented. “Let this Government see reason to improve roads condition in our region we tired [of] suffering”. 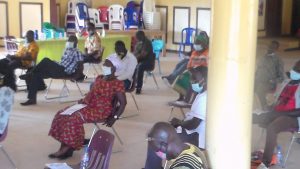 Participants of a two-day regional dialogue on malaria prevention and control during the coronavirus pandemic have called on the Government to improve the southeastern roads especially the Ganta-Zwedru corridor.

The dialogue, which was held in Zwedru, brought together over 50 participants from River Gee, Sinoe, Maryland, Grand Kru and Grand Gedeh Counties.

Health stakeholders in the region said the deplorable road condition is a major challenge hampering the “timely delivery of medical and non-medical supplies to counties in the region”.

Dr. Augustine Fannieh, Grand Gedeh County health officer, said at the meeting: “Most of the time we go out of drugs especially made for malaria treatment, at the end result, citizens complained that government referral hospitals lack drugs and asked them to buy their own drugs this is one of the major factor”. 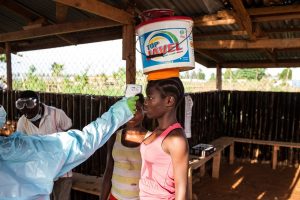 In a move to re-enforce health protocols instituted by the Ministry of Health, the County Health Team on June 19, began a massive COVID-19 awareness campaign in the county.

Augustus Nugba, the County Health Promotion officer, said since the confirmation of the first and only case in the county, many people are not abiding by the health protocols.

She warned that washing hands and practicing social distancing are being ignored, something that has prompted the launched of awareness campaign.

“As part of our responsibility as health promotion officers in the county, we have come out using the PA system to reawaken the minds of the citizens to go back to observing the health protocols,” Ms. Nugba said. 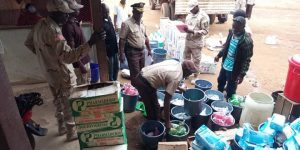 The supplies to the LIS County Detachment will enhance the preventive measures against COVID-19 at check points | Photo By: Arthur Koweh

Receiving the items, the LIS County Commander, Vivian Richards, noted that the supplies came in “timely and in the right direction”.

Richards promised to distribute the items to all the various check points in the county to boost the fight against COVID-19.