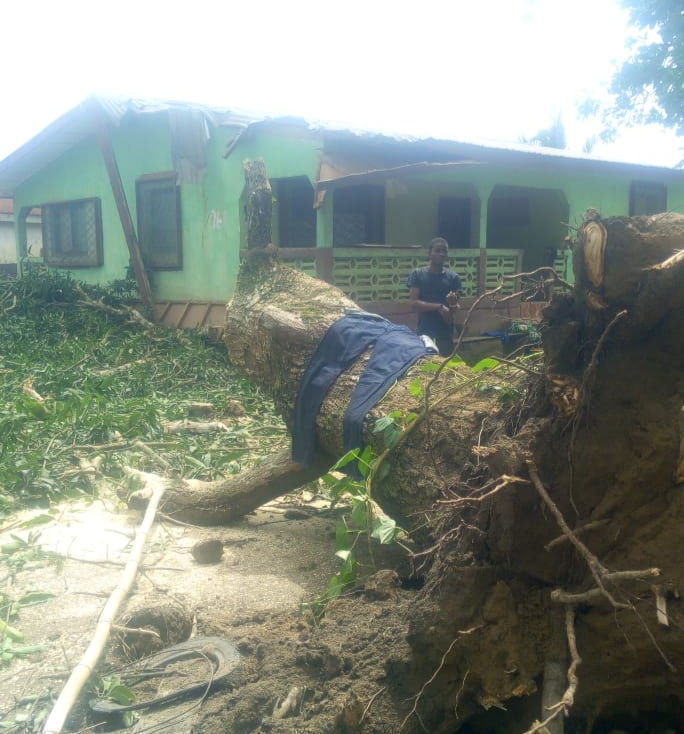 Gbalatuah, Bong County – A violent storm has caused a “serious” humanitarian situation in a populated Bong County town, leaving over 8,00 residents homeless, according to local authorities.

The storm, which occurred about 7pm on Wednesday, June 17, ravaged homes in Gbalatuah in Zota District. Many residents of homes affected by the storm are now homeless; some say they are sleeping in the open | Photo by: Emmanuel Mafelah

At least 300 houses were left damaged with occupants now displaced. Many families affected are sleeping outdoor as locals struggle to deal with its aftermath.

Public services including health delivery services have also been hindered in the city as many public facilities including the Gbalatuah clinic remain badly impacted.

Speaking to journalists in Gbalatuah, the Officer-in-Charge of the clinic, Kindness Forkpa, said they are currently finding it “very difficult to cater to patients going at the clinic to seek treatments”.

She also said several materials including stationaries got damaged by water after the storm deroofed the clinic building.

Madam Forkpa added, “Since Wednesday June 17 to present, we are suffering from the rain. Patients who come here for treatment sit in the rain and sun.” Many seriously injured people are calling for help from government and humanitarian organization | Photo By: Emmanuel Mafelah

She called on government particularly the Ministry of Health, and humanitarian organizations to “swiftly intervene to ensure patients seeking treatments at the only health facility get the needed quality healthcare”.

At the same time, several other residents, many of whom are children and the elderly, who are seriously injured are calling for intervention, appealing to the government and NGOs to come to their aid.