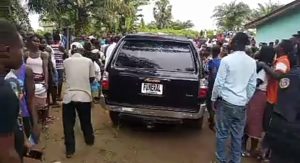 Hundreds of people, in violation of COVID-19 health protocols, gathered on the crime scene to see the police remove the corpse of the dead man.

The lifeless body of a 24-year-old man identified as Muhammed Carlos Kuyateh was on Tuesday morning discovered in Fairgrounds community, Buchanan city. There are speculations that he was murdered by unknown men.

Abu Fayiah, a relative of the deceased, said the 24-year-old was a footballer, who graduated from the New Testament Baptist School in Buchanan.

“My brother been in Monrovia for some time but he wasn’t well and so we decided to send for him to be with us,” Fayiah said. “He was taken to a nearby prayer house for prayer, but we don’t know how he left the place”.

Fayiah asserted that his brother had no criminal record and it was confusing to see him murdered, while calling for investigation into his death.

Hundreds of citizens, who rushed on the scene to see the body being removed by the police, were seen violating the social distancing and the wearing of nose mask health protocols.

Scores of them spent hours observing the corpse until the police remove it. Grand Bassa County has recorded 10 confirmed cases of COVID-19 as of June 22. 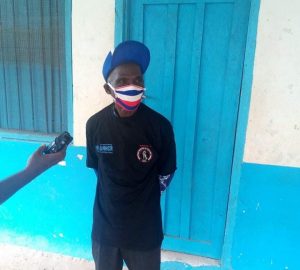 Gbehe Henri said the community is receiving protection, care and supports form the local government and the UNHCR

Ivorian refugees residing in the Prime Timber Plantation (PTP) outside Zwedru have praised the Grand Gedeh County administration for supporting their community to prevent the spread of COVID-19.

The refugee community’s clinic is part of several health facilities whose clinicians are benefiting from an Infection Prevention Control, IPC, training in the county.

He stressed that it is important for healthcare workers and others working with the public to understand IPC protocol.

Health workers need an understanding of how infections occur, how different micro-organisms spread, and the role they play in preventing the transmission of pathogenic microorganisms, he said.

“All healthcare workers need to be aware of the national regulatory or statutory requirements in order to meet the expected standards, demonstrating to service users that they are continually working towards ensuring that high standards of care are delivered,” Bao said following the training of health workers of PTP refugee clinic.

Speaking on behalf of the refugees, Gbehe Henri said the community is receiving protection, care and supports from the local government and the United Nations High Commissioner for Refugees UNHCR.

“Years backed, we used to buy land for farming or the owner of the land will allow us make the farm, time for heaviest the owner will come and tell you for your to divide the heaviest or you buy it from him/her,” Mr. Henri narrated.

“But two years ago, since we complained the matter to the county superintendent, UNHCR and LRRRC, UNHCR bought us 150 arcades of land for us to make our farms.”

He added that “because of Covid-19” the 150 acres of land is yet to be surveyed and divided among members of the community.

Kakata City has reported two confirmed cases of COVID-19 for the first time since the outbreak of the pandemic in the country. The county has recorded the second highest number of confirmed cases with 39 cases so far but its capital had only recently recorded its first two cases.

According to Dr Myers Pajibo, the County Health Officer, the cases were confirmed after two persons from the county voluntarily did their testing at the SKD Complex in Paynesville, Montserrado County.

The two confirmed cases are an Indian national and a Liberian – the both are residents of Kakata. But Dr. Pajibo is worried that the two persons may have given wrong identities when their samples were being collected.

However, the Indian man has been identified and taken into isolation at the 14 the Military Hospital while the identity of the other confirmed case is being investigated.

As a means of robustly fighting the coronavirus pandemic, a local organization, WE4SELF, [WE For Self] has denoted some asserted anti-COVID-19 materials and rice to the Sinoe Pastors’ Prayer Network and the E.J Grant Memorial.

Grace Brima, executive director of the organization, said it was necessary to identify with the religious community for its tireless efforts of offering prayers for the county and the hospital for caring for the sick during this pandemic.

Pastors and health workers are key players kicking this virus out of Liberia and as such there is a need to always re-energize them with little gifts, she said.

She also thanked people of Sinoe County for their commitment to observing the health protocols at their respective homes and churches.

Rev. Snoh Myers, District Superintendent of the United Methodist church, said since the outbreak, WE4SELF is the first institution to identify with the network. 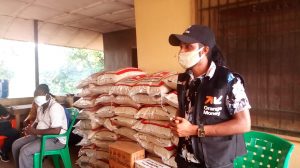 The GSM company made the presentation on Tuesday, June 23, to the county superintendent in Bopolu City

The GSM company made the presentation on Tuesday, June 23 to the county superintendent in Bopolu City.

“Bopolu is like any other city in Liberia,” said Augustus Saah of Orange Liberia. “This is why we are here and has also joined the health team with these bags of rice and soap as our continued contributions.”

Dr. Musa Zuanah, the County Health Officer, said, “This is timely, and we want to say thanks to Orange Liberia for this donation.”

He added that the food will be used to support residents who are self-quarantining and COVID-19 patients in Bokomu and Bopolu Districts.