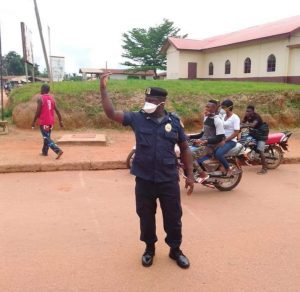 The security officers are also expected to enforce the additional 30 days State of Emergency although the county is yet to record a confirmed Covid-19 case. | Photo By: Ben Brooks

The Joint Security of the County have been called upon by the county authorities based on the advice of the county health team to begin enforcing the wearing of nose mask in the public.

The security officers are also expected to enforce the additional 30 days State of Emergency although the county is yet to record a confirmed Covid-19 case.

Superintendent Kai Garlo Farley said although his county is not affected by the extended SOE, people must adhere to the restrictions like other counties.

Superintendent Farley urged everyone to abide by the wearing of nose mask, restrictions of movement at the Cesstos River Bridge between Nimba and Grand Gedeh Counties and the 6 pm to 6 am lock down.

County Attorney Isaac B. Williams added: “According to the new mandate, only churches are to remain open, but all businesses like bars and restaurants, video clubs must close and abide by the order so as to save our county.”

Recently, the hospital temporarily closed its emergency room to the public after three nurses contracted the virus.

On Wednesday, Mr. Dweah told reporters that Dr. Sibley and additional seven health workers assigned at the Emergency Room who tested positive for Covid-19 have now being placed in isolation at the Phebe Hospital.

He said the patients will later be taken to the treatment center upon the completion of renovation works on the facility.

Meanwhile, several other persons are currently undergoing voluntary testing and the results will soon be made public, he said, adding that 98 contacts are also being traced.

At the same time, Samuel Kplaiwru, the Director of Communication of Phebe hospital, has refuted reports that the hospital has been closed to the public. He said the hospital will be disinfected due to the confirmed COVID-19 cases that have been recorded at the facility. 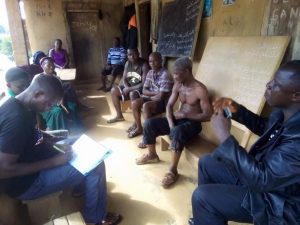 People of Porkpa District are calling on the United Nations Peace Building office in Liberia and the government to resolve an existing feud among locals in the area.

According to Commissioner Lawrence Brown, politicians have divided people in the district and there is a need to mitigate the long-standing tension that is triggered by political support.

Tension has heightened in the district since the end of Senatorial by-election in 2019. The district is segmented due to political affiliations, prompting local authorities to call for an urgent mitigation ahead of the impending Special Senatorial election later this year.

At the same time, Jamiyatu Watson paramount chief of the district, has called on the Government to intervene into existing land dispute among communities and families in the district.

The paramount Chief has urged the authorities to conduct a research and determine the root cause of all the other conflicts that persists in the district.

Amid the response against Covid-19, Representative Alexander Poure of Electoral District#1 has accused CHICO, a Chinese road construction company, of “many violations”. CHICO is constructing the Fish Town-Harper Road in the southeast.

In a communication written to CHICO, the lawmaker accused the company of “extracting” the county resources without full approval of the requisite authorities.

He accused the company of not providing benefits for affected communities, and that it is deliberate violating the environmental laws of the country.

The lawmaker also complained that the company is tempering with the forest reserves, amongst other alleged violations.

Lawrence Wrotuh, a resident of Fish Town, claims his house was affected by flood due to the obstruction of waterways by the company. 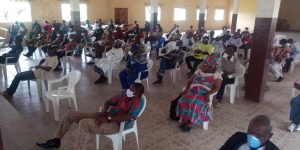 The forum discussed myths and public perceptions about Covid-19 and how they could be mitigated in the fight against the pandemic | Photo By: Arthur Koweh

The one-day event held in collaboration with the County Health Team, brought together the media, the religious council, the traditional council the motorcycle union, the youth, and the women, among others.

The forum discussed myths and public perceptions about Covid-19 and how they could be mitigated in the fight against the pandemic.

At the end of the event, the regional head of WHO, Dr. George Mulbah charged attendants to help fight myths and misinformation about the virus, which, he said, have the potential to undermine UN agency’s ability to defeat Covid-19.