Around The Country: Updates From Six Counties – July 8, 2020 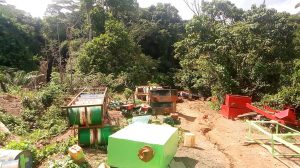 Despite a ban placed on the use of dredging machines on rivers, people of Gbarpolu County claim miners are still violating | Photo By: Henry Goboluma, Jr.

In an effort to enforce the ban placed on the use of dredging machines to mine in rivers, several youths of the county have called on the county administration to begin monitoring mining sites across the county.

Their concerns have heightened after noticing that about 12 dredging machines are being used in the Tumu River – known as a gold-rich river that runs through Korninga Chiefdom in Bopolu District.

Mabudu Moore, the head of the Bopolu District Youth Association, said it is time for the communities and the county leadership to work together to monitor mining activities.

“After our tour, we realized that people are still using dredges, and some are also transporting them on Tumu for mining. So, we want the county superintendent to take seize of the matter to protect our nature resources,” Moore stressed.

Meanwhile, the county superintendent has assured that his office will continue working with the Ministry of Mines and Energy to regulate mining activities in the county.

“What I am doing is working with the body responsible for that sector,” said Superintendent J. Keyah Saah.“If anyone takes advantage and put dredging machines on water to mine, we will not hesitate to seize it because dredge mining is ban in Liberia.”

The Administration of the African Fundamental Baptist Mission (AFBM) medical health center in Gbarnga has reopened the facility to the public following more than three weeks of shut down.

The health facility was on June 17, closed by the County Health Team after two of its Physician Assistants tested positive for coronavirus.

According to Bong county health Officer, Dr. Adolphus Yeiah, the entire facility was contaminated but has now been decontaminated after it was disinfected, adding that the administration was asked to reopen to provide health services for locals.

Aaron Kulah Garyemah, Administrator of the AFBM health center, said the decision to close the facility was to protect nurses and other essential staffs from contracting the virus.

Meanwhile, Dr. Yeiah has disclosed that the Phebe Referral Hospital in Suakoko District, which was also recently closed for disinfection after recording a handful of confirmed cases, will soon reopen to the public. 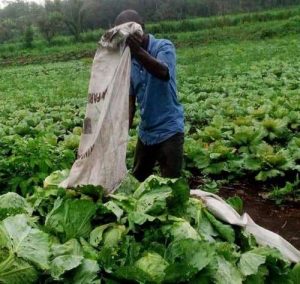 The farming group is determined to battle food insecurity in the country by growing of varieties of vegetable products including cucumbers, watermelons, and cabbage.

Amid the surge in confirmed cases of COVID-19 in the county, a group of local agriculture entrepreneurs has begun harvesting a vegetables on a massive farm  in the county.

The group of four headed by Christopher Mawolo is determined to battle food insecurity in the country by focusing on the growing of varieties of vegetable products including cucumbers, watermelons, and cabbage.

Mr. Mawolo said the group has been able to grapple with the economic uncertainties created by the pandemic by engaging in agriculture, adding “our family has never gone hungry during these hard times”.

He said with the ongoing harvest, they have supplied the local markets with fresh cucumbers, watermelons, cabbage, and other vegetables while also sending some supplies to markets in Monrovia.

Meanwhile, Mawolo is calling on Liberians to take advantage of the country’s rich soil by engaging in farming during a health outbreak that has created economic challenges and caused loss of jobs in the country.

In a move to enhance the work of the county response to the coronavirus outbreak, the United States Agency for Development (USAID) has donated a brand-new land cruiser jeep to the county health team (CHT).

“We are grateful to the USAID family because the vehicle arrived in the period of the raining season and it will enable us move freely around the county for monitoring and get to Monrovia so easily when we are called upon,” Dr. Fannieh said.

“Let me use this medium to called on other partners and donors to join the fight against this deadly disease – Covid-19 – for more support to the County health team. We still need your support.” 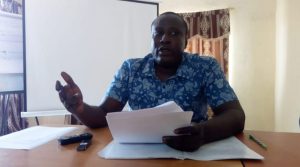 Dr. Tucker, speaking to reporters in Buchanan, said although the 10 confirmed cases have recovered, it is important for people to keep following the preventive measures | Photo By: Elton Wrionbee Tiah

The County Health Officer of the county has announced that the county is “COVID-19 free for now” as the 10 persons who tested positive for the virus have now recovered.

Dr. Anthony Tucker told reporters during a press conference that the CHT is still carrying out contact tracing in the county.

He cautioned every citizen to “remain cognizant of the health protocols”, adding that the pandemic is not yet over in the country.

The pronouncement made by the county Health Officer seems to have restored the hope of people in the county.

River Cess County: Stepping Out of The Studio with Help

A local community radio station, Echo Radio, has donated some essential drugs to three health facilities in the county.

Eric Opa Doue, CEO and Manager of Echo Radio located in New Yarpah Town, Central River Cess County, said “during humanitarian crisis, everyone including journalists need to do the extraordinary by stepping out of the studio”.

Officers-in-Charge of the various facilities that received the drugs thanked the management of Echo Radio and promised that the drugs will be used for the intended purpose.