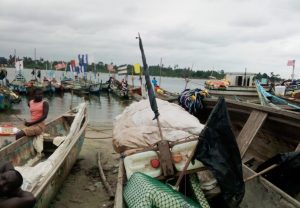 The project will include storage facilities, harbor for local canoes, and offices for NaFAA in the county | Photo By: By: S. Augustine Sokan

The fishing sector of the county is expected to boosted by the construction of a hygienic landing site and integrated post-harvest facility, which will help support local fishers and fish mongers.

A communication addressed to the County Superintendent Lee Nagbe Chea, from Madam Emma Glasco, head of the National Fisheries and Aquaculture Authority (NaFAA), requests the local authority to provide a public land space – not less than five acres along the coastline – for the project.

The letter states that the government through NaFAA received a loan from the World Bank to support the country’s sustainable management of fisheries project and it intends to use some of the funds to develop the county’s fishery sector.

Andrew B. Doe of NaFAA’s Sinoe County office says the project will include storage facilities, harbor for local canoes, and offices for NaFAA, among others

Meanwhile, Superintendent Chea has disclosed that his administration has already initiated discussions with the National Port Authority through the management of the Samuel Alfred Ross Port of Greenville to have the facility built within its vicinity.

Minister Sirleaf, who is on a county tour, spent 14 days in quarantine while in River Gee County after he came contact with a person infected with COVID-19 during a meeting in Maryland County during

Internal Affairs Minister Varney A. Sirleaf has successfully completed a two-week self quarantined in Fish Town. Minister Sirleaf was following the instruction of the County Health Team.

On July 2, Minister Sirleaf had made contact with a person, who later tested positive for COVID-19, while he sought to settle a land dispute among the peoples of Chedepo Geeken and Potupo Gbarquiah, as well as the peoples of Gbeapo Tartuken and Barrobo of Maryland County.

Dr. Trokon Washington, River Gee County Health Team, told reporters that the Minister was tested two times during the two weeks and the results were negative on the two occasions.

However, two individuals, whose names were withheld, part of the Minister’s delegation have tested positive for COVID-19, Dr. Washington disclosed.

Dr. Washington used the occasion to rally calls for high profile individuals within the government to follow the example of the Minister of Internal Affairs and team, adding that it would create an “enabling environment” to defeating coronavirus.

Minister Sirleaf thanked Dr. Washington and team for their response efforts against the pandemic and for caring for him while he was quarantined. He then cautioned locals against denying that the virus doe not exists. 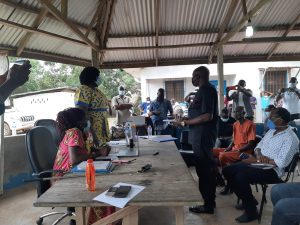 County Superintendent Aaron Vincent presents the documents file and rubber stamp of the CHT to new CHO Dr. Cecelia Woods Cheneyon as a symbolic takeover of the County Health Team on Wednesday, July 15, 2020.

The County Health team on Wednesday, July 15 received a new county health officer as the outgoing CHO, Dr. Netty N. Joe prepares to take a new role in Nimba County as the CHO.

Dr. Cecelia Woods Cheneyon replaces Dr. Netty, who urged her successor to “write her own narrative on a clean sheet of paper,” adding that she “must listen a lot but make her own determination when making decisions to move the CHT forward.

For her part, Dr. Cheneyon promised to work together with the team for the benefit of Grand Cape Mount County, while calling for unity among health workers in the county as they work to curb the spread of COVID-19.

The outgoing CHO was lauded for her “hard work” in leading the team against the coronavirus pandemic which has resulted to just one confirmed COVID-19 case in the county so far.

Dr. Joe thanked the partners for their support. She specifically mentioned the Bea Mountain Mining Company, describing the company as “one or those that volunteered and provided feeding for all of our staff who were quarantined.”

The 2.5KVA generator donated by Bea Mountain to the County Health Team being offloaded from a truck in Bo Water Side, Grand Cape Mount County

At the same time, Bea Mountain on Wednesday donated several materials to the health team including a 2.5kva generator to power the treatment center, at Bo Waterside Town. The company also donated a washing machines and dryer.

Presenting the items, Bea Mountain’s Community Relations Manager, Henry Vincent assured that the company, in the coming days, will begin the construction of the fence around the treatment unit in Bo Waterside and will also construct a waste management facility for the center.

Vincent encouraged the new CHO to “keep her communications line opened”, assuring that the company is willing to continue working with the CHT during the pandemic.

Meanwhile, on Tuesday,  fire gutted a three-bedroom house in Tiennii Town Tewor District, leaving one person dead and another seriously injured. The victim was rushed to the Sinje Health Center.

The cause of the fire is unknown, according to community members.

“This guy and his girl, who were in the house, do not smoke and they don’t have anything to do with current, so we are confused here and don’t know how the fire started,” said Musa Passaway, Youth Chairman of Tiennii Town. 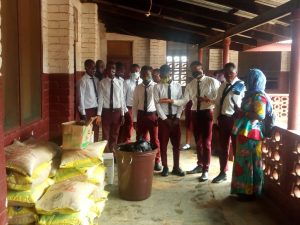 A consignment of 51 bags of 25kg rice, noise masks, handwashing buckets, powder soap and thermal flash was donated to each public schools.

Abdunah Yusufu, principal of Bopolu central high school, described the donation as timely, adding that the “targeted beneficiaries will get it”.

Thompson B. Kollie, the student council president of the Bopolu Central High, added: “Since we started school Action Aid Liberia is the only organization that has given us this kind of support, so we want others to follow suit to sustain us in school during this health crisis.”

The County Health Team has confirmed its third coronavirus case after less than one week when the second case  was confirmed.

County Health Officer, Dr. Sianna Jackson Mentoe, said the patient is a lab technician of the Dr. Duma Nimene Maternity Hospital in Sass Town. The patient contracted the virus while participating in a training in Harper, Maryland County, she said.

Dr. Mentoe told LocalVoicesLiberia Wednesday at her Barclayville’s office that most health workers at the hospital are now considered high risk contacts. Their specimens were collected and sent to the National Reference Lab in Monrovia for testing, she disclosed.

The patient is currently at the treatment unit undergoing medical care while all high-risk contacts are at the observation center, she said.

She disclosed that due to the confirmed case, the Dr. Dumu Hospital is now partially closed, adding that only emergency and maternal cases will be treated.

It can be recalled that the county was declared coronavirus free on June 11, after the County Health Team released high-risk contacts from the precautionary observation center.

Meanwhile, Dr. Mentoe said the county is challenged with providing food for people in quarantine.

Liberia’s Vice President Jewel Howard-Taylor has renewed government’s commitment to the protection of healthcare workers amid the coronavirus pandemic.

During a visit at the C.B Dunbar Maternity Hospital in Bong County, Howard-Taylor said the government is aware of the challenges confronting health workers who are responding to the outbreak and assured that the government and its partners are exerting efforts provide support.

She then commended health workers for their services, while expressing confidence that if regular hand washing and other health measures, including the wearing of masks, are followed, the spread of the novel Coronavirus would be reduced.

She revealed that the government and partners have acquired consignments of personal protective equipment (PPEs) for health workers and have instituted several measures to help combat the spread of the virus.

“We have always felt uneasy whenever we hear that a Liberian including a health worker dies from COVID-19,” she told health workers. “That is why we all must work together in mobilizing our various communities in eradicating this strange disease. 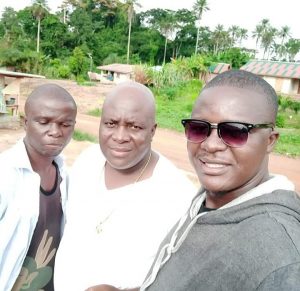 Businessman John Selma (middle) recently recovered from COVID-19; he says people of the county should stop the denial about the COVID-19 existence | Photo Provided By: Arthur Koweh

Amid the surge in the confirmed COVID-19 cases in the county, a prominent businessman, who was recently released from the treated center, has urged people of the county not to take the virus lightly. He urged them to follow all preventive measures suggested by health authorities.

“Today, I am out. Some people were even asking me not to agree to the result from the county health team, but I refused,” Selma said. “But thank God today I have successfully completed my quarantine [treatment] and I am free.”

He added that those in the habit of constantly arguing with health authorities over test results should stop and cooperate for “everybody’s benefit”. 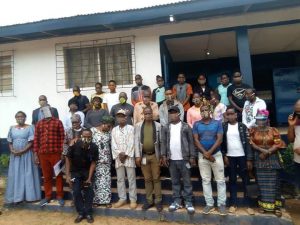 The lead facilitator of West Africa Network for Peace building (WANEP) Liberia has urged people of the county to “fight against sexual gender-based violence” amid the coronavirus pandemic.

Philips Kollie warned that cases of SGBV and other forms of human rights violation are increasing in the country.

He stressed that the protection of human rights during this health crisis must be everyone’s concern to ensure a peaceful society.

“If our women and children rights are violated through rape or any form of violence, it is going to have a negative impact on our society,” said Kollie at a one-day training-of-trainers workshop in Zwedru.

It brought together members of civil society organizations, women groups, traditional council the elders, youth groups among others

WANEP-LIBERIA is implementing the European Union and the UN Women five years Spotlight Initiative project focusing on the fight against SGBV and other form of violence.