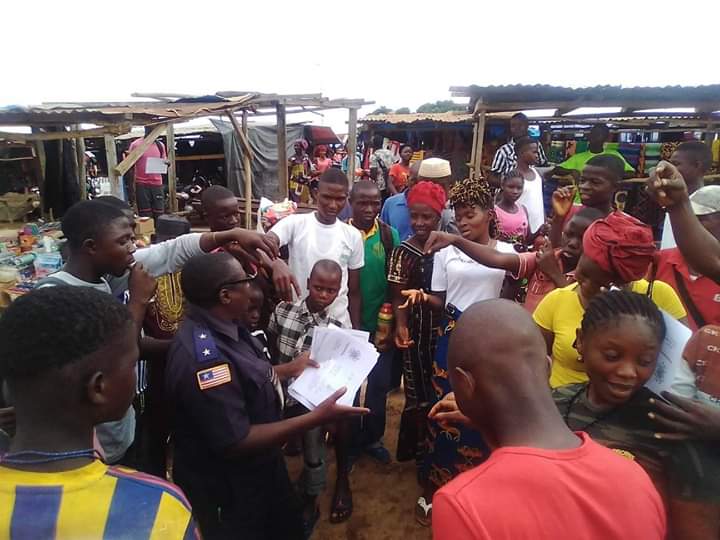 Zorzor, Lofa County –  Despite the hard lessons learned from the scourge of the Ebola virus outbreak because of denial that the viral hemorrhagic disease existed in northern Liberia, many people in Lofa County have again begun denying the existence of the novel Coronavirus and COVID-19 – another Zoonotic disease that has ravaged the entire world.

Ebola caused the death of over 350 people in Lofa County, leaving behind many orphans who are still struggling to survive. Denial amongst communities was considered one of the primary reasons that Ebola spread between 2014 and 2016, after the first infected person crossed over from Guinea into Foya District – the first community to record a confirmed case of Ebola in the country.

Months later, EVD had devastated the county, leaving behind a memory that remained fresh in the minds of many people – until the first confirmed case of COVID-19 was announced on April 10th, 2020, when the country recorded its first confirmed case. People were afraid that they were about to relive the devastation of Ebola.

Now, with the denial syndrome resurfacing amid another public health crisis, Alpha Tamba, the Lofa County surveillance officer, is worried that COVID-19 may also overwhelm the county if the denial continues.

As of July 12th, the county has recorded 22 confirmed cases of COVID-19, with four deaths and six recoveries. The CHT has traced over 400 contacts.

Voinjama, Foya, and Zorzor District have all recorded new confirmed cases in recent weeks. This is happening, as community members are refusing to change their behavior and follow the health protocols. Marketers gathered to sell their products at the general market in Voinjama in complete disregard for social distancing and wearing of mask| Photo By: Kolubah Akoi

Roland Akoi, a media executive who has been engaged in public awareness about the pandemic in the county, said communities’ response toward COVID-19 awareness has dipped.

“During our awareness on the COVID-19 tours across Lofa sometime in May and June, the citizens were very receptive and hospitable. They were very concerned and were willing to listen to us and even promised to adhere to every measure we told them about preventing their families, their towns and communities from getting infected with the virus [COVID-19],” he recalls. “But all these assurances have changed overnight.”

And the Surveillance Officer claims that doubts about the existence of the virus is impacting the way people take precautions and follow the preventive measures.

“This is not good for us as a county, and with this situation in the county, we are still hearing people saying that the virus is over,” Tamba said.

“People should stop making such statements and be vigilant, especially [by] adhering to COVID-19 preventive measures.”

He said the low case fatality rate of COVID-19 as compared to Ebola is deceiving Liberians into not taking the current outbreak seriously, adding that misinformation about the virus is also undermining the response effort.

“This is the same perceptions they [people] had when Ebola came to Lofa, and because of that, many people got infected and later died. Many people lost their lives for just denying the existence of Ebola virus, and here we are again denying that COVID-19 is a story we are making up to get funding. This is very worrying,” he said.

One COVID-19 survivor, who was released from the treatment center at the Tellewoyan Referral hospital in Voinjama more than month ago, still does not believe the virus exists.

Asked why he is in denial, Flomo (not his real name) said that, when he was taken to the treatment center, he was not given drugs until the date he was released.

“They [Nurses] only stopped by to greet us every morning; asked us how we were feeling, and they went by their businesses,” he said, adding that many patients were fed by their respective families.

He continues: “But just imagine, my wife, who slept with me day and night when I was sick, my four children and relatives who came to me before I was pronounced positive for the virus, never showed any signs of the virus until I left the hospital, and it is now one month four days.”

Like the recovered patient, 40-year-old James Beysah has similarly vowed never to wear face covering in public. He does not believe the virus is in the county.

“These health people looking for money; so, they are doing everything to get more patients to increase their money in their accounts. I believe that coronavirus is real, but it is not here in Lofa [County],” Beysah said. A view of the outside of Tellewoyan Hospital in Voinjama – one of the county’s two biggest health facilities | Photo: By Kolubah Akoi

Korpo Jallah is a businesswoman and a mother of four children. She too believes that the virus exists, but that there is no confirmed case in the county.

“You see my phone, my son bought it for me, and I see all the videos about this virus,” she explains. “How it can treat and kill people, so no one is going to use me because they want money from government.”

In addition to her denial, Jallah does not trust the health facilities in the county. She has vowed not to take her children for treatment there.

The denial about the existence of COVID-19 is becoming entrenched in the county, even as the number of confirmed cases increases.

Surveillance Officer Tamba says that, because people are not following the preventive measures, there might be a spike in new cases.

However, he called on communities to join the fight against the pandemic to avert a repeat of Ebola.

Jenkins Miliki Naima, Chairman of the Lofa Intellectual Gazebo (LINGA), is disappointed in the increase in confirmed cases. His organization had earlier set up its own task force to create awareness about the virus. That was after the County Health Team held a training workshop for members. Their mission was “to straightly preach messages from the relevant authorities and to distribute flyers” about COVID-19 to the communities. But he claims the group was never funded by the authorities to roll out the campaign.

“All we did was to task ourselves as members to reach out to individuals and institutions for financial assistance to allow us to fuel member’s motorbikes and print flyers,” he explains.

“We went from district to district, towns to villages, just to take the message to our people. Our feedback from the field was that 80-90% of people we talked to believed that the virus existed and were willing to take the necessary precautions to save their communities, judging from the Ebola experienced.”

But the challenging aspects in many of the towns he visited was the lack of hand washing buckets and preventive materials, Naima said.

Naima is worried that many people are not following the preventive measures while the county authority including the CHT “are not playing their leadership roles by keeping up with the awareness”.

“My heart is broken to even be hearing in our communities that COVID-19 is a makeup by government to get money. This is not good for us as people who went through the Ebola nightmare in 2014-2015,” he said.