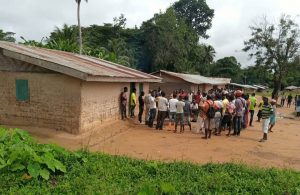 Residents of the town where the couple lived said they were living a quiet and happy life before his girlfriend accused him of having an affair with another woman |Photo By: S. Augustine Sokan

A man identified as Robert Dogmah, 46, on July 19 shot dead his girlfriend with a single barrel gun while she was taking her bathe. He then killed himself with the same gun, police said.

According to Bill Pyne, Inspector of Police in Tarjuwon District, before the incident, the couple was seen on the same day at the Plandialebo Mount Calvary Baptist Church at about 8 p.m. where they were settling a dispute.

His girlfriend, Susannah Wannyo’noh Wah, 50, had accused Dogmah of having an affair with another woman and impregnated the woman. Dogmah admitted to his girlfriend’s accusations and asked the clergyman to plead with her, the police Inspector added.  By 9 p.m. the couple was home when the incident occurred.

Josiah K. Menjay, General Town chief, said Dogmah, who was of the Kpelleh tribe, moved to the community in 2015 and began a relationship with Susannah. They were farmers and lived a quite life before the incident, Chief Menjay said, adding that the death of the couple was “strange [shocking] to the people” of the town. 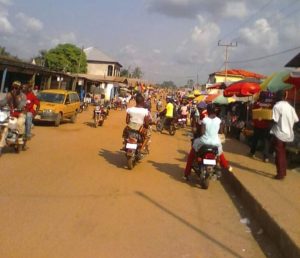 A 52-year-old man, who is a driver of a German international organization and a resident of  Zwedru, was tested positive for the virus in Monrovia on July 19.

Speaking at a press briefing on Monday in Zwedru, the County Health Officer said the patient was tested for COVID-19 during a compulsory testing initiated by his office.

Dr. Augustine Fannieh added that because of the confirmed case, 14 persons including the patient’s wife, children, and neighbors have been traced and have been asked to self-quarantine.

He said these contacts will soon be sent to the precautionary observation center, which is located outside Zwedru, where they will stay for 21 days.

Meanwhile, Dr. Fannieh has called on people of the county not to panic, adding that they should continue to follow all of the health protocols by wearing their nose mask, wash their hands constantly and avoid crowed places. 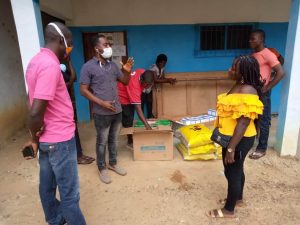 Materials donated, which cost is put at US$1,330, includes bags of rice and medical supplies

The Grand Kru County COVID-19 Technical Team has donated a huge consignment of food and non-food items to the County Health Team after additional six confirmed cases were recorded in the county.

Materials donated, which cost is put at US$1,330, includes bags of rice and medical supplies. The presentation was made at the week to the County Health Team at its office in Barclayville.

Estella Taypoh of the technical team said the donation was the institution’s way of identifying with the health team as the fight against COVID-19 continues.

Receiving the items, Grand Kru County Health Officer, Dr. Sianna Jackson Mentoe, lauded the County COVID-19 Technical Team for their kind gesture during the crisis, most especially the donation of the BP Cuffs, which has been their major challenge.

Phebe Hospital has been closed since June 26 after Medical Director of the hospital, Dr. Jefferson Sibley including several other nurses at the hospital tested positive for the virus

Phebe Referral Hospital in Suakoko District has resumed normal activities to the public after being closed for almost a month, the hospital’s Communications Director, Samuel Kplaiwru disclosed on Monday.

The hospital was on June 26, closed by the administration after advised by a team from the Liberia Incident Management System headed by Dr. Samson Arzoaquoio.

The facility was to be closed for about four days to allow it to be disinfected after several health workers at the hospital was tested positive, but the closure was extended.

Additionally, Mr. Kpalaiwru said some of the patients at the isolation wall (COVID-19) has recovered from COVID-19 including the Medical Director of the hospital, Dr. Jefferson Sibley.

The County Health Team headed by Dr. Adolphus Yeiah has been “instrumental and supportive” of the hospital’s plan to resume normal activities, Kplaiwru said.

He furthered disclosed that through the County Health Team and the Hospital Administration, Phebe Hospital can now boast of having a modern treatment center for patients.

Meanwhile, Mr. Kplawiru also encouraged citizens of the county and patients making use of the health facility to follow all health protocols prescribed by the Ministry of Health, the National Public Health Institute of Liberia and the World Health organization to stop the spread of the novel coronavirus.