River Cess County has recorded three new confirmed cases of COVID-19. According to Joseph Topor, River Cess Cess County Health Officer, the three new cases are all health workers who voluntarily had their specimen collected for testing. The three patients are two males and a female.

Topor told LocalVoicesLiberia that the specimens were sent to the National Public Health Institute reference lab in Margibi County.

This is exactly two weeks after the county recorded its first confirmed case – a 21-year-old female who died at the St. Francis Hospital in Cestos before her specimen tested positive. 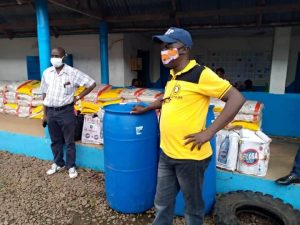 The diaspora Liberians donated several items including drums of fuel to the hospital and the community radio station | Photo By: Henry Gboluma, Jr.

The Association of Gbarpolu Citizens in Americas on July 24 donated 60 bags of 25kg rice and a drum of fuel to the County Health Team.

The hospital also received 500 masks and eight cartoons of chloride. A drum of fuel was also donated to the Voice of Gbarpolu radio station.

Former Liberia’s Lutheran Church Bishop, Sumowood Harris made the presentation at the Jallah Lone Hospital in Bopolu City on behalf of the diaspora Liberians.

“This is the initial donation from your friends, your fathers, and people in the USA during this pandemic,” Bishop Harris said.

The items were received by County Superintendent J. Keyah Saah and were subsequently given to the beneficiaries. Sup. Saah described the donation as ‘”life-saving” during this health crisis and called on Liberians in America to support the running of the main referral hospital by powering it with solar system.

Many people of Maryland County are said to be flouting the health protocol | Photo By: Bryan Dioh

Maryland County administration has begun enforcing drastic measures aimed at reducing the spread of COVID-19 in the county.

According to a release from Superintendent George Prowd, the Joint security has been mandated to enforce the wearing of nose mask in public places.

The release stated that the compulsory wearing of mask is in line with President George Weah’s mandate that calls for the enforcement of the health protocol.

The released also indicates that those found violating will pay a fine of L$1,000 before being released from detention.

Maryland County has recorded 23 confirmed cases of COVID-19 as of July 26, according to the National Public Health Institute of Liberia.

Meanwhile, Dr Methodus George, County Health Officer, said during a recent press conference that there are about 30 high risk contacts in the county that must be tracked in the communities.

The 30 high risk contacts are suspected of having physical interactions with a lab technician, who later tested positive for COVID-19.

Some Residents of the county has already started adhering to the preventive measures while many others are said to be denying that there is an outbreak in the county. 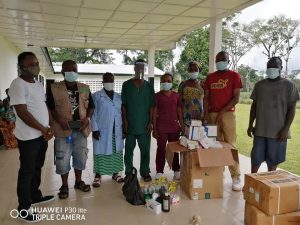 Global Gbarzon district COVID-19 response team has donated assorted medical and anti-coronavirus materials worth over US$4,000 to health facilities in the district | Photo By: Ben T.C. Brooks

In response to the fight against the global pandemic, a group under the banner, “Global Gbarzon district Covid-19 response team” has donated assorted medical and anti-coronavirus materials worth over US$4,000 to the district.

Materials donated include, thermometers, face and nose masks, cholera, assorted drugs, among others.

Speaking during the presentation at the Zleh Town Gbarzon health center, the group global public relations officer Washington Konmana Gboweo said the donation was a response to the SOS request made by the district health team.

Gboweo said the organization was able to rally among members to raise funds for the purchase of the materials, which were distributed to all six health facilities in the district.

Receiving the donation on behalf of the county health officer, the Officer-in-Charge of the Gbarzon health center, James Weedor, thanked the organization for the kind gesture and promised that the items will be used for its intended purpose.