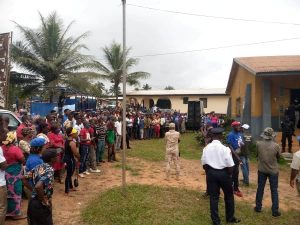 The CDC Primary in Pleabo city witnessed a huge crowd of partisans who were not observing the social distancing rule or wearing face covering | Photo By: Bryan Dioh

Health protocols are notably being ignored as political parties hold primaries in Maryland County ahead of the December 8 special senatorial elections. Amongst the violators are government officials and others who deny the existence of COVID-19 in the county.

A political rally recently held in Pleebo Sodoken District by the ruling Coalition for Democratic Change (CDC) saw hundreds of people gathered in violation of the health protocol declared by the Ministry of Health.

Many of them were not observing the social distancing or wearing of nose masks in public place protocols – which are major preventive measures to curb the spread of COVID-19.

There are increasing concerns that the flouting of the preventive measures during political events that converge large crowd of people could cause a spike in new cases.

As of July 30, Maryland County had recorded 25 confirmed cases, amongst them two deaths and 15 recoveries.

The breaching of the health protocols comes amid already heightened denial by many people in the county that the virus does not exist. 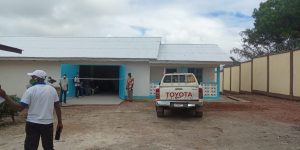 NEC Commissioner Barsee Kpankah said that the modifications have enhanced the capacity and independence of the commission | Photo By: Arthur Kowah

On July 30, the office of the National Elections Commission in upper Lofa County dedicated its modified facility. The modifications include concrete fence and a new warehouse. It comes ahead of the December 8 Special Senatorial elections.

The construction of the modern warehouse and fence was funded by the United Nations Development Program, UNDP.

Cutting the ribbon on the newly constructed fence, the County Superintendent William T. Kamba said while UNDP has done “tremendously well” by funding the project, it will take residents of the county to ensure proper care and maintenance of the facility.

For his part, NEC Commissioner Barsee Kpankpa thanked UNDP and said the absence of a fence and the lack of a spacious and conducive warehouse were major challenges for the commission activities in the county.

He added that on many occasions there were complaints of theft of properties and burglaries from NEC magisterial offices in the county.

“With this giant fence here, and this big warehouse, our work is made easy. We don’t have to worry about the vulnerability of our office anymore,” he said, adding that the modifications have enhanced the capacity and independence of the commission.

He disclosed that there is an ongoing construction of fence and warehouse at all NEC facilities across the 15 counties but added that the one in Lofa County is the first to be completed. 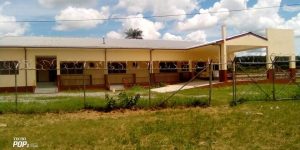 The county administration has been asked to ensure food is provided for COVID-19 patients at the treatment unit in the county.

Dorothy K. Toomann’s, Executive Director of the Development Education Network Liberia (DEN-L), call comes amid reports that patients at the center are not being feed.

Madam Toomann told LocalVoicesLiberia that during her visit at the facility, relatives of patients were seen protesting on the compound of Phebe Hospital, demanding the release of their family members from the TU.

Madam Toomann wants the county administration to urgently respond to the concerns of the patients, adding that during the Ebola outbreak there were a special committee setup by authorities in the county to raise funding for patients at the different treatment units, but that is not happening during the coronavirus pandemic.

For his part, the County Health Officer Dr. Adolphus Yeiah admitted to the report about the lack of food, adding that challenges at the center is increasing by the day.

He then appealed wil leaders of the county and national government to support the unit with food.

In another update from the county, NAYMOTE Partners for Democratic Development on Thursday held a day-long local Government Civic Engagement with local leaders in Jorpolue Clan, Jorquelleh District to strengthen local leaders’ participation in time of crisis and ascertain their experiences and ideas on COVID-19 response.

The engagement, which was funded by the National Endowment for Democracy, was held in Wainsue, helped participants learned about the local government structure and the importance of citizens participation in local governance. 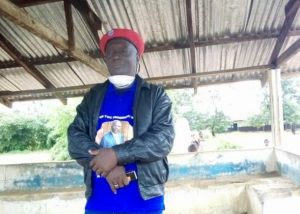 Kane Sabula said President Weah must fulfill his 2017 campaign promise or they will quite the ruling party | Photo By: Janneh Kamokai

The former town chief of Kinjor Town has warned that he and his people would withdraw support from the Congress for Democratic Change (CDC) if promises made by the President to the citizens during the 2017 elections is not met.

Mr. Kane Sabula said that the President changed the name of Kinjor to “King George”, promising if he were elected President, he would better the living conditions of the more than 10,000 residents of the town, where a multi-million dollar concession company operates.

Sabula lamented that since President George Weah was elected in 2017, he has not visited the town “to say thanks and live by his promises.”

“I brought over 60 persons to the primary on my own just to let the top guys in CDC know that we still hold the party at heart but if they can no longer come to us, me and my people will withdraw from the CDC beginning this coming December 2020 midterm elections as many politicians are calling day-by-day [for us to] join them,” Mr. Sabula said.

Meanwhile, Senator Victor Waston has won the CDC primary in the county on white ballot. He thanked the delegates and promise that “things will get better and continue to be”.