Around The Country: Updates From Five Counties – August 4, 2020 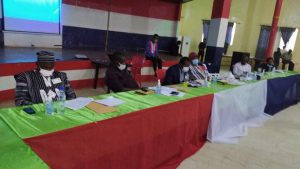 The extraordinary development sitting was held in Buchanan on August 1, with six out of seven lawmakers attending | Photo By: Elton Wrionbee Tiah

Stakeholders have concluded an Extraordinary Development Sitting, resolving to execute incomplete and undone projects in the county.

The sitting was called weeks after the government of Liberia released more than US$1.2 million to the county as its Social Development Funds paid by ArcelorMittal Liberia.

During the sitting, Representative Vicent Willie of Electoral District Four expressed dismay over the current state of health facilities in the county.

He said the lack of adequate drugs at health facilities have been a major challenge, suggesting an immediate intervention from the County.

According to the Project Management Committee (PMC) report, completing ongoing projects would require US$433,512, while US$438,500 is needed to begin new projects earmarked across the county; thus amounting to US$872,012.4 .

Some of the incomplete projects captured in the report are a commissioner residence and office, construction of bridge and youth center, cities beautification, supports to the county media, youth institutions, sports, the community of people with living with disabilities, and vocational training center, LOIC.

It was also revealed that the December 7, 2018 County Sitting resolved that US$740,999 is needed for projects implementation, but the county could not achieve such objective due to the unavailability of the projected fund. 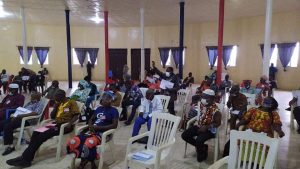 Delegates from across the county attended the sitting to decide the next development agenda for the county | Photo By: Elton Wrionbee Tiah

The delegates, who traveled from the nine administrative districts and four cities, also highlighted the need to provide support to the Liberia National Police Bassa Detachment, Fire Service and educational programs inclusive of the Community College and county scholarship scheme. The delegates also resolved that funds should be allocated for health centers across the county.

Meanwhile, the county has recorded additional 15 confirmed cases of COVID-19. Recently, 17 persons, most of whom are working at the Liberia Agriculture Company Hospital, were tested positive for COVID-19.

County Health Officer, Dr. Adolphus Yeiah, has called for collaboration from the communities, adding that it will enhance the fight against the coronavirus pandemic.

Dr. Yeiah emphasized that Liberia’s health system has been negatively impacted by years of major crises, ranging from the civil war to the Ebola epidemic, and now the coronavirus pandemic.

He is worried that the current health crisis is causing communities to “not have trust in the country’s health system,” like what occurred during the Ebola outbreak in 2014, when certain people resisted health workers from coming into their communities.

Dr. Yeiah said that during the outbreak of the Ebola in the county, community members expressed fear of seeking treatment at various health facilities on grounds they could be tested positive of the virus.

He stressed that concerted efforts and immense awareness can allay the fear of people, giving them renewed confidence in the health system.

He spoke with LocalVoicesLiberia in Gbarnga. The county has recorded 35 confirmed cases of COVID-19, five deaths and 26 recoveries.

The participants of the training were urged to “fully utilize the skills they acquired during the training” | Photo By: Arthur Kowah

The training was implemented by a local women NGO, Women Solidarity, Inc. (WOSI) with funding from UN/EU spotlight initiative.

Speaking to the graduates of the training at the weekend in Vezala Town, the Coordinator of the Ministry of Gender, Children and Social Protection in the Lofa, Madam Esther Koryon, urged the graduates to “fully utilize the skills they acquired during the training”.

“You can use these skills to start and run a successful business that will give you money to take care of your children,” she said.

For her part, the County Coordinator of the National Civil Society Council of Liberia, Madam Deddeh K. Kanmoh lauded the UN/EU spotlight Initiative for sponsoring the training of the women.

“We as civil society, you have done  so great for us. This is what we love to see because it is our job to advocate for the empowerment of our communities,” she said.

The county superintendent, health officer, management of Bea Mountain and community leader of Kinjor Town attended the event to declare that the patient had recovered

The only COVID-19 patient in Grand Cape Mount County was on August 3 released from the treatment center.

The patient, who is a police officer, was assigned in Kinjor Town, Gola Konneh District when he tested positive for COVID-19 on June 17.

A brief event held in Kinjor Town on August 3 to officially declared that the patient had recovered was attended by the county superintendent, the county health officer, and staff of Bea Mountain Mining Company, which operates in the county.

The COVID-19 survivor thanked God, the county health team and the management of Bea Mountain for the efforts and concern shown him when he was being isolated. He thanked the company for providing support to him through the county detachment of the Liberia National Police.

Hon. Pennue said the money is intended to provide launch for the senior students while they write the regional exams.

The Electoral District #1 Representative made the cash donation after winning the CDC primary on white ballot on August 1 at a congress held in the Zwedru City Hall.

Presenting the cash, Pennue said he is “not too educated as a lawmaker of the county” but cares about the students’ educational sojourn, adding that he will always be in support of people seeking after education.

According to the resource department of the county’s education office, there are 21 recognized registered high schools in the four education districts. The number of 12 graders preparing for the regional exams has not been disclosed by the CEO.