Around The Country: Updates From Five Counties – August 10, 2020

The county office of the FDA set the meat ablaze on Monday in Voinjama | Photo By: Arthur Kowah

The County office of the Forestry Development Authority on Monday set ablaze over L$1million worth of confiscated bush meat at its headquarters in Voinjama.

The meat was confiscated by FDA from four bush meat traders of Lukasu in Lukambeh District over the weekend.

According to the County Secretary of the FDA, the four women arrested were in violation of hunting protected species in the forest and will be forwarded to court for prosecution.

Mr. Ben Miller said although the FDA previously auctioned confiscated bush meat to the public, they have been instructed to burn them now.

“The Health Ministry has advised us that due to the current situation of COVID-19, we should burn any meat we confiscate”, he said.

Meanwhile, one of those accused of aiding the killing of protected species of animal stood by as the loads of dried meat was burning.

Sangay Kolee, who claims to be a widow, said she has been trading wildlife for survival and that the business is her source of livelihood.

“I don’t have man to help me, I have my daughter attending AME University in Monrovia, this meat is what I can sell to support her and be able to take care of myself, “ explains Kolee, who added that although she’s aware that bush meat trade is illegal, she has no other means of survival.

According to Action Aid regional program Manager for River Gee and Grand Gedeh Counties, James Pewee, the items donated are to be used to care for people who contracted COVID-19 and are undergoing treatment and others who in quarantine.

The county has recorded four confirmed COVID-19 cases with one person having recovered while 20 people are currently in quarantine, according to Dr. Augustine Fannieh, the County Health Officer.

Meanwhile, Dr. Fannieh has thanked Action Aid Liberia for the gesture and promised that the items will be used for people they are intended for.

Dr. Fannieh then called on partners and well-meaning people of the county to continue their support to the county health team, adding that there are many challenges the CHT is encountering that require the intervention of the public. 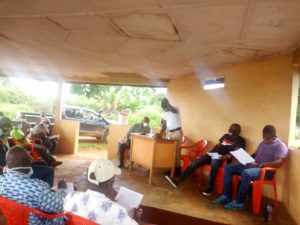 During the meeting, while the community leader is worried about mining activities that are destroying certain species of trees that are valuable to logging company operating in the area, a local miner has argued that they were operating before the company signed its logging agreement with the community | Photo By: Henry Gboluma, Jr.

The Chief Officer of Korninga Community Forest Management Body, Aaron Mulbah, has reported that a miner is destroying valuable log species worth thousands of dollars through mining activities in the forest.

Mulbah made the disclosure on August 5 during a one-day dialogue organized by local authorities of the county, which was attended by key stakeholders of the forest sector.

“Our investor has complained about the ongoing destruction of valuable logs and want to disengage the partnership if [with the community] we do no put end to it,” said Mulbah, adding “this is why we have reported the matter for redress.”

Ben Morris, one of the miners accused of destroying the species of trees, argued that they were doing mining in the forest before it was given out to investor.

“Now that we have listened to both parties, let me ask you people to give me little time to consult FDA and the Ministry of Mines. if possible, I will call them here to help us resolve this matter,” said Saah.

Superintendent Walker describes the ferry accident as ‘sad’ for the county | Photo By: Emmanuel Mafelah

Superintendent Esther Walker has expressed sadness over the recent accident of the locally made ferry in Barmie Town, District #2 where three persons were confirmed dead and six others are still reported missing.

The Barmie Town resident told journalists that the ferry capsized in the early hours of Monday, August 2.

Some residents of the community told LocalVoicesLiberia that the ferry capsized when the rope they were using to pull it towards the riverbank cut.

Madam Walker said the incident is “sadness for people of Barmie town and Bong county at large,” adding that the county administration is doing everything to help find the missing people.

Community leaders are continuing the search for the five remaining missing people, who are believed to have drowned as the result of the Monday accident.

The local leaders of the town have also expressed sadness over the incident and said this was the worst incident in the history of the town.

Since last Monday’s incident, Police in the county have promised to work alongside the community to locate the missing people and restore calm.

Mary’s Meal, Plan International Liberia and USAID SAFE Project have received commendation from the administrator of the Liberia Government Hospital in Bomi County for providing logistics to the hospital since the beginning of the COVID-19 pandemic in the country.

Joseph Kenneh said “These organizations efforts have contributed immensely to our work in most, especially, taking care of COVID-19 patients.

Meanwhile, Kenneh called for assistance to help recondition the hospital vehicles. According to him, at moment the hospital has only two functional vehicles, he said poses challenge for the county’s referral hospital.

“We are thankful to our partners, but we have challenge with mobility. As it is now, LGH has only two vehicles working and the rest are down, so we need assistance in this area to recondition them,” he said.