Around The Country: Updates From Five Counties – August 11, 2020 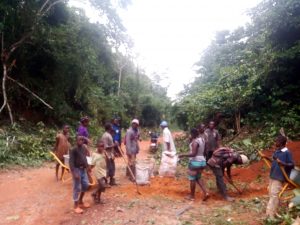 Residents of the town are calling for help as they use manual tolls to repair the the damaged road | Photo By: Henry Gboluma, Jr.

Residents of Underwear Town located along the Bopolu-Tubmanburg highway are calling on the government and humanitarian organizations to assist them with tools to enhance their road maintenance works.

Residents of the town, which is about an hour drive away from Bopolu city, continue to face serious challenge with the bad road condition which is being worsen because of the rainy season.

They are now rehabilitating the road with their hands, hoping that it will ease the constraints commuters go through.

Lanford Dahn, a community leader, said the town decided to help itself to deal with the road condition.

“We had a meeting and charged ourselves L$50 to support ourselves on this road,” he said. “We will not continue to wait for the government. So, we are brushing and opening drainages on this road”.

While calling for support from others, Dahn added:  “only our Ma, Botoe Kanneh, gave us rice on this road [while we were working]. So, we want our lawmakers and other big, big people to help us with this road works.”

The road is the major route that connects Tubmanburg and Bopolu cities in western Liberia but becomes difficult to ply during the height of the rainy season. The situation often causes increase in transportation cost for people and commodities. 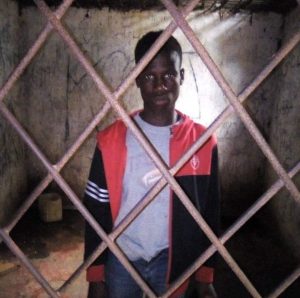 19-year-old Abraham Massaquoi, who was arrested on Monday , is the only suspect under police investigation as report suggests that all the other alleged perpetrators of four other rape incident have absconded | Photo By: Jenneh Kemokai

Police in Grand Cape Mount County are investigation a 19-year-old man for allegedly raping an 8-year-old girl in Bangrma Town. The girl has been transferred to the Redemption Hospital in Monrovia for treatment.

Abraham Massaquoi was arrested on Monday after he was suspected of committing the act.

There have been an increased in rape cases in the last two months with the August 10 incident making it the fifth case recorded so far.

Unlike the August 10 alleged rape, which is being investigated by the police, all the other perpetrators are said to be on the run. There are also concerns that most of the alleged cases are being compromised by families of the victims leaving gender rights activists to suggest that it is responsible for the increased in the number of rape cases.

Internal Affairs Minister (middle) has assured that he will lobby for the rehabilitation of the county’s administrative building | Photo By: Arthur Kowah

Internal Affairs Minister Varney Sirleaf has concluded a one-day assessment tour of the Lofa County Administrative Building which was deroofed by a heavy storm in June this year.

During his assessment on August 10, Min. Sirleaf assured the county authorities that “as your representative in national government, I will make sure that this problem is solved”.

The Lofa County Administrative building got deroofed on June 10, 2020, forcing several local officials of the county to work from their respective homes.

The county superintendent has since been lobbying with national government and partners to repair the building.

Superintendent Kamba informed citizens during a recent press conference that “plans were underway to have the building reroofed”.

“I don’t want to say it yet until it happens, but UNDP has given us a great signal that they will help us,” Sup Kamba said.

The County Health Team has recorded three additional confirmed ases of Covid-19 including 10 high risk contacts – people who came in closed contact with the infected persons.

According to Dr. Varmuyan A. Kromah, medical director and case management pillar lead of COVID-19 at the Martha Tubman Memorial and Referral hospital in Zwedru, the three patients were tested positive through a compulsory testing of staff at an international organization operating in the county.

Dr. Kromah said the patients are two males and one female – who are aged 41 and 57, respectively.

He said the 10 high-risk contacts are family members of both patients, who have been placed at the county’s precautionary observation center for monitoring, while the three patients are at the treatment unit outside Zwedru.

Meanwhile, the CHT released 20 people from the quarantine center during the weekend. Those discharged were high risk contacts of the index case recorded on July 19.

Grand Gedeh County has a total of seven confirmed COVID-19 cases with six active. one recovery and no death. 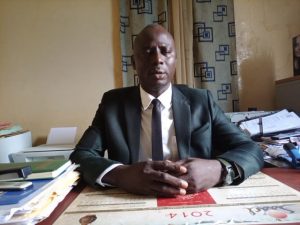 Mr. Glay is worried that the lack of support to the county’s COVID-19 task force will obstruct its work | Phot By: Elton Wrionbee Tiah

The chairman of the county’s COVID-19 task force says they might not be fully functional due to the lack of financial support.

Mr. Flee A. Glay told reporters on Monday that the committee held talks with the County Legislative Caucus during the recently held County Sitting to ensure the allocation of money for the committee to work but the Caucus refused.

“I Want to be very clear here, I am the Development Superintendent of Grand Bassa County and also the Chairman of the COVID-19 task force, but our offices were never recognized during the county Development sitting,” Glay said.

“We went in the ears of our lawmakers to let them know that the development office had no voice in the sitting due to the budget law, but they just couldn’t listen.”

Glay warned that the task force might not be proactive due to the lack of funding. As of August 10, the county has recorded 46 confirmed cases, eight recoveries and no death, according to the National Public Health Institute of Liberia.