Around The Country: Updates From Three Counties – August 12, 2020 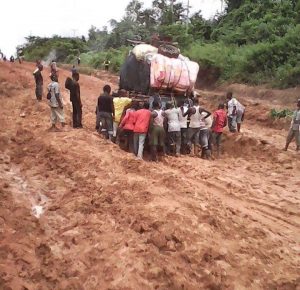 Bad roads condition in the Southeast has created hardship for many people in the region | Photo By: Ben T. C Brooks

Wilfred Sammy Ghanyea, Founder and Executive Director of  Wilfred Sammy Ghanyea Goodwill Foundation based in the United States has proposed to people of Grand Gedeh County back home to set up a technical committee to support the government to access the cost for the pavement of the Tappita-Zwedru high way.

Mr. Ghanyea said once the assessment is done, people of the county should contribute for the pavement of the Tappita-Zwedru corridor.

“In the 70’s and early 80’s, our parents did it before; they contributed to the construction of the Tubman Palace in Zwedru and the road that is in Zwedru, so we can do it too, Mr. Ghanyea said.

“Not every development that will happen we look up to national government; the government herself is struggling too, no enough funding to address some of these national concerns, so we must help to relief our people from suffering mostly during the raining season.”

Meanwhile, the Foundation has vowed to make more contributions toward the project if the idea will be accepted by the people of the county, Ghanyea said.

The Tapita-Zwedru highway is now in deplorable condition as the rainy season continues, leaving many vehicles stuck in the mud while travelers are made stranded.

However, in this current period, vehicles are finding it difficult plying the road due to bad spots, especially between Tappita-Gannta highway. Motorbikes are the only alternatives for commuters, but one must pay L$4,000 from Zwedru to Ganta.

Due to the bad road condition is posing serious economic hardship on locals in southeastern Liberia as prices continue to go high. 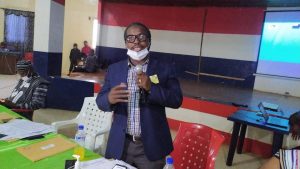 Representative Willie says the closure of the LAC Hospital puts over 60,000 residents at risk | Photo By: Elton Wrionbee Tiah

As cases of COVID-19 continue to increase in the county, Rep. Vincent Willie of Electoral District Four says the closure of the Liberian Agricultural Company’s hospital is a setback for his constituents, who rely on the hospital for basic medical services.

The hospital, which is a major health facility in the district, was closed after 17 health workers were tested positive for COVID-19, leaving the over 60,000 persons without effective medical care.

The other six health facilities in the district lack adequate to provide adequate medical care and deal with critical cases.

“We have been heavily hit by COVID-19 in Wee District,” Rep. Willie said. “This means, if anybody were to fall down in the district, there will be no way to take them to the nearer hospital, which is the LAC hospital.”

He continued: “It means our entire health system in the district is broken down because we don’t have an equipped system at the Gorblee Health Center. So, I would like us to move swiftly and we must act now while we are looking into the national budget to see how best we can place something there.”

Willie said provision of drugs and medical supplies should be treated as an emergency at this stage because lives would be at risk.

The district is the second most populated in the county and borders Nimba, Bong, and River Cess.

“The road condition is not too good,” Willie observed. “Pregnant women and children could suffer from this a lot because you have to bring them from the rural parts of the district to the compound and later to Buchanan, which is a long distance. Different things could happen along the way – we need to act now.”

Grand Bassa County only has two ambulances — one of which is used exclusively for suspected COVID-19 cases. 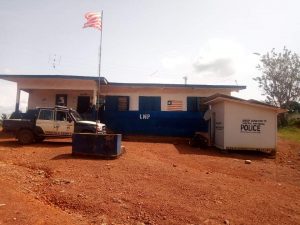 Police in Gbarpolu County, on August 8, arrested, investigated and place behind bars Belle Varmah, 15, for “injuring and attempting to rape” a three-year-old girl child.

The victim is currently at the Chief Jallah Lone hospital undergoing treat for wounds inflected on her private part.

The accused, who admitted injuring the girl in other to accomplish his sexual desire, said he met the victim at the hand pump in Mamadee Village, a Mile away from Bopolu City.

He told the Police that when he noticed that the two of them were alone, he collected the victim and put her on his lap, forcing his penis into her vagina to have sex but he was unsuccessful.

He was later arrested and is in police custody undergoing investigation.