Around The Country: Updates From Four Counties – August 13, 2020 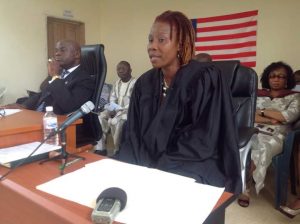 Judge Sammy has called on community members to report people, who compromised rape and other domestic violence, to the police

The judge of the 10th Judicial Circuit Court in Lofa County has called on parents and guardians to take the issue of rape seriousl, stressing that rape and other forms of domestic violence continue to be the most perpetrated crimes she has adjudicated in recent months.

Judge Nancy Finda Sammy, appearing on the Voice of Lofa Radio in Voinjama, said her appearance on the local radio was necessitated by the surge in rape and domestic violence cases at her assigned court.

“This rape issue is very serious, and everyone must get involved to stop it and that’s why I’m here today”, she said.

Judge Sammy added that although it is not an excuse for rape, parents and guardians are contributing to the menace against women and children by the way they leave them vulnerable in their communities.

She said the issue of rape usually occurs in the homes with most perpetrators being closed family relatives as compared to those that are outsiders.

“I spent vacation in my home recently when the court was closed. What I saw there is very scaring. You know during the farming season those parents were leaving their children with other kids in the community. I even called a community meeting and advised them that what they were doing was completely wrong,” the judge said.

Meanwhile, she has called on community members to report people, who compromised rape and other domestic violence, to the police.

“Aiding and abetting is a crime under our law; if you see a child raped in your community and the parents don’t report it to the police, you as a responsible citizen should tell the police”, she said, while warning parents who allow their children to wear flashy clothes and mini skirt to stop.

At the same time, Judge Sammy also said child marriage as one of the commonly perpetrated crimes that families take lightly.

“One thing I’ve seen people take light is the issue of child marriage. I recently adjudicated a serious case like that from Quardu Gboni District. This man went and told this family that he wanted their daughter. The parents told him that she was underage. But they accept him in the home and he started making farms for them.” 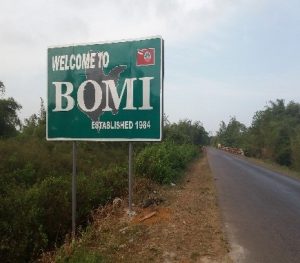 Bomi-Monrovia Highway is becoming very deplorable and with the rainy season in its peak, there are concerns the road may  further worsen

Superintendent Adama Robinson of Bomi County has announced the commencement of a major rehabilitation work on the Bomi-Monrovia Highway. The work was expected to start on Wednesday August 12.

The work, according to the Bomi County superintendent, will be done by Bea Mountain Mining Company which operates in Kinjor, Gola Konneh District. The company is expected to use cement concrete to repair potholes on the road.

“We have good news for the people of Bomi County, the Bea Mountain Mining Company has agreed to begin fixing the road on Wednesday,” said Adama Robinson.

He added that the current bad condition of the Bomi-Monrovia highway is making movement difficult for people commuting from Monrovia to Bomi or from Grand Cape to Monrovia.

“That road has been an embarrassment for our people who are moving between Monrovia and Bomi and Monrovia to Cape Mount causing difficulties in their movement,” he said, adding that  when the rehabilitation of the road is completed, it will not only ease movement but also bring relief to traders.

Registration for national citizen identification card has dropped significantly in Grand Gedeh County, with the County Registrar saying it is due to the outbreak of the coronavirus.

According to Alphonso Zebaye, the process has dropped momentum, considering that his office used to process up to 25 requests a day but since the outbreak, “people are showing less interest in obtaining the national ID.”

Zebaye said since the registration started in October 2018 in the county, the office in the county has raised over a million Liberian dollars put into government revenue.

“The cost of the national identification card is US$5.00 or its equipment’s and you must be a Liberian ranging from aged six then you can obtain the card, but from the day we started we are yet to register a child only adults,” he told LocalVoicesLiberia.

“We have registered most of the government employees that are mainly assigned in Zwedru but find it difficult with those assigned in the districts, like the chiefs, commissioners, teachers, and traditional midwives.

Meanwhile, Zebaye has called on Liberians in the county to take advantage of the process, adding that ID card is important for Liberians who often travel to neighboring countries for business purposes. 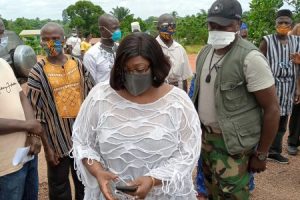 VP Taylor has been flown to Ghana where she will receive treatment | Photo By: Emmanuel Mafelah

Barely 24 hours after it was announced that Liberia’s Vice President Jewel Howard Taylor tested positive for COVID-19, people of Bong County are worried about the health of their daughter.

The residents, many of whom are women, told LocalVoicesLiberia Wednesday, August 12 that they are praying for Madam Taylor to speedily recover and hope that she returns to the country very soon.

“The information is saddened, but I wish our daughter a speedy recovery and that our God in heaven can hear our cries and heal Jewel. Jewel is a blessing to Bong County and Liberia at large,” Mother Nancy G. Dolo told reporters in Gbarnga.

County Superintendent Esther Y. Walker also expressed disappointment over the news of the Vice President’s illness and said she is praying that the former Bong County Senator regains her health.

For Dorothy K. Toomann, former Executive Director for the Development Education Network Liberia (DEN-L), she is “praying for God’s healing mercies for our Vice President, get well soon, Sister Jewel”.

Also, Bong County District #6 Representative Moima Briggs Mensah added: “Get well Vice President Taylor, we have a lot to do for our people. COVID-19 is not your friend”.

For his part, Sam Elliott, President of the Bong County Motorcycle Union, is optimistic that the Vice President Taylor will overcome COVID-19”.

On Tuesday, the Office of the Vice President announced that she was flown out of the country to seek additional medical care at a specialist hospital in Accra, Ghana.

According to a Press Release, VP Howard-Taylor was earlier admitted at the Aspen Medical Facility, in Sinkor, Monrovia, on Friday August 7, 2020, due to respiratory complications. The Ministry of Health, in a memo, stated that the VP was tested positive for COVID-19.

Having favorably responded to treatment and the state of her health stabilized, it was advised that the Vice President seeks further medical attention at a more advanced facility with specialty in the diagnosis and treatment of respiratory ailments.