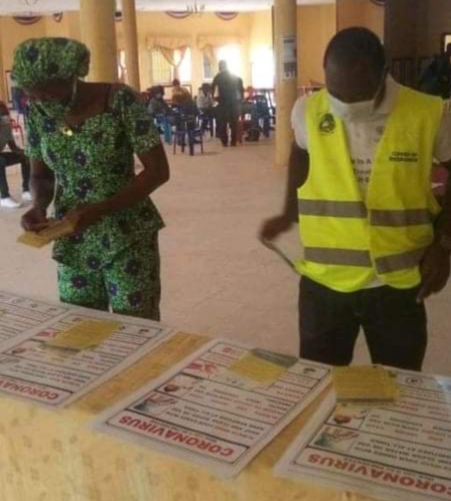 Zwedru – The County Health Officer of Grand Gedeh County, Dr. Augustine Fannieh has started a massive health orientation for all faculties and administrators of schools in the county, following the announcement by the Ministry of Education that schools will soon be reopening across the country.

Dr. Fannieh said the orientation is intended to adequately prepare schools so that they can fully adhere to COVID-19 health protocols. He added that the orientation will widen the knowledge of teachers and administrators about the basic health guidelines.

“We are certain that the orientation is key and vital at this point of the learning process for our kids and those that are imparting knowledge in them. We can’t afford to leave them vulnerable,” he said.

He disclosed that effective procedures for physical distancing, wearing of face or nose masks and washing of hands are being taught to faculty members of schools in the county.

“We … know that instructors are not doctors or nurses; [but] they too need to get the basic understanding about the virus. There are too many myths and misconceptions that we must clarify. So, this orientation is important,” Dr. Fannieh told a cross section of schools administrators at the Zwedru City Hall in Zwedru City Grand, Gedeh County.

All senior and junior high schools in the county are participating in the orientation as they prepare for the West African regional exams, which start August 17.

Speaking to LocalVoicesLiberia via telephone, Dr. Fannieh said the exercise is expected to last for a week to meet up to the deadline of the resumption of regular classes, which is expected to begin on August 22.

He stated that the CHT had intended to meet all schools in the county separately, but was unable to do so, due to the lack of resources to empower health workers to train staff from all schools.

“We had initially thought of meeting up with each school, but you know we are heavily challenged in terms of resources and mobility. So, it makes us incapacitated to venture in such. Our only option is to have all schools concerned coming in to Zwedru, were we will [train staff from] four schools per session,” explained Dr Fannieh.

The plans for the reopening come as the government eases COVID-19 restrictions. Now that government has set August as the deadline for the reopening of schools for certain levels, all schools have been mandated to follow health protocols instituted by the Ministry of Health and the National Public Health Institute of Liberia.

Dr. Fannieh noted that students and school faculties have been extremely cooperative and receptive in listening to various topics on COVID-19 preventive measures.

Grand Gedeh County has recorded a relative low number of confirmed cases since the outbreak in Liberia started back in March this year. As of August 18, there have been seven confirmed cases in the county, and three recoveries. The county has not recorded any new case for the past two weeks.

The CHO said the “success” is being attributed to the cooperative posture and resilience of the people of the county.

“This is a gradual success story that I can’t say is my doing. It is the holistic efforts of every one of us including local leaders in the county,” Dr Fannieh said, lauding school administrators, whom he described as stakeholders, for leading the response efforts in the county.

Some of the school administrators attending the orientation said the exercise is rewarding, assuring that students will be made to fully comply with the health protocols when school resumes.

“It was insightful for our safety and the safety of our students and instructional staffs,” said Regina Walpoe, Dean of Student Affairs at the Toe Town Junior High School. “We shall go back to implement what we have been taught here.”

At the same time, students in the county have expressed delight in the exercise. However, they are calling for additional activities that will focus on sensitizing students, as well as their teachers.

“We welcome the health team’s initiative but we … wish they would do something separately for our students, where we will be directly oriented,” Zarwee suggested.

Larry Solo, a senior student of the Bishop Juwle High School, thanked the County Health Team for conducting the health orientation for school administrators and faculties ahead of the reopening of school, but he said those attending the exercise must also conduct similar orientation at their respective schools so that students can learn how to follow the health protocol.

“For me, I think that’s the major essence of the session. They get the knowledge and they come back and teach us too,” he said.