Around The Country: Updates From Four Counties – August 20, 2020

The patiently escaped from the treatment center on Monday, August 17 | Photo By: Eric Opa Doue

A patient, who tested positive for COVID-19 in the county, on Monday, August 17 escaped from the treatment center following reported tension from his family members and residents of his community.

The patient and two others tested positive for COVID-19 in late July. He was taken to the treatment center in Cestos while the other two, who were already in Monrovia when their results were released from the reference lab, were taken to the 14 Military Hospital in Margibi County.

But the relatives of the patient, who was taken to the treatment center in the county, stormed the treatment facility, demanding his immediate release two hours following the discharged of the other patients after two tests showed that they had recovered.

County Health Officer Dr. Joseph Topor blamed the father of the patient, who is an employee of the health sector, for allegedly instigating the tension.

The patient’s father later told LocalVoicesLiberia that his “son was not being treated fairly by the county health team”.

According to him, when the test results arrived in the county, the health team did not inform his son but rather speculated the information before informing the patient’s family.

Currently, the whereabouts of the patient is unknown. 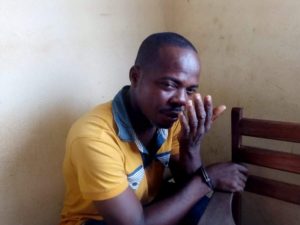 The defendant, 38-year-old Daniel Toe, is known to be a popular businessman in Pleebo City, Maryland County | Phot By: Bryan Dioh

Daniel Toe, 38, has been arrested and forwarded to the Fourth Judiciary Circuit Court in Harper for alleged Rape.

On August 8, the parents of the victim reported to the incident to the Liberia National Police’s Women and Children Protection Section in Pleebo, alleging that their 11-year-old daughter was allegedly rape by Daniel.

“Our daughter came crying to us that she was forced by one Daniel Toe and we could not sit down because she is still small, not because she has big body so they should see her to be big,” the Mother of the Victim told reporters in the county.

The victim was immediately rushed to the Pleebo Health Center for examination and doctors confirmed that the girl was tempered with.

The victim later told LocalVoicesLiberia that she was raped by Daniel when she went to visit a friend, who is a relative of the suspect.

“I went to visit my friend  on Saturday morning when this man, who I do not even know, asked my friend to cook for him and because I went to visit, I followed her to the market. We bought the food and came home,” she explains.

“We cooked and ate; so, while I was about to go home, Daniel, as they called him, called me in his room and told me he wanted to have sex with me but I said no. So, while I was running because there was cement at the door I felt down and he jumped on me, put his bed sheet in my mouth and had sex with me.

“After my friend pushed the door and open it, he told me that if I tell anyone I will die and he will go to jail.”

Meanwhile, Toe has denied the allegation, claiming he does not remember “ever seeing” the victim. “I don’t even know her, but I can’t talk much only God will judge us,” he added.

After spending a night in police custody, Toe was forwarded to the Pleebo Magistral Court. Pleebo Magisterial Court authorities have informed LocalVoicesLiberia that the case is beyond its jurisdiction and has, therefore, forwarded same to the Circuit Court in Harper. 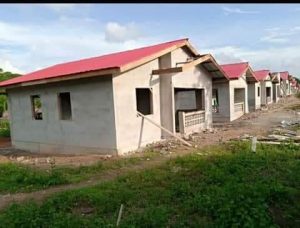 Residents say the completion of the housing units will impact several families in the county | Photo By: Ben T. C Brooks

Ahead of the completion of 20 housing units in three communities of Grand Gedeh County, residents have praised President George M. Weah for the ongoing project.

Residents of Kpelleh village in B’hai district, Duzon junction in Cavalla and Gbarboe Town in Tchine District citizens will benefit from the government’s pro-poor housing units.

Speaking to LocalVoicesLiberia, the Town Chief of Gbarboe Town, Junior Grear said the project came as a surprise and when completed it will impact the lives of families who will benefit from it.

“Since we came from exile, it is this President that [is]going to make me to be living under decent apartment, because I don’t have the hand to build good house for myself, I am depending on farming to survive,” said Grear.

“We suffer a lot when it’s rainy season,” she said.  “We are living on sandy ground and in thatch houses again, so when the rain is falling, we experience flow of water in our houses and at the same time leakages.

“This housing units will help us to secure at least one or two apartments for passengers to keep their goods and help them sleep in case this particular part of the national road will spoil again like last year which we are not praying for it to happen”.

Continued Ma Sarah: “During last year raining season, passengers’ goods and cars spoiled in Grand Gedeh’s Kpelleh village and because we never had good area to store their goods and for them to even sleep, it was difficult for us to aid them but with the completion of these apartments by the Government, we will provide help if the time comes”. 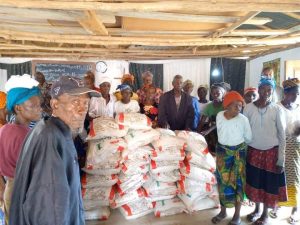 Tonofakiah, a group of agriculturists, has identified with old folks in Balamah town, Suakoko District, donating 100 bags of rice to the community.

The group says the funds to procure the rice was provided by its partners, TeamWork Africa, and the New Beginning Church of the United States of America

Tonofakiah’s Bong County Coordinator, Daniel Bondo, said the gesture is the partners’ “way of identifying with the old people during the current economic situation made worse by the global pandemic”.

Beneficiaries extended commendations to the donors for remembering them during the health crisis and then appealed to others humanitarian organizations to come to their aid.

Mother Gormah Flomo, 64, said she was grateful to the agriculture-based group and its partners for putting smiles on their faces.