Around The Country: Updates From Five Counties – August 26, 2020 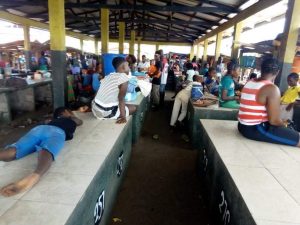 Several marketers in the county have vowed not to vote in the upcoming senatorial elections “if the price for a bag of rice does not come down”.

The price of a 25kg bag of rice has increased from L$4,700 and L$5,000 due to several conditions rice importers in the county say they are experiencing. They claim that the bad roads in the Southeastern part of Liberia makes transporting goods to the region very difficult and expensive.

But Servina Wion, a local rice dealer, said it is worrisome to see the price of the country’s staple increasing constraining retailers, who sell from hand-to-mouth, to struggle to keep their business afloat.

Marthaline Weah, another rice retailer, said the government must enact laws to mitigate the problem by investing in home-grown rice. “See, we have lawmakers in our County and Country who can’t even show us their farm, but after every six or nine years they will come and want us to vote them again,” she said. “Why you think these rice importers within the county or country will not be hiking prices every day?”

She lamented that it is difficult to purchase a 25Kg bag of rice for L$5000 accrued profits after sale. Several other marketers called on politicians seeking election to make available rice to help reduce the price on the local market.

Meanwhile, Market Superintendent Paul Nimpson said although it is worrisome to see marketers complaining about the increase in the price of rice, they should remain calm. He also called on the government to intervene.

Anthony Bedell, the County Fiscal Affairs Superintendent, recently told rice importers in the county to sell a 25 kg bag of rice at US$18 or L$3,600. But importers have not heed to Bedell’s call. 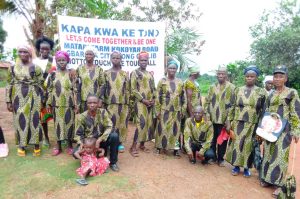 Over 100 local farmers are expected to benefit from the organisation’s initiative | Photo By: Emmanuel Mafelah

A prominent son of the county has called on the government to invest more in agriculture, stressing the need to empower young people in rural communities who are engaged in farming.

Lamandan Yarkpawolo made the assertion on August 24 when he served as the keynote speaker at the official launch of a new agriculture organization, Kapakwaketonor.

“Agriculture has to be one of the central points that Liberians should focus on; it is not all about government, it requires collective effort,” he said, adding that every community should “go back to the soil”.

He then lauded Mr. Kwata D. Suah, the CEO of the Kapakwaketonor, for his vision as a young man, stressing the importance of other youths to join the initiative and help boost food production in the county.

Giving an overview of the organization, Mr. Suah, said the group, which was established in March this year, seeks to encourage young and older people to go back to the soil to enhance food security.

Suah is optimistic that the organization will contribute to maximizing income of farmers by helping them graduate from “just hand-to-mouth” farming to “acquiring physical and financial assets, family healthcare, children’s education and building shelters”.

The group involves in the production of rice, vegetables, cassava, beans, and among others. He also called on the government, humanitarian organizations and well-meaning Liberians to support their organization fight hunger.

The women network has also been distributing mask to senior students taking this year’s regional exams | Photo By: Regina Juwle

The Southeastern Women Network of Liberia is partnering with the County Health Team to distribute locally made face masks to several learning institutions and students taking the West Africa Senior Secondary School Certificate Examination in the county.

Grace Nyenneh, a member of the network, disclosed that the gesture is the organization’s way of buttressing the government’s response against the pandemic which includes making learning environments safe for students.

“The nose mask we’re distributing to you the student is for you to always wear it while on campus or in public gathering to prevent you from getting this virus,” she said. “Don’t keep it in your book bag, wear it and always wash it whenever the nose mask is dirty or when you used it for two times.”

Gibson Blamo, the Acting Principal of the Joseph Blamo Toe public school, thanked the women and assured that the school administration will enforce adherence to the use of mask by the students.

“We will take serious action against violators on campus, because coronavirus is everybody’s business and by wearing the nose mask will help prevent students from contracting the virus,” he said.

A student at the Barclayvillve Central  High School Boyjeh Nyemah said: “We the students will use this nose mask anytime we are on campus or in public area”.

The Ministry of Health and the National Public Health Institute of Liberia have stressed the wearing of face covering in public as a means of curbing the spread of COVID-19. 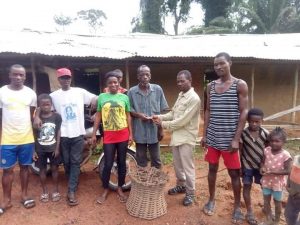 Teachers, receiving compensation from a US-based foundation, stand in front of the school buildings, which is in deplorable condition. | Photo By: Ben T.C. Brooks

Two School administrators of Ploe in Gbarzon Statutory District have called for better learning environment for students in the area.

Johzon and Bodee elementary school principals said students find it difficult to complete elementary requirements due to the dilapidated condition of the school building and the lack of adequate instructional materials.

Speaking to LocalVoicesLiberia, Mr. Joseph Quenwon of Johzon Elementary School said some students either drop from school or their parents take them away from the school because of the unconducive learning condition.

He said the buildings were constructed by the community but remain incomplete because of lack of funding. The buildings, which were made out of sticks and mud, are gradually crumbling. Each of the school has over 100 students, who have to sit on broken chairs made from bamboo sticks.

For her part, Bodee elementary school Vice principal, Madam Nora S. Gaye, said: “Sometimes, we the teachers can go out of teaching materials like lesson book, geometry set for kinds, and chalks”.

“So, we need the intervention from our own education ministry to really make things possible for us this coming school year. So that our children can learn better”.

She said several engagements with the district education officer have yield no result. The two teachers were speaking after receiving financial assistance from the executive director of Ma Tchienyonnoh Foundation, Mr. K.Z. Emmanuel Poure, who is based in the United States. Each of the teacher received the amount of LD$10,000 “to complement their good work within the district.”

A day-long awareness meeting on Sexual Gender-Based Violence (SGBV) facilitated by the Episcopal Church of Liberia Relief Development or ECLRD was held in Cestos City on Tuesday, August 25.

Solomon Morris, the coordinator of ECLRD in the county, said the purpose of the meeting was to get the communities involved in raising alarm about any form of SGBV in their respective communities.

Isaac B. Williams, River Cess’ County Information Officer, represented the office of the Superintendent and called on local chiefs to desist from compromising rape and other sexual abuse cases.