Around The Country: Updates From Five Counties – August 27, 2020

Some of the students claimed they had borrowed money from relatives or friends after hearing about the stipend but the delay is now causing embarrassment for them | Photo By: Bryan Dioh

Several 12 graders in Maryland County have expressed dissatisfaction over the delay in receiving stipend provided by USAID Liberia. The stipend was to be transferred to the students via mobile money by another organization contracted by USAID.

The cash assistance project intends to help students with feeding, transportation and other basic things as they take the ongoing West African Senior School Certificate exams.

The students said some of them credited money from friends or relatives upon hearing about the stipend, but the delay is now making their creditors impatient.

Daniel Gezay, a student at the St. Stephen High School in Pleebo, said he sent his information two weeks ago, but he’s yet to get the cash.

“Can you imagine my brother since I registered for our Stipend, they are refusing to give it to us. This is bad,” Gezay told LocalVoicesLiberia Wednesday.

Another Student, Catherine Blade of the Central Site High School, said the delay is causing “serious embarrassment” for her.

“Even though we were not depending on the money, but we think it was a great help and I don’t know why up to now our money is not coming,” she said. “I don’t know if we will blame the government or who, but I think USAID play their part in helping us.”

Julius Jule Toe of the Christ the King institute in Harper is also disappointed. He said, “For me, I don’t have any means of getting a cent since we started this entire test and sometimes my friends are contributing other things but no way at all for me. So, I was excited when I heard about the Stipend but up to now nothing is coming.” 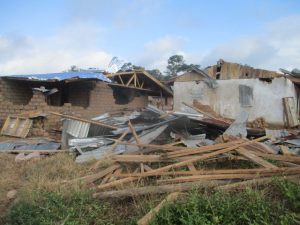 Over 20 families were made homeless when a rainstorm destroyed their homes | Photo By: Regina Juwle

Over 20 storm victims have benefited financial assistance to recondition their homes. The support was given by Representative Jonathan Fonati Koffa of District #2.

Delivering the cash to the families in Barclayville, the lawmaker encouraged the victims to be strong as they go through their “struggling time”.

The beneficiaries described the gesture as timely and thanked the lawmaker for coming to their aid. They, however, called on other humanitarian organizations and lawmakers to provide further assistance.

The protesters paraded the main streets of Buchanan and later petitioned the legislative caucus | Photo By: Elton Tiah

As the number of reported rape cases sparks public outrage in the country with protest taking place in Monrovia, residents of Grand Bassa County have also joined the protest.

Many young people turned out on Wednesday in Buchanan to petition the county administration and the Legislative caucus to join the fight. Dressed up in dominant black, the protesters paraded the principle streets of Buchanan for over four hours carrying anti-rape placards.

Speaking on behalf of the protesters, Linda Lloyd, said: “Today, we are jointly assembled here not as politicians, but as human rights Activists, void of political influence, to speak the minds and sorrows of children and women who are sexually abused everyday under the Administration of President George Manneh Weah and before the watchful eyes of the lawmakers”.

She furthered: “As it stands, the Gender Ministry Statistics has disclosed 960 cases of rape across the nation within the period of eight Months. Reasons for which all stakeholders and citizens must rise up and find urgent solution Now!”.

Representative Thomas Goshua, Chairman of the County Legislative Caucus, accepted the petition, promising to work with his colleagues to ensure that rapists are brought to justice. 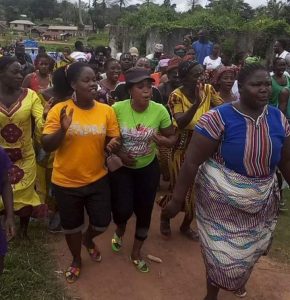 Many people attending political rallies in the county often ignore all the COVID-19 health protocols | Photo By: Ben Brooks

Ahead of the December 8 senatorial elections with political rallies being held frequently, the county health team (CHT) has urged people to follow the COVID-19 preventive measures.

The CHT, in a statement, said it has observed that most politicians campaigning in the county and their supporters are not following the health protocols.

The County Surveillance officer, Sylvester Toe, warned that people who gathered at these political events are not practicing social distancing or wearing nose masks.

Toe said while it is proven that cases of COVID-19 are declining daily in the county, following the health protocols will keep the curve flattened.

He disclosed that there have been some specimen of people sent to the National Reference Laboratory, but the results are still unknown.

Senator Jim Tornonlah and the Strategic Emerging Leaders have ended a two-day training for community leaders in Kakata.

According to Senator Tornonlah, the leadership training is meant to identify the “hidden leadership trait” in young people, adding that this will help them provide responsible leadership at the community level.

Senator Tornonlah said the sooner young people identified their leadership trait and ability, the “more responsible servant leader they will become” and will lead to a better society.