Around The Country: Updates From Seven Counties – September 1, 2020 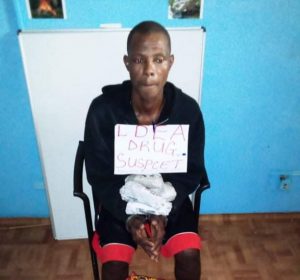 Tarpeh, who was arraigned before the Harper Magisterial Court, admitted to the crime and pleaded for mercy | Photo By: Bryan Dioh

The Harper Magisterial Court has sentenced Nelson Tarpeh, 47, to 18 months jail after he admitted to transporting and selling illegal substance in New Kru Town, Harper City. Tarpeh was arrested with 50 Kilograms of Marijuana worth over L$31,000, the Liberia Drug Enforcement Agency said.

Tarpeh, appearing before Magistrate Dweh Morgan, pleaded for mercy after admitting that he has been selling contraband for 10 years.

“I begged the Court to please let me go because I have sold this for over 10 years now and from the selling, all of my children are in school including feeding my family so if I am locked up who will feed my family again?” he said after the rendition of the magistrate’s judgement against him.

“I think if they let me go the little money I have I will get into different business for my family and I to live rather than locking me up even though I know it is my doing”. 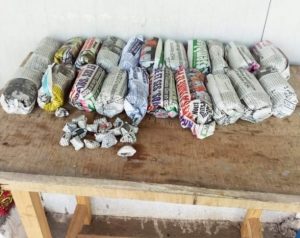 According to the LDEA, the drugs arrested was 50 Kilograms of Marijuana worth at over L$31,000 | Photo By: Bryan Dioh

For his part, Maryland County’s Liberia Drugs Enforcement Commander Joseph Tageddine said the sentencing of drugs sellers and users will serve as a deterrent to others who are engaged in similar act.

Tageddine said Tarpeh was arrested after they launched an operation on the early morning of August 20 aimed at tracking down drugs users and dealers in the county.

“We lunched the operations to get those guys arrested who are constantly spoiling our peaceful citizens and thank God we caught one who is a major importer of the drugs in Maryland County,” the LDEA Commander said, while stressing the need for logistical Support to his detachment. 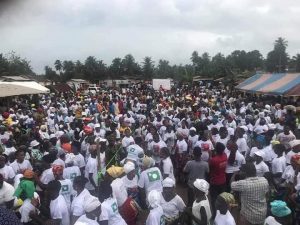 Hundreds of people turned out at the weekend to support the re-election of Senator Karnga-Lawrence | Photo By: Elton Wrionbee Tiah

The endorsement of the Liberty Party (LP) Political Leader created a huge gathering with hundreds of partisans including Former Vice President Joseph Boakai, the Political Leader of the All Liberian Party (ALP), Benoni Urey and several Stalwarts of the CPP in attendance.

Former Vice President Boakia told the crowd that the CPP will stand with Senator Kangar-Lawrence to ensure that she is re-elected, adding that the senator has proven to be one of the best due to the level of work that she has done within the Liberian Senate.

“Grand Bassa County is blessed to have Nyonblee Kangar Lawrence as their senator because I severed as president for the Liberian Senate before and I know exactly the kind of senator she is in Liberia,” he said.

For his part, Mr. Urey said the CPP is not ready to forgo a seat in the upcoming Special Senatorial elections.

Huge number of supporters made their way at the program without observing the COVID-19 health protocols. 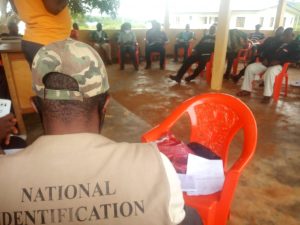 The government will place a stop-payment on the salaries of employees on the Central Government Payroll for civil servants who do not comply | Photo By: Henry Gboluma, Jr.

The National Payroll Clean-up Task Force in Gbarpolu County on August 28 completed a stakeholders’ awareness meeting in Bopolu City. The meeting brought together over 20 civil servants in the county. They were informed about the ongoing payroll clean-up exercise that started on August 13.

The head of the task force assigned in Gbarpolu said that beginning with the August pay period, the government will place a stop-payment on the salaries of employees on the Central Government Payroll for civil servants who do not comply.

“So, we are here for 30 days to help all GOL employees who have not provided national ID numbers or need to register with the National Identification Registry (NIR) to get their national ID numbers,” said Joel Richardson, who is heading the team.

He said that the stop-payment of salaries for non-compliant GOL employees is the first step of the payroll clean-up process, which will be followed by a nationwide headcount exercise headed by the Internal Audit Agency.

Richardson added: “Before that time, if you don’t have National ID card, you will not get pay. So, please work with your people in respective agency or ministry to who have problem to resolve their ID card issue.”

The protesters are demanding that the county administartion allow the herbalists to “cleanse” the community from alleged witchcraft activities | Photo By: Regina Juwle Raymonds

As Herbalist Tamba Bundo operation of cleansing Piniccess Community of witchcraft remains in hold due to the mandate of the Ministry of Internal Affairs, scores of residents of the community staged a peaceful protest on Monday.

The protesters marched for about an hour to the county Administrative Building where they called on the county administration to allow herbalist Bundo resume his “cleansing of the Picniccess community” from alleged ritualistic activities.

It can be recalled that in late July the community staged its first protest and petitioned the county administration, requesting that Herbalist Bundo should be allowed to purge their community from witchcraft activities.

Based on the approval of the county authority, Bundo was invited to the community and began his “cleansing work” on August 18. He then accused 14 persons of being part of a witchcraft cult and reportedly up rooted chants from the community.

But his operation was put on hold after the Ministry of Internal Affairs ordered him to discontinue, prompting outrage among locals.

Elder Ezekiel Wisseh, who led the protest, vowed not to part take in the upcoming special senatorial election due to the failure of the government to allow Herbalist Bundo continue his work. “We the citizens of this community, without fair justice shown to us, we will not vote during this upcoming election,” Wisseh said.

Another resident, Mary Doe claimed the community is “suffering from ritualistic happenings” and they want government to intervene.

“We are tired of these witchcraft activities; sometimes our children, men will go on the ocean to fish and found dead with parts missing from their body. We appealing to the county authority and the government to allow Tamba to work to save our community,” she explained.

Superintendent Doris Ylatun asked the protesters to remain calm and patient as she hold consultations with the legislative caucus to respond to their concern.

Justice by ordeal, which basically involves the use of mystical power to subject people to confession to a crime, has been outlawed by the Supreme Court of Liberia. 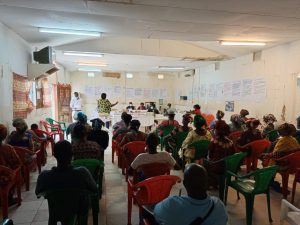 25 women were selected from Voinjama and Quardugboni districts to attend the training | Photo By: Arthur Koweh

The Food and Agriculture Organization has completed the training of 25 women in sustainable agriculture, agribusiness, and value addition. The training, which lasted four days and was facilitated by the Central Agricultural Research Institute-CARI, trained the women selected from Voinjama and Quardugboni districts.

They were trained to produce flour from locally produced rice which they can then use to diversify into variety of other products.

The closing event, held at the weekend, brought together civil society organizations, government officials and prominent citizens to grace the occasion.

Madam Deddeh Kollie, head of the civil society network of Lofa and representative of the Voinjama District Women for Peace and Development (VODWOPED), thanked FAO for organizing the training to empower the women.

“I am so amazed to see these nice products being made right here,” said Madam Kollie.

Some beneficiaries of the training thanked FAO for the opportunity provided them to acquire new skills.

“At least with this knowledge, I will be able to make rice flour, rice bread, rice cake, which I will make money from to take care of my myself and children,” said Weedor Jallah, a beneficiary of the training.

Mr. Vincent referenced an incident whereas the statutory superintendent and the county Senator Victor Watson visited the district but they were left bewailed because the “Commissioner took all of the chairs from the hall and didn’t attend the meeting as well”.

Meanwhile, Melvin Kmara, Executive Director for Platform for Dialogue, said there has been “serious leadership crisis in in that part of the county” that must be resolved before the 2020 Special Senatorial election.

There have been an increased in the number of children under five who have fallen ill since the outbreak of the coronavirus, the County health Team says | Photo By: By: S. Augustine Sokan

Mr. Benjamin F.  Kanmoh, Community Health Department Director at the County Health Team, said over the past months, there have been a noticeable increased in the number of children infected by childhood illness in the county.

Mr. Kanmoh was making the disclosure at the start of a workshop in Greenville. The Ministry of Health is partnering with the Family Health Division of the county to conduct a six-day training on integrated management of newborn child lines for health workers in the county. The training is being funded by the World Bank.

Kanmoh believes the training will serve as booster and enable health workers to quickly respond and manage illness that infect children under five years.

Basic topic to cover during the training are identifying childhood illness, causes, knowledge on referral and treatments require amongst other. Participants were drawn from 10 heath districts in Sinoe County.