Around The Country: Updates From Six Counties – September 3, 2020 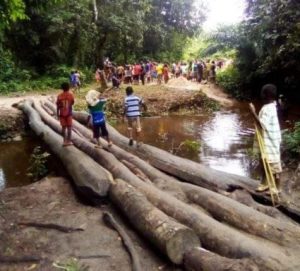 The community members say the damaged bridge is a massive hindrance to their livelihood | Photo By: Emmanuel Mafelah

Residents of Tumatai in Suakoko District have begun raising funds to construct a bridge that links several towns in their district. The project is being supported by community members. Mike Tokorlon, who heads the project, told journalists that the bridge would allow residents access the shortest route to transport their farm produce to Gbondoi and Suakoko districts.

Tokorlon said thousands of residents struggle to transport their goods to local markets. Locals in this community rely on farming and with the damaged bridge, it is imposing a massive hindrance to their livelihood.

“You know everybody from this side use this road only if they are walking, so it is, therefore, important for us to have this bridge built so that vehicles and motorcycles can use it,” he said.

Mr. Tokorlon estimated US$8,000 as the cost for the project, and he is calling on lawmakers and the Ministry of Public Works to support the project.

For his part, the general town chief of the community, Jackson Flomo, said residents are worried about the condition of the bridge and even though they have little resources, they can’t continue to be sitting on the fence but have decided to start the project.

He said the damaged bridge does not only impede business transactions, residents travelling for other purposes including seeking medical services have to use reeds to cross over the creek.

“We have already started this project through our small cash, but we are asking for more support to have this project completed,” he said.

Over the last few months, there have been growing community mobilization in the county, some embarking on self-help projects. Recently, residents of Tamatee Town in Suakoko District began rehabilitating a major road in the district after the rainy season began making the road impassible. 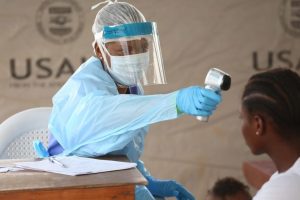 County Health Officer, Dr. Dianna Jackson Mentoe said 15 out of 18 persons, who were infected with COVID-19 in the county, have recovered. Fifteen of the 18 patients were health workers. It is not clear if all the 15 persons who recovered are the health workers.

Dr. Mentoe said only three patients are still in treatment unit awaiting their second results from Monrovia before they will be discharged.

The outbreak forced health authorities in the county to partially shut down the Nimene Maternity Hospital in Sasstown, but Dr. Mentoe recently disclosed that the hospital is now reopened to the public.

The elders, who are from the Gbao-Niao chiefdom, are backing William Gear Nyanue to contest in the upcoming Senatorial election | Photo By: Ben T. C. Brooks

A group of elders and residents of Gbao-Niao chiefdom say if the county must “truly experience development and good representations” it must elect someone with “a developmental mind, advocacy and solid education credentials”.

Reading a petition on behalf of the chiefdom, Enerstoe Kambire said since the county has been electing individuals at the Legislature, they have been poorly represented. He added that educated people who have been elected lack “developmental minds and representation”.

The elders were speaking when they petitioned Mr. William Gear Nyanue to contest the upcoming special senatorial elections. The petition ceremony was held at the weekend in Jarzon, Niao Clan and brought together cross session of citizens from the county’s three electoral districts.

Nyanue accepted the petition and promised to “deliver to the people of Grand Gedeh County when he is elected” as a senator.

He promised to lobby with lawmakers of counties in the southeast to ensure the construction of the Ganta-Zwedru highway, which is currently in a deplorable condition and poses challenges for people in that part of the country.

The condition of the road is a major impediment to the growth and development of southeastern Liberia due to its deplorable condition especially during the period of raining season, many residents say. 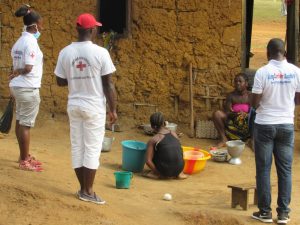 The Liberia National Red Cross has begun COVID-19 awareness outreach activities in the county, encouraging communities to follow all the preventive measures.

Speaking Wednesday, September 2 at the start of the campaign in Hand Street community, Harper, Sylvester Wesseh, who was leading the campaign, said despite the reduction in the number of confirmed cases in the county, it is more important for people to continue washing their hands, observing social distances and wearing nose marks.

“People are feeling weak about observing health protocols because the COVID-19 massages are no more active in the communities and on the radio stations, so we, the Red Cross family, thought it wise to come this morning to inform our people,” Wesseh told community members. .

Residents were appreciative for the outreach activities as Lincoln Dediar of Hnad Stree Community said: “I strongly support the idea of the Liberia National Red Cross Society coming to us this morning to remind us about the deadly virus”.

Added Sarah Wesseh, a resident of Middle Cess: “For me I stop hearing this coronavirus business long time on the radio; I thought the virus has finished from our country.”

The incident management meeting is a gathering of stakeholders where updates on COVID-19 and steps taken by health authorities and partners are discussed. According to Dr. Doedeh, the county has gone four days with empty treatment units and isolation centers.

“Today makes it four days since we discharged the last patients from the treatment units in the county,” Doedeh said, adding that the countdown will continue for 28 days, and a successful completion with a new case will means the county will be declared free of COVID-19.

Meanwhile, the CHO has cautioned people of the county to continue following the health protocols so as to avoid being infected with the virus.

“Even though this countdown is on, nobody should forget to follow the health protocols in place. We really want to achieve that milestone of being declared COVID-19 free,” he said.

Despite the optimism of having no confirmed cases in the next 28 days will mean the county is free, public health experts have always warned that there is possibility of having cases if more tests are conducted. 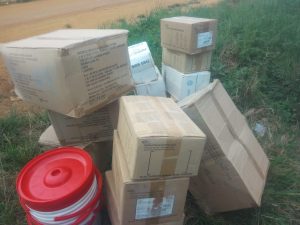 Some of the items donated to schools in Kpanyan School District | Photo By: Augustine Sokan

Marthalyn Tarpeh, a student at the Tubmanville High School, said, “We used to wash our hands without soap; some students can’t wash their hands because it’s one bucket and it can’t serve all of us”