Around The Country: Updates From Four Counties – September 4, 2020 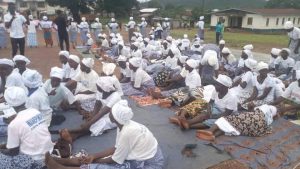 Dozens of women gathered on Tuesday in Zorzor, Lofa County to protest against the increase in alleged ritualistic killings in the county | Photo By: Arthur Koweh

A group of women in Zorzor District under the banner Zorzor District Women Peace Network on Thursday led a day long peaceful assembly to protest alleged ritualistic killings in the district.

Reading the petition to the district authorities, Madam Suah Kpadeh, the leader of the group, decried the growing number of mysterious killings of people, particularly women and children.

Kpadeh lamented that most of these killings go uninvestigated, leaving perpetrators to walk free.

Madam Kpadeh specifically recalled the mysterious killing of a lady only identified as Lorpu in March this year on Gizziboiga town highway and the death of a three-year-old child in Luyeama town, where investigators found a foul to have been played.

Receiving the petition on behalf of the district authority, District Commissioner Joseph Bedell assured the women that action will be taken.

“I want to assure my women, this issue is not going to stop here. We will take it to the superintendent office and if possible, the president. This thing is too much,” said commissioner Bedell. 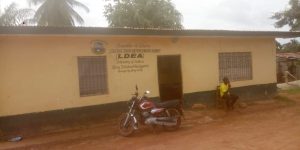 The commander of the LDEA in the county says the office is open to community members to give tips that would lead to the arrest of drug dealers in the county | Photo By: Emmanuel Mafelah

The detachment of Liberia Drugs Enforcement Agency (LDEA) in the county has arrested five alleged drugs dealers in the county including females in connection with sale of narcotic substances including marijuana.

Speaking in Gbarnga at a press conference, LDEA Special Agent Justin Quetoh, who is the commander of the detachment, disclosed that those arrested are: T-Girl Sampson,40, Obena Eddie (Nigerian), 32, and Mark Yan, 41. The trio was arrested in July by the joint security in David Dean’s Town, charged and sent to the Botota Magisterial Court.

Meanwhile, he also named Mary Jean, 32, and Henry Kollie,19, as the other two alleged drug dealers, who he said were arrested in Totota by the joint security including the Police Support Unit (PSU), changed for sale of narcotic substances and sent to the Gbatala Magisterial Court.

He also disclosed that several bags of marijuana were recently arrested at the Gbarnga New Iron Gate from a taxi driver who was heading to Monrovia.

Special Agent Quetoh urged residents of the county to fully collaborate with the LDEA by giving agents tip-off about people dealing drugs in communities. 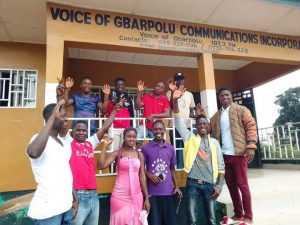 Members of the radio station fan club pose for a photograrph after paying a visit to the station this week | Photo By: Henry Gboluma, Jr.

A listeners’ club of Voice of Gbarpolu has been launched in Bopolu City, with its 17 members expressing their support for the only community radio station in the county while also pledging to expand the membership.

The organizers said the initiative seeks to support the station management by organizing events aimed at seeking support and raising funds to enhance the operation of the station.

Mr. Sylvester G. Varmah, acting chairperson of the club, also said they committed to luring more listeners to the club.

The Voice of Gbarpolu was established to bridge the information gap in that part of Liberia. It is funded by the county and social development fund. But the station management team is struggling to run the station due to hitches to getting funding from the county administration.

The County Health Team has launched voluntary testing for COVID-19 with Dr. Augustine Fannieh, County Health Officer, saying that the campaign is aimed determining the status of the outbreak in the county.

He said people who will be tested negative will receive COVID-19 clearance from the Health Ministry, which can be used for easy travel out of the country.

He said the voluntary testing will last for five days — September 1-5, 2020 — and will be carryout by a mobile team in five communities in Zwedru and its environs and it is expected to collect over 1,000 specimens of COVID-19.

“Grand Gedeans, we called on you today to please cooperate with our mobile team that you will be seeing in your community for free COVID-19 testing, please accept them and work with them,” Dr. Fannieh said.

“COVID-19 is not a death sentence, so do not see them and run away; it’s all about saving yourself by knowing your own health status”.

Those who are accepting the voluntary testing are given a form to fill in for easy identification.

The County has recorded seven confirmed cases, no death, six recovery while one patient is still at the treatment unit and is expected to be discharged shortly.