Around The Country: Updates From Five Counties – September 8, 2020 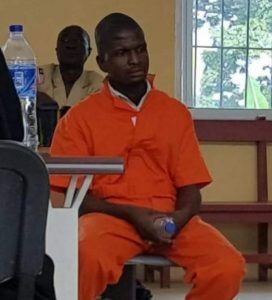 A 33-year-old man has been sentenced to life imprisonment for the crime of rape by the judge of the 10th judicial circuit court in Voinjama. Defendant Tarnue Kollie Jarvah, who committed the act in Yandisu, LPMC community in Voinjama District, was arrested and indicted by the Grand Jury of the County for allegedly raping a 14-year-old girl on May 6, 2020.

According to the ruling by her honor Nancy Finda Sammy, resident Judge of the 10th Judicial Circuit Court, a copy of which is in possession of LocalVoicesLiberia, the victim explained that she was sexually abused on several occasions by defendant Jarvah, who also happens to be the husband of her aunt whom she lived with.

She said on one occasion, the defendant threatened her life and showed her some articles hanging in his room like charm and told her that she would die if she told anyone that he had sex with her.

When the abuse started, the ruling continues, the survivor told her aunt about it, but the aunt took no action. On the second occasion, her aunt promised to take her to the hospital, but she failed to do so.

After final arguments by both state and defense lawyers, Judge Sammy then announced the final ruling:

“Considering that the defendant repeatedly had sexual intercourse with the survivor who is a minor, he is hereby adjudged guilty for the crime of statutory rape, a felony of the first degree in keeping with section 4(a)(I) of the New Rape Law. Therefore, he is hereby sentenced to life imprisonment.”

Meanwhile, the Judge has mandated the County Attorney, Cllr. Luther Sumo, to immediately arrest the wife of the defendant.

“Arrest of the victim’s aunt Madam Moniego Dargbor and bring her under the jurisdiction of the appropriate court for prosecution for failure to have taken any action after the victim immediately reported to her on two occasions,” Judge Sammy ordered.

The Assistant Coordinator of Women in Peace Building Network of Grand Bassa County, Madam Rebecca Zondoe has expressed her support for life imprisonment for rapists.

According to Madam Zondoe, if perpetrators of rape especial the ones against children are sentenced to life imprisonment, “it would serve as lesson for others to desist from such evil act”.

Speaking to reporters recently on the Fairground in Buchanan, the female activist said to minimize rape in the country, “the government needs to see reason in implementing some of those laws for evil doers to change from their wicked behavior”.

Meanwhile, she called on parents to stop compromising rape cases “because of hard time” and report to the Police to help save the lives of children, girls and women from those heartless men whom she described as witch crafts. 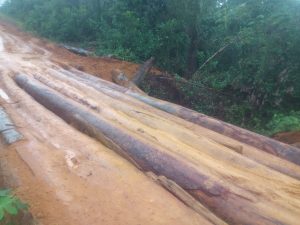 Local business people in the area say rehabilitation of the road will ease their trip to Ivory Coast, where they purchase goods for the local market Photo By: S. Augustine Sokan

The business association of government Camp in Jadea Statutory District through the Atlantic Resources Limited is undertaking a 5-kilometer feeder road project in the district.

According to Romeo Jerboe, head of the association, the road will connect Government Camp and Wakpo in Grand Kru County.

This will reduce the huge amount spent on transportation and sufferings encountered by the business community when commuting to Ivory Coast through Grand Kru and Maryland Counties, Jerboe said.

He stressed that business people are suffering due to the deplorable condition of roads in Jadea, something, which he said, has contributed to the underdevelopment of the area and creates hike in prices of major commodities.

Junior Diah, a motorcyclist in the area, commended the business community for the project, adding that if the road is fixed it will reduce the long and terrible journey to Ivory coast. 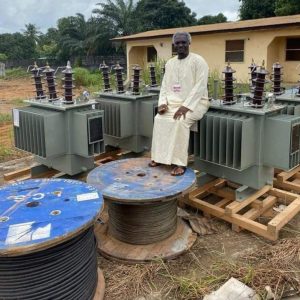 Representative Pennue, who is an aspirant for the Senate in the upcoming election, sits atop one of the transformers, which were purchased by him from Ivory Coast | Photo By: Ben T.C. Brooks

Five communities in the county are expected to shortly benefit from electricity from the Liberia Electricity Cooperation after District #1 Representative complete the purchased of five transformers, which will be distributed to the communities.

According to the Tchine District lawmaker, Hon. Zoe Emmanuel Pennue, communities to receive the transformers are Seniwine, and Duogee Town in B’hai District; Todyville and Baptist Communities in Zwedru, while the remaining one will be turned over to the LEC sub-office in the county to determine which community it will be stationed.

Rep. Pennue, who is now aspiring for the county’s senatorial seat, says that his decision to purchase the transformers followed requests by four communities that are cut off from the LEC power grid due to damaged and insufficient transformers.

He said the transformers were purchased in Ivory Coast and are currently in the county and will soon be turned over to the targeted communities. He put the cost of the transformers at US$11,500 while US$2,500 was spent on transportation. 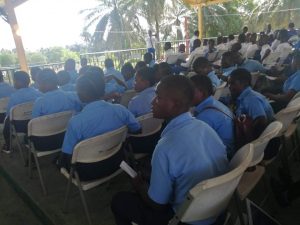 Many of the students say although the cash package from USAID was delayed, they are however grateful for the support | Photo By: Bryan Dioh

Student Margaret G. Hoto of the Pleebo High School, who received L$10,000, termed the package from USAID as a “blessing” to her academic sojourn. She noted that although the money came after the exams, it will now be used to solve some of her financial problems.

Another student at Center Site High School in Pleebo, Mary S. Toe, who said she has not received her money in full, yet she was “grateful to God for being among those that have received the USAID package”. Ms. Toe said she has received L$5000 out of the L$10,000.

“I was surprised to have heard that students writing WASSCE will be given the amount of $10,000 Liberian dollars,” she said, while calling for such support to continue for other students in the future.