Around The Country: Updates From Four Counties – October 12, 2020 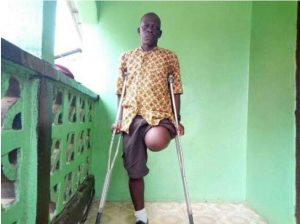 Amos Nusiah was injured in the leg back in 2017 when he was helping national security officers to arrest a murder suspect | Photo By: Emmanuel Mafelah

Amos Nusiah, the man who helped the Armed Forces of Liberia and the Police Support Unit (PSU) in 2017 to arrest a murderer in Bong County, has launched an appeal to the government and humanitarians for support.

Nusiah was shot in his left leg during the search for the murder suspect, Moses Paulkpah, who had murdered his wife. Paulkpah is now serving a 50-year sentence at the Gbarnga Central Prison.

Meanwhile, Nusiah’s leg was later amputated at the Phebe Hospital in the county. Recently, he told reporters that he has been abandoned by the government since his leg was amputated.

“Life has gotten very difficult for me; my children are not in school like before and if my wife does not find a piece of cassava we can’t eat,” Nusiah said.

“I decided to help the PSU by then because it was an instruction given by the government to arrest Moses Paulkpah who planned to keep killing our people. I did not know that risking my life for the sake of the government would have left me in such a mess today.”

After the incident, Vice President Jewel Howard Taylor provided L$30,000 and a bag of 25kg rice to him but since then, he is yet to get any support. 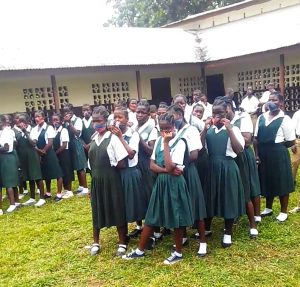 Students at the St. Patrick’s Catholic School in Grand Cess received nose mask as part of the donation | Photo By: Regina Juwle Raymonds

The Grand Cess Community in the diaspora has donated COVID-19 preventive materials to schools in the county with several students and teachers of two schools in Grand Cess benefiting from the gesture.

The P.G. Wolor High School and the St. Patrick’s Catholic School received were nose masks, hand sanitizers, and bleach, amongst others worth US$2,000.

Presenting the materials, the Mayor of Grand Cess, Francis Charlie, said support is a part of effort to help prevent students and teachers from contracting COVID-19.

Mayor Charlie said the materials will enable the students and teachers to efficiently abide by the health protocols.

The beneficiaries commended the diaspora community for the gesture and, at the same time, urged the organization to remain supportive and passionate about helping people back home.

Austin A. Weah, an instructor at the P.G. Wollor High School, called on other Liberians in the diaspora to support their respective counties back home.

Thirty-seven persons have graduated with driving skill from the Computer Secretarial Institute, CSI, which is looking to provide technical skills for youth in the county.

Edward L. Kamara, who served as keynote speaker during the graduation of the 37 trainees, called on them to show distinctions from those he considered as “life damaging driver”.

“Use the education acquired to properly drive our people through the streets, don’t be like those life damagers who call themselves drivers,” Kamara told the graduates while urging CSI to decentralize the program in the county. 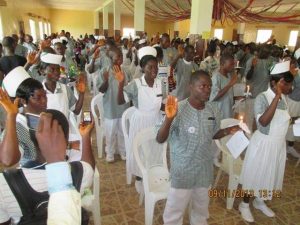 In an effort to boost higher education in the county, the Free Pentecostal College in Voinjama has introduced Bachelor of Science (Bsc) program in four new disciplines.

Dr. Joseph Glenn, the president of the college, said the institution will start the Agriculture, Education, Business and Mass communication programs beginning this coming semester.

Dr. Glenn, who made the disclosure at a press conference in Voinjama, assured the public that the school is currently hiring professionals with the requisite qualification for the four disciplines.

“The public can be sure the Free Pentecostal College has always been dedicated to quality education. We will be hiring qualified professionals for the BSc programs,” he said.

The Free Pentecostal college is the first higher learning institution in the county which started with offering Bachelor of Theology.

The Lofa County Community College, the first public undergraduate higher institution of learning in the county, offers only associate degree.

Now, with plans to offer BSc at the Free Pentecostal College, many young people seeking BSc will not have to travel outside of the county to obtain BSc in any of the four field of studies.