Around The Country: Updates From Seven Counties – October 27, 2020 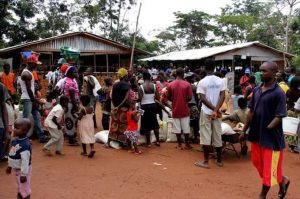 The LRRRC says over 300 Ivoirians have crossed into the county over fear on election violence in their country | Photo By: Ben T.C Brooks

The County Health Team has begun community engagement and collection of specimens of Ivorians who have just entered in the county. According to the Community Health Services Director, Mr. Natus Nyowining, the process started over the week in the Cavalla district.

Nyowining said the community awareness and testing is intended to know the health (Covid-19) status of Ivoirians who have entered the country due to fear that civil crisis may erupt in the Ivory Coast due to that country’s impending presidential election.

On early Tuesday, County Superintendent Kai Garlo Farley announced that over 300 Ivoirians have crossed into the county and have been recorded by the LRRRC.

The Community Health Services Director disclosed that the specimens of 65 people have been collected and sent to the National Laboratory of the National Public Health Institute for testing.

Meanwhile, the county health team has informed communities to report any stranger in their community. 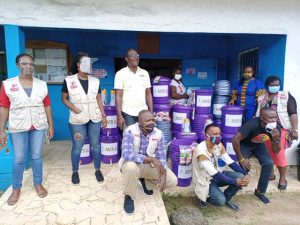 Mercy Corps Liberia has distributed several hand-washing buckets, detergents, and megaphones to the Grand Bassa County Health Team. The presentation was made at the office of the Health Team in Buchanan at the weekend.

Madam Marian Zeo, the Safe Program Manager of Mercy Corps, said the materials are intended to buttress the “fight against COVID 19”.

Stephen James, a representative of the Health team, expressed gratitude to Mercy Corps for “thinking about the Health Team”, adding that the “county is still striving to ensure that COVID-19 becomes a history”.

“On behalf of the county Health Team, I want to say thanks to Mercy Corps Liberia for helping with these COVID 19 preventive material,” James said. “We will ensure that the communities’ benefit from the gesture of Mercy Corp”. 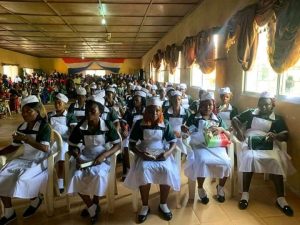 The new graduates were “endeavor to move into the outside world for positive contribution to the health sectors” | Photo By: Bryan Dioh

Fifty persons have graduated from the Cocoa Training Institute of Professional Studies in Pleebo after going through a year of intensive training in nursing aid.

The institute has trained dozens of nurses in the south east. Some are now working as nurse aids at several health facilities. The school serves as an alternative for young people who are unable to enroll at universities.

Dr. Methodust George, Maryland County Health Officer, praised the graduates for devoting their time to studying as they “endeavor to move into the outside world for positive contribution to the health sector”.

George indicated that if Liberia must have a quality health system, there is a need for vocational health institutions to be “gateway to professional health services”.

Meanwhile, the nurse aids are expected to be assigned at various Health sectors in the county. 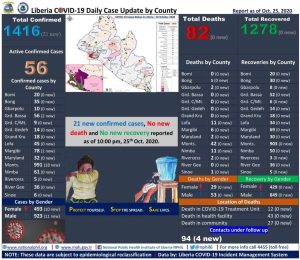 The National Public Health Institute latest update shows an increased in the number of confirmed COVID-19 cases, as 21 news cases were reported on October 25.

This number is the highest number of confirmed cases recorded in a single day since the beginning of October. According to NPHIL, 18 of the confirmed cases were reported from Montserrado, two from Grand Bassa and one from Margibi County.

The increased in the number of confirmed cases in a single day in almost a month is generating concerns about a possible spike in new cases as election activities lead to the gathering of massive crowds of people who do not follow the preventive measures. 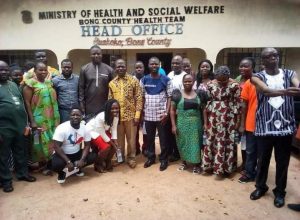 Staff of the county health team posed for a phot with Dr. Flomo following the turning over ceremony | Phot By: Emmanuel Mafaleh

Dr. Jonathan Flomo, the new county health officer, has urged residents of the county to continue observing the health protocols despite the drop in the number of confirmed cases in the country.

New cases of the COVID-19, according to the CHO, may spike if people do not avoid crowded places, continue washing their hands with soap and water, practice social distancing, among others preventive measures.

He added, “My people this virus is real and is still around here, let continue to wash our hands, stop this constant denial. Let work together for a stronger and a healthier Bong County”.

He made the call recently in the county when he officially took over from the former CHO, Dr. Adolphus Yeiah.

Speaking early, Dr. Yeiah praised members of the CHT, nurses and doctors for working with him while he served as CHO. He also called on them to show same support for Dr. Flomo.

A 34-year-old man only identified as Busy Wesley was rescued from angry crowd by the police after he was accused of breaking into a private residence in Barclayville. The incident occurred on October 26 in the Toda’s Community when he was been flogged by community members.

According to the police, the alleged criminal and another person entered the home of Emmanuel Gaweh and made away with over US$800. worth iof items. After he was rescued, police then charged him with theft and burglary.

Speaking to the LocalVoicesLiberia, the commander of the Crime Services Department said it has launched an investigation into the allegation against Wesley and his gang.

Meanwhile, the police have warned community members against mob violence but the angry residents said the alleged criminal and his gang are in the constant habit of burglarizing homes.

As the government and partners continue the fight against the coronavirus disease in Liberia, the Press Union of Liberia (PUL) with support from the United Nations Development Program (UNPD) is conducting a two day training for Journalists on how report on the pandemic.

The training, which is being held under the theme “Proper Communication, the Way in Fighting Coronavirus” is being held in Tubmanburg City, Bomi County. It is expected to end on Tuesday, October 27.

PUL vice president, Daniel Nyankonah, said “we noticed that Journalists have slowed their coverage on COVID-19, giving more time to election issues, so it is from that background we spoke to UNDP who agreed to support  this training.”

Day one presentation was focused on Health and science reporting and Global Situation of COVID-19 while day two focuses on risk communications and reporting safely during election.

There are 1416 total confirmed cases in Liberia as of October 25, 2020. Of this number, there are 56 active cases, 82 deaths and 1278 people who have recovered from the coronavirus disease.

As a result, participants said the training is timely and will help refresh their knowledge about how to report on the pandemic to help curb the spread of the virus.