Around The Country: Elections Update From Six Counties – October 30, 2020

JiStay informed with happenings in your county, follow LocalVoicesLiberia every week day for the latest update on the Special Senatorial elections, COVID-19 and other important developments. 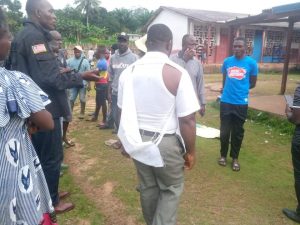 Principal Eusebio Towaye (in torn white shirt) alleges that he was manhandled because he refused for supporters of a Candidate to use the school facility for a political gathering | Photo By: Bryan Dioh

Several supporters of Senatorial candidates in the county were reportedly involved in physical altercations in different locations in Karluway District #2.

In one incident, a school principal was allegedly manhandled for disallowing supporters of James Biney from using the Karlorken High School auditorium.

Principal Eusebio Towaye said his refusal was based on a mandate from the Ministry of Education stating that school facilities should not be used as political meeting ground.

“Whatever action I took to lock the school doors was not my own but it was the policy that governs the Ministry of Education during this political season; so I see no reason why the guys taught to behave bad and flogged me,” Mr. Towaye said.

“This is bad and needs urgent intervention because I’m willing to take the case to court if the Ministry of Education doesn’t do anything to investigate. You know this is the first ever experienced I have gotten and so I think my life is not safe because of our present days environment.”

Meanwhile, he refuted claims that he had allowed other politicians used the very school facilities.

“There was no point in time I have ever allow people to use that building my brother, even when I was not Principal I got angry with people at that time who wanted to use the building for Political purposes. This is bad and must Stop. Peaceful Citizens should not be brutalized because of they not supporting a Politician is bad,” he said.

For his part, George Tambagbessi, Discrepancy officer in the Office of Speaker Bhofal Chambers and a supporter Senatorial Aspirant James Biney who witnessed the incident, denied the allegation that the principal was flogged.

Tambagbesi said the scuffle between supporters of Biney and the principal was masterminded by some supporters of Senator H. Dan Morais.

“It’s Supporters of H. Dan Morais who claimed to be NEC staffers that brought about the fighting after we arranged to use the (school) building,” he said. “They came here in the name of using the school facility for NEC activities while it is us who arranged for the building use”. 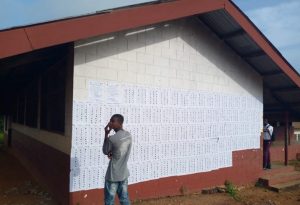 A man stands close to voters rosters posted on the wall of a school in Bopolu City, Gbarpolu County | Photo By: Henry Gboluma

Ernest McCay, the county’s senior election magistrate, said Liberians are not taking advantage of the voter roll exhibition that is ongoing in the country.”

Our centers are poor, according to our staffs we deployed. People are not taking advantage of the exercise,” he said “So, let me say that if you have a 2017 voting card or you took part in the just ended 2020 voter roll update, your information is up; please make sure that they are correct to enable you vote on December 8. We are doing this to avoid future election problem”.

The exhibition exercise, which started on October 28, is expected to end October 31 across Liberia.

The exercise is to enable voters verify information about voter’s identity, registration center name, date of birth, and the voters ID number.

As Liberians gear up for the senatorial election, political parties have begun intensifying campaigns activities. One of such campaign teams is the to pushing for the re-election of incumbent Senator Peter S. Coleman. The team is touring it the county, telling voters why they should re-elect the incumbent.

Speaking to young people in Barclayville, Edward Mortee, a member of campaign team, told young people about the election process, urging them to “campaign in a peaceful manner to make the process successful”.

“You, the young generation, don’t engage yourself into election violence because this can undermine the development in the county, so we want you to think and vote the rightful person,” he said. 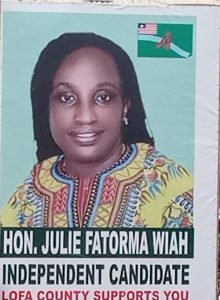 Madam Fatorma (pictured) is one of three female candidates in the impending senatorial election which will also see eight male candidates contesting on December 8 | Phot By: Mawolo Gbotolu

Students representing a group under the banner “College Students in Support of Hon. Julie Fatorma Wiah Political Ambition” on Thursday declared their support for District #2 Representative, who is eyeing the senatorial seat.

James K.K. Smith of the Voinjama Free Pentecostal College and John A. Swaray of the Lofa County Community College said their decision to support is based on a “through scrutiny” of the female lawmaker.

Students Swaray claims the organization has over 250 members, who are all agreed to support Madam Fatoma.

Meanwhile, the chairman of the Friends of Julie, another group supporting the candidacy of Madam Fatoma, said the decision of the university students to support the district #2 lawmaker is “the smartest decision ever”. 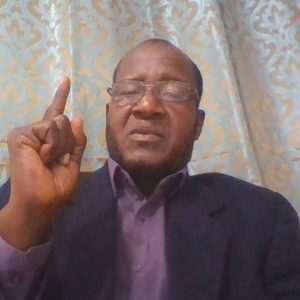 Dr. Alfredson Taikerweyan say electorate, especially first-time voters, should “elect a senator that will bring tangible developments to the lives of the ordinary citizens” | Photo By: Emmanuel Mafaleh

Two prominent sons of the county have called on young people, who are eligible to vote, to turnout on December 8 and exercise their democratic rights for the first time.

Dr. Alfredson Taikerweyan say electorate, especially first-time voters, should “elect a senator that will bring tangible developments to the lives of the ordinary citizens”, many of whom are finding it difficult to make ends meet, while former senator Franklin Siakor say people must turnout to make “Bong County better”.

Said Dr. Taikerweyan: “This election is very much important and the decision that we are going to make will either carry us in front or backward. So as a County and people let vote our conscious, let vote for transformation, let vote reconciliation, unity, and togetherness”.

The call by Dr. Taikerweyan comes amid concerns of voter apathy as some people have threatened not to participate in the election and the referendum. There have also been calls for the postponement of the referendum due to poor awareness by the National Elections Commission.

“Even though we been electing people into power and at the end we doesn’t see the development, our expectations at time haven’t not been mate that should not discourage us from going to vote,” Mr. Siakor told LocalVoicesLiberia via mobile phone. 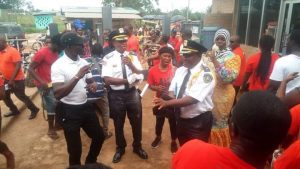 Superintendent Moses Gberyan (right) has been engaging residents of Zwedru since he took over as county police commander | Photo By: Ben T.C Brooks

The newly assigned county commander of the Liberia National Police in the county has promised people of the county that there will be no violence during the pending special senatorial election.

Superintendent Moses Gberyan said he will work with every candidate in the county to ensure they maintain a peaceful election in Grand Gedeh and other counties in the southeastern region.

The newly inducted county commander mentioned that with the support of the joint security, the county local authorities and other stakeholders, there will be a peaceful election.

“Even though we are under manpower, we will try our possible best to assign officers to every political  rally, meeting and even [on] the day of voting at every polling centers in order to maintain our peace,” Gberyan said.

Speaking on behalf of the youth of the county, Eric Destiny Saydee, said they will collaborate with the police only if the commander is fair and not one sided.