Around The Country: Elections Updates From Five Counties – November 2, 2020 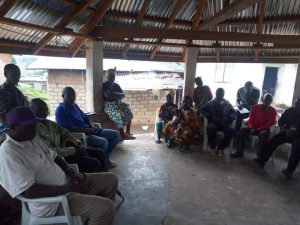 Community leaders and members of the local motorcyclist union attended by the meeting organized the Police | Photo By: Mawolo Gbotolu

The community Services Section of the county’s Police Detachment is urging residents of the county to avoid election scuffle as political tension heightens ahead of the December 8 poll.

The section head, Inspector Francis O. Ziama said series of meetings have been held with motorists and community leaders to find remedy to some possible triggers of electoral violence.

Ziama said working with various groups will hugely help prevent any clash between two or more political movements at a particular street or community.

“Motorists [motorcyclists] are major escorts of politicians and community leaders are usual hosts of politicians as we know,” he said, adding that this means they have to be involved in the conflict mitigation process.

Inspector Ziama added that the Police have also asked all political parties and movements in the county to submit their campaign activities and suitable schedules ahead of the official opening of campaign activities by the National Elections Commission.

“That process is currently ongoing as we speak and we are with the strongest conviction that this initiative will greatly help for a peaceful election that we expect,” he said.

The county has 11 senatorial candidates and despite the disparity of political ideas, there have been no incident of political scuffle so far.

The first Vice President of the Bopolu District Youth Association, Morris Dennis, has condemned the tearing down of some candidates’ flayers in Henry Town, a very populated area in the county.

“We wake up in the morning and saw some of the candidates’ flayers damaged and removed from on the wall in major places in Henry Town,” he said.

“We don’t know who are involved in this bad behavior at this critical time in our country. This is why I have raised it so that people who are involved can stop because it is a trigger for election violence which we done want”.

Meanwhile, the Commissioner of Bopolu District has urged residents of the town and other communities to stop tearing down candidates’ flayers.

“This is the season for political flayers, so I’m warning people who are removing candidates’ posters to desist now,” he said, adding that the community policing is now on the lookout to arrest instigators.

“We have informed our network in the community, and also the police will arrest and send to court anyone who will be spotted bringing down other candidates’ posters; not just in Henry Town but across the district and county.” 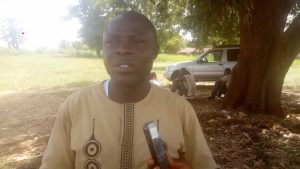 Mr. Coffey said journalists must “be aware that election may create confusion depending on how we report it” | Photo By: Emmanuel Mafaleh

Charles Coffey, the president of the Press Union of Liberia, has warned journalists in the county to stop reporting stories that have the propensity of putting citizens and politicians at loggerhead as the December 8 special senatorial election draws closer.

“Every journalist in the country, all media outlets particularly the print and electronic even online, they’re to be aware that election can create sometimes confusion depending on how we report it,” the PUL President said.

Mr. Coffey believes that journalists, despite the huge challenges they endure, can do more in helping to promote peace among politicians and the ordinary people.

Meanwhile, President Coffey wants candidates vying for the senatorial seat in Bong County and all other counties to educate their supporters about the danger of election violence.

“Let candidates tell their supporters to stop initiating conflict by tearing down other candidates’ fliers,” he told LocalVoicesLiberia at the weekend in Gbarnga.

The former County Coordinator of the Southeastern Women Development Association Grand Gedeh chapter has vowed to ensure perpetrators of gender-based violence face the full weight of the law if she is elected senator of the county.

Madam Felicia F.D. Duncan said it is time for a female to be elected at the county highest seat, adding that once she is elected she will “help reduce [the] cases of Sexual Gender Based Violence and other forms of violence in the county”.

“If I am elected to the Senate, I will work along with the county’s sexual gender based violence chief prosecutor and the county’s gender coordinator to make sure we prosecute people who will commit those crimes in the county,” she said.

“Many crimes are committed mostly against our women and girls and go unpunished due to economic hardship, but that will not happen in my administration if I am elected as a senator. I will make sure would be victim seek justice and its accomplishment”.

The former SEWODA boss was certificated by the National Elections Commission on the ticket of the Collaborating Political Parties to contest the county senatorial seat.

She resigned her position as county coordinator of the feminist organization and is among eight other candidates who are running for the senate. She must also contend against her fellow her female counterpart, Beatrice Sarpee Johnson, who is an independent candidate.

This is the first time for two women to contest for a senatorial seat in the county since its establishment in 1964.

A partial view of some of the 100 participants attending the first training held at the Sinje Youth Cneter in Garwul District on Monday, November 2 | Photo By: Jennah Kamoikai

The Community Watch Forum has begun a training of its members in the county to help mitigate incidents of election tension ahead of the special senatorial election.

Abraham Balo, who heads the Forum, said the training will target 1,000 residents and seeks to buttress the work of the police during the election period.

On Monday, 100 persons participated in the first training held at the Sinje Youth Cneter in Garwul District.

According to Mr. Balo, there were several incidents of violence during the voters roll update exercise in the county and with limited Police presence, it is important that the forum assists the police at various polling centers in the county.

At the same time, one of the facilitator, Emmanuel Pritchard, who is a Police officer and head of Community Policing, said it is necessary to train the community watch Forum members ahead of the election because there is limited police manpower with in the county.