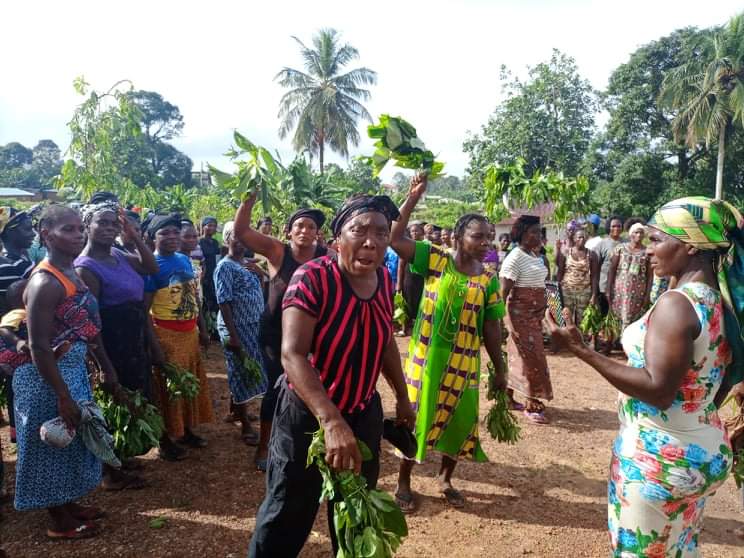 The protesters later moved toward to the county’s Rally Town Referral Hospital, where they continue chanting slogans in support of Dr. Mentoe.

Speaking to LocalVoicesLiberia, one of the protesters, Mary Tarplah, who is also a retired midwife, said “the women of Grand Kru are against the continuous taking away of County Health Officer who are serving the people”.

She said CHO spent less than a year serving the county but has been re-assigned by the Ministry of Health, something she said leaves the county vulnerable.

“We are protesting because the government continues to take away our good-good doctors from us, today is Dr. Mentor,” Tarplah exclaimed. 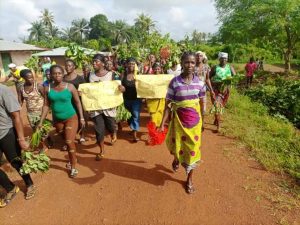 The protesters claim the re-assigned doctor has been working hard to improve the health system including health services for women and children | Photo By: Regina Juwle in Grand Cess, Grand Kru County

She, at the same time, said that women of county are appealing to the Ministry of Health to reconsider its decision by bringing back Dr. Mentoe, whom, the protesters claimed, has been performing outstandingly.

Traplah said the women have decided not to vote in the impending special senatorial election slated for December 8 if their voices are not heard.

For her part, Welleh Nah, another former midwife, described Dr. Mentoe as a “humanitarian” of the health system.

“This woman was a good mother to everyone; she works hard in providing quality health services to us, and she is the only female County Health Officer to Grand Kru,” Nah said. “We are appealing to them [MoH]; we need Dr. Mentoe back to the county.”

Nahdee Klah, another protester and resident of Grand Cess, said : “With the help of Dr. Mentoe, the health system was able to improve and we had huge number of employees who were not on the government payroll but now she tried her best and more are benefiting.

“We the women will missed her because this is the woman who when there no access to electricity at the hospital she managed to carry on a safe delivery of a pregnant woman,  Dr. Mentoe is leaving us without a tangible reason.”