Around The Country: Elections Updates From Five Counties – November 4, 2020 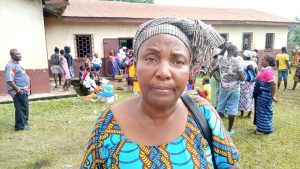 Madam Twealy, a famous advocate in Maryland County, describes the Constitutional referendum process as “cardinal to Liberia but has called on people to boycott the process | Photo By Bryan Dioh in Harper City

A peace advocate in the county is calling on citizens to boycott the pending Constitutional Referendum, arguing that the National Elections Commission has failed to adequately provide information on the referendum, which seeks to change parts of the 1986 Constitution.

Madam Felecia Twealy describes the process as “cardinal to Liberia”, adding that citizens must be knowledgeable about the prepositions or many would vote wrongly.

“I am embarking on a campaign to adequately ensure our people don’t participate in voting any of the prepositions in the referendum,” Twealy said in Harper on Tuesday.

“This is as a result of the National Elections Commission not seriously informing our people about the process and we think this is wrong. You know people will think I am making fun but they will see how Marylanders, especially my women, will not touch the referendum papers.”

She continued: “We need to erect these checkpoints for the betterment of our society because if that’s not done our next generation will judge us”.

Twealy, who has initiated several advocacies — some of which were successful, is calling on others to join her push for the boycott of the referendum.

“We are having several meetings with other CSO groups and once that is done we will move from village to village, town to implement our plans that which we think will be in the best interest of our country,” she said.

Since the announcement of the holding of a national referendum this year, there have been several concerns by people of the county with some calling for adequate education about the process while others claim that conducting the senatorial elections and the Constitutional Referendum will pose confusion for many voters.

Some first-time voters in the county, most of whom are students, say there have not much civic education on how to vote.

Two students and first time voters told LocalVoicesLiberia that they are worried that they may vote the wrong person due to limited understanding about casting the ballot.

Baby-girl Toe and Janet Quayee said since they both obtained their voting cards they have not heard on the radio or see people in communities “teaching us on how to cast our ballot”.

“As two best friends, we have one choice to make, meaning we are voting the same candidate that we have already identified in this special senatorial race of the county, but we are worried about the proper way of  voting because we do not know the way out,” said Janet, who is 19 years old.

Added 18-year-old Baby-girl: “So, we may lose the person we want or better stay at home on the voting day if there would be no one to educate us”.

Meanwhile, the two first-time voters who are residents of Kudah Bye-pass Disco Hill community in Zwedru and 11 grade students of the Zwedru Multilateral High School, are also concerned about the National Referendum.

“We really [do] not want to spoil our votes, so since there is a month almost ahead before the two elections, let those responsible, mostly the National Elections Commission, start to teach we the first time voters on the radio or send people in communities on how to vote,” said Baby-girl.

Despite these concerns, NEC Acting Magistrate, Mr. Alfred Dunner said there are civil society organizations accredited by the NEC to conduct civic voter education within all of the three electoral districts of the county.

Dunner then called on media institutions, mostly radio stations, to aid the commission educate its people about the elections process. 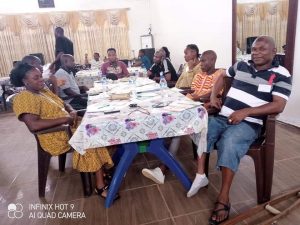 Some staff of the National Elections Commission chat during a break on the day of the training in Buchanan City | Photo By: Elton Wrionbee Tiah in Buchanan

The National Elections Commission has concluded a two-day engagement with persons with disabilities and media practitioners in Buchanan, discussing issues concerning people with disabilities during elections and how the media can buttress the commission’s work.

The forum sought to emphasize the importance of persons with disabilities’ participation in the upcoming senatorial election and national referendum as well as strengthen the NEC’s relationship with the media. 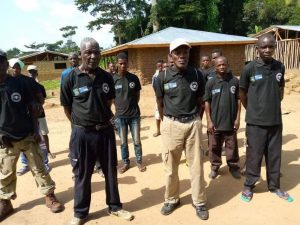 Officials of the newly installed leadership of the Watch Forum during an event in District #2, Grand Bassa County. They are expected to buttress the work the police ahead of the Special Senatorial Election | Photo By: Elton Wrionbee Tiah in Buchanan

Meanwhile, the Community Watch Forum of Grand Bassa County has inducted into office several persons as leaders of the District#2 watch team. The new leadership was set up to aid the police as the crucial December 8 election draws closer.

Justin Tarr, Chairman of the Watch Forum, told reporters that the new leadership will work with the Joint Security which is made up of the Police, Drug Enforcement Agency and the Immigration Service, among others.

“We are aware that this District doesn’t have many police officers and so we have trained many community Watch team members to work with the police and other security [personal] for the safety of all of us,” Tarr said while encouraging his colleagues to work for the betterment of the community and their families.

“We were able to get some support from the county [administration] and so we have come to help empower them to work “. 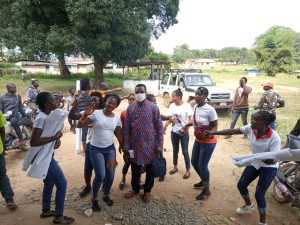 Supporters of senatorial candidate Tamba Aghailas (middle) welcomed him with dancing and singing when he recently arrived in the county to begin his “consultation” | Photo By: Mawolo Gbotolu in Voinjama

On Monday November 2, senatorial hopeful Tamba Aghailas was blissfully accompanied by his supporters including motorists to the head offices of the “Friends of Aghailas” in Voinjama City.

Hon. Aghailas, speaking to our reporter, said that he has come “fully prepared” to continue his political consultation across the county.

“Lofa is my home; you will always see me around. And more over, I have come fully prepared to continue my consultations to the remotest part of Lofa,” he said amid cheers and chants by his supporters. “Lofa must lead again,” he added. 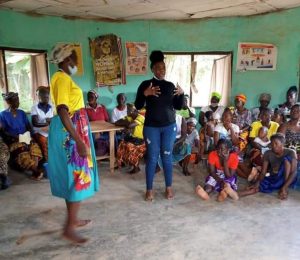 Ms. Taylor (in dark top) has been campaign for peaceful elections since this electioneering period | Photo By: Emmanuel Mafelah in Gbarnga

Tiangeh Taylor, Executive Director of Impart Girls, has called on people of the county to be “peaceful” during and after the conduct of the special senatorial election.

The county needs to be aware that Liberia is the only country that we have and as such maintaining and promoting the peace should be paramount to all, she said.

“My people let us be peaceful in this electoral process election can come and go but we will still be here. On election day come out to vote your choice in a very peaceful manner,” she told marketers at the Suakoko market recently when she embarked on peaceful election awareness campaign in the county.

The Impart Girls boss is, at the same time, urging the National Elections Commission (NEC) to conduct a free, fair and a transparent election across the country.

A free, fair, and transparent 2020 will further inform the international community that Liberia is heading for transformations in the sub region, she said.