Debate on Constitution Referendum: What are People Asking? 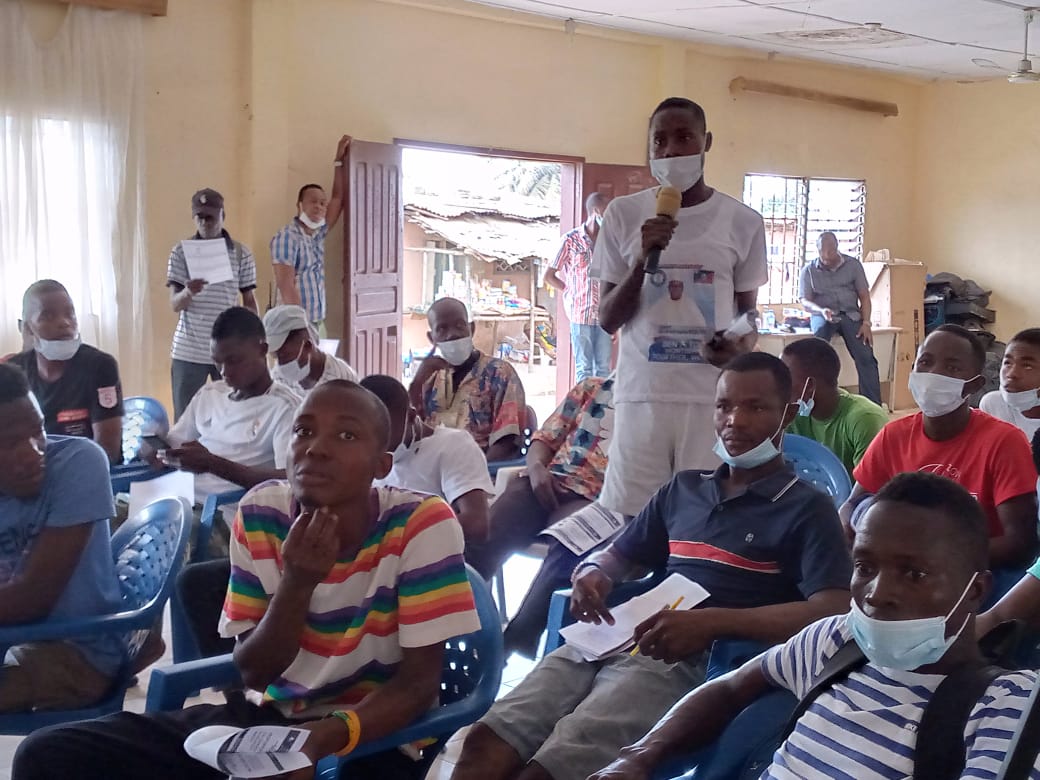 Bushrold Island, New Kru Town – Residents of New Kru Town are concerned about trending issues regarding the conduct of the constitution referendum slated for December. There have been increasing calls for the postponement of the referendum by Liberians from all walks of life.

At the first of a series of Community Media Forums on the referendum held in the New Kru Town Hall organized by the Center for Media Studies and Peace Building (CMESP) on November 3, residents asked a wide range of questions after a panel discussion featuring Atty. Oscar Bloh Chairman of the Elections Coordinating Committee and Cllr. Bobby Livingstone, Secretary General of the Liberia National Bar Association.

Here are some of the questions the participants sought answer to:

Sylvester Konah: “Is it necessary within the confines of the law for the president to tell his citizens to vote ‘Yes’ to all the prepositions within the referendum as seen on billboards?”

Response by Cllr. Livingstone: “The referendum is not about the president. Civil society organizations including the National Bar Association are calling on the president to remove his photograph from on the campaign materials for the Referendum. He is the president today; he wouldn’t be tomorrow. It’s not for him, about him, it’s about the citizens of Liberia”.

Chucky Thomas: “Will the Counselor Bobby Livingstone work in line with the opposition to make sure that this process of referendum be put to halt?”

Response by Cllr. Livingstone: As long as it’s done in the confines of the law, I’m a lawyer and would join anyone. I am not a member of any political party but if anything has to do with the law in Liberia it affects everyone. Referendum is a welcoming idea but for the citizens to participate as intended in Article 92 of the 1986 Liberian Constitution, they must participate like any other electoral process from an informed point of view. 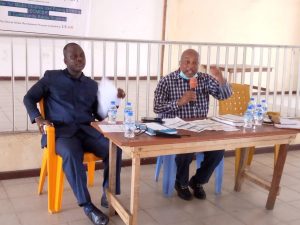 Cllr. Livingstone, Secretary General of the LNBA (left), was asked by a participant whether he will work with the opposition to halt the referendum | Photo By: Aria Deemie

Joshua Kovah: “Can the referendum give the president the right to go for the third term?”

Response by Atty Oscar Bloh: “I’ve got problems with how they grouped five articles in the preposition. If we were to do it the right way Article 45, 47, 49, 59 should be separated and then we vote Yes or No for each article. But they combined all together so if you say yes, you would say Yes for all. 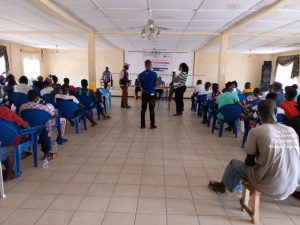 Over a 100 persons attended the CMF on the Constitution Referendum in the New Kru Town Hall on November 3 | Photo By: Aria Deemie

“If we say yes to article 59 and there’s no article 59 on the ballot paper cause they grouped everything to one but if you say yes to the second preposition you’d change the tenure of elected government officials then it means you’ll be changing Article 50 which will reduce the tenure of the presidency from 6 to 5 years. If we do that then that means we’re changing the Senate, Representatives and the tenure to elect the Senate Pro Temp and the speaker of the house.

“Then that means there would be a solid argument that the president can say, I have the right to seek two six years term. Now we change Article 50 from 6 years to 5 years. It is a valid argument.  The president could say his first term is starting in 2023, running for two 5 years term but that is not with the spirit and intent of the Constitution.”

Nicholas Doe: “Why do we stand to benefit if the referendum is voted upon?”

Response by Atty Oscar Bloh: “What we intend to benefit should be explained in the gazette. The gazette should tell you this is the current law, we want to change it to another law and this is the reason why we’re changing it.”