Around The Country: Elections Updates From Six Counties — November 9, 2020

Senator Armah Zulu Jallah says he will file a writ of prohibition against the conduct of the Constitution referendum because of the lack of awareness by the Elections Commission | Photo By: Henry Gboluma, Jr.

With less than five weeks to the December 8, 2020 Special Senatorial Election and Constitution Referendum, a senatorial candidate in Gbarpolu County is opting to file a complaint to the Supreme Court to stop the conduct of the referendum.

Incumbent Senator Armah Zolu Jallah, who is seeking re-election, made the assertion on a on a local radio in Bopolu City recently.

There are three propositions for the 2020 referendum. The propositions are the dual citizenship for natural born Liberians, reduction in the tenure for elected government officials and the change of election day from October to November.

But Senator Jallah said that there are “many issues” attached to the referendum that need to be addressed.

“I supported legislative action to seek amendment to the constitution, bu1t I believed as the constitution requires, the referendum is not qualified to go on this December,” said the former Senate Pro-Temp, who is also an Attorney-at-Law.

He added that Article 91 of the Constitution provides that “there should be awareness for one year on a referendum before it is held”.

“Even up to now, I don’t know how much awareness have been done by the National Elections Commission to hold this referendum,” he said. “I believe that the referendum should be abandoned now and the vote on the referendum can be taken on a later date after the required constitutional public awareness is done.”

Meanwhile, Senator Jallah claims that reducing the presidential tenure will give the chance to any president to run for a third term.

“We don’t want to create a legal framework that will give anybody the opportunity to run for the third term,” he asserted. “We will go to the Supreme Court, file an injection for them to decide.”

Meanwhile, the NEC Magistrate in Bopolu City, Ernest McCay has told reporters that there is an ongoing awareness on the pending referendum.

“We deployed civic educators and they are in the field informing the people about this referendum,” he said. 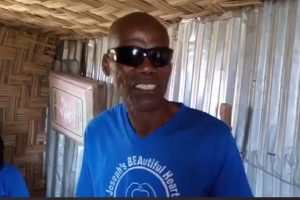 Robert Kpado said many visually impaired persons in the county have not been taught how to vote during the upcoming elections and referendum | Photo By: Elton Wrionbee Tiah

Ahead of the Special Senatorial Election slated for December 8, the head of the Christian Association of the Blind in Buchanan has called for more awareness on the upcoming election and referendum.

Robert Kpado said many visually impaired persons have not heard about the election and referendum, adding that they are yet to get proper civic voter education about how to participate in the process.

“Some of us listened to radio and heard about the election and referendum but how are we going to know the right thing to do if there is no training for us the blind?” Kpado said.

“I am calling on the National Election Commission to hold a special training section for we the blind people because we are part of the society”.

Kpado warned that people with visual impairment might not participate in any of the electoral process if the NEC refuses to listen to their plight by training them on how to vote.

Recently, the Election Commission unveiled the symbols of the Constitutional referendum in Buchanan at an event that brought together various stakeholders, but some residents are concerned that there have been poor Civic Voter Education about the process. 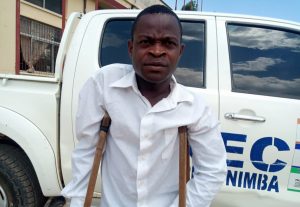 Abestie Tozay is calling on the Election Commission to focus only on the senatorial election and conduct the Constitution referendum at a later date after massive awareness | Photo By: Joseph Solo

The community of persons living with disabilities in Nimba County has expressed concerns that “there is no adequate education on the first and second prepositions for the Constitutional Referendum”.

The first preposition calls for dual citizenship for natural-born Liberian while the second proposition seeks to reduce the tenure of elected officials.

Abestie Tozay, the president of persons living with disabilities in the county, told journalists that his members only support the proposition which calls for the change of the election day because of the challenges they have encountered in the past on election day due to the rainy season.

“So, we think if the election day falls in the dry season, it would be good for us,” Tozay said on Monday in Sanniquellie  after a day-long dialogue organized by the Liberia Media for Democratic Initiative on the 2020 Special Senatorial Election and National Referendum. “Besides the change of election date from rainy season to the dry season, the remaining two prepositions are very problematic.”

He continued: “If you want me to agree with you on dual citizenship, then you need to educate me about the benefits. Is it that only Liberians in America will benefit or Liberians from other African countries will also be covered? Questions like this need specific answers if we must be convinced to participate.”

Meanwhile, Tozay noted that the reduction in the tenure of elected officials is complex, adding “we cannot give just one vote for three propositions. That will be a total confusion”.

“The reason many people are saying that we should say ‘yes to all of the prepositions’ is because they have hidden motives. Therefore, prepositions one and two need serious explanation,” he added.

The president of the disabled community then called for the unconditional cancelation of the national referendum and recommended that the National Elections Commission focus on the Special Senatorial Elections. 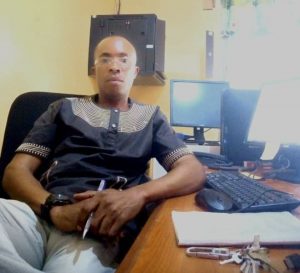 The acting election magistrate of Grand Gedeh County says series of discussions have been held with the Ministry of Health to ensure Covid-19 preventive measures are adhere to on election day, adding that the MoH has agreed to support poll workers.

Mr. Alfred T. Dunner said that every polling center and precinct will have hand washing bucket and an assigned health worker to help ensure that all health measures are followed by voters. The county has over 400,000 registered voters – a figure that is considered low due to various reasons.

Meanwhile Mr. Dunner has disclosed that all electoral materials are in the county ahead of the December 8 poll. But he outlined several challenges that poll workers may face including the bad road conditions in rural parts of the county.

At the same time, he called on the public, mostly youths, to avoid election violence by “always channeling  their grievances through the rightful procedure by officially complaining to NEC if they observe anything wrong instead of spreading rumors”.

Several residents of Robertsport city are calling for more awareness on the upcoming special senatorial election , stressing that they will only participate in the poll if they understand the process.

They residents phoned in during a radio program that sought to gauge the public understanding of the Constitutional referendum.

The program was conducted on Radio Cape Mount on November 8, with participants stressing the importance of more civic education in the various vernaculars to help locals better understand the process.

The callers recommended the postponement of the referendum until more awareness is carried out by the National Elections Commission.

Some called for lawmakers to help the NEC augment civic education about the referendum while others suggested that the NEC should hold the referendum separate from the special senatorial elections, which is also slated for December 8. 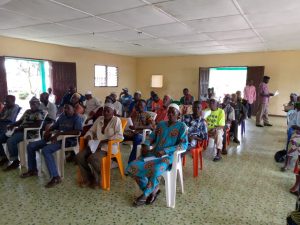 Many participants of the one day event were members of the Muslim community in Tubmanburg | Photo By: Ibrahim Sesay

A one day gathering aimed at discussing violence free election in Bomi County has taken place in the Tubmanburg. The program was organized by Kondeh Muslims United Association. It was held on Friday November 6, 2020.

In a brief introductory statement, the secretary of the association, Armah Rogers said “Islam is a religion of peace” and as such the idea of peace should not only be on the lips of Muslims but to take steps by preventing conflicts.

“This peace should not be call on our lips but we as Muslims should take steps to prevent conflicts,” said Mr. Rogers, who then reminded the people of the county that “Liberia struggled to get peace 15 years back and the Muslims will not allow the peace to slip off their hands”.