Around The Country: Updates From Five Counties – November 10, 2020 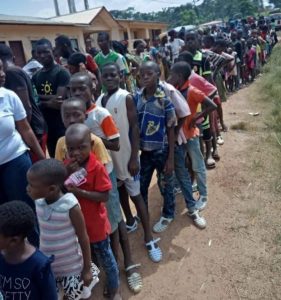 Since late October this years, hundreds of Ivorian refugees have been crossing into Liberia because of fear of elections violence in their country | Photo By: Ben T.C Brooks

The number of Ivoirian refugees entering through the country’s borders with Grand Gedeh County continues to swell on a daily basis, according to the B’hai District Commissioner.

Speaking with LocalVoicesLiberia via mobile phone, Mr. Sam Quarty said “there are many Ivoirians entering through the main Toe Town border point and other underground [border] points leading to the district”.

He said while working with the LRRRC field officers assigned in the district, they have received more than 90 Ivorian refugees, who are mostly women and children.

Ivorian refugees are also crossing into the county through other porous borders including those in Cavalla, Tchine, and Konobo districts, respectively, he said.

Many of the refugees say they are fleeing the country because of fear there might be electoral violence as presidential election results announced on Monday put incumbent Alassane Ouattara in the lead after more than 94% of the votes have been counted so far. 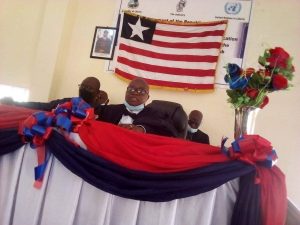 Judge Konto, speaking at the court’s opening on Monday, said jurors must follow the COVID-19 protocol during this term  | Photo By: Emmanuel Mafelah

The Resident Circuit Judge of Bong County, J. Boima Konto on Monday said the November term of court will have jury trial, but jurors will have to abide by all the health protocols.

“We are going to have a jury trial for this term of Court, but we will not allow people to violate the health protocols,” Judge Konto said.

“The court is opened to the public for business, but in so doing our people will have to understand that coronavirus is still in Liberia so you will have to respect the regulation here”.

The latest National Public Health Institute update on Liberia’s Covid-19 situation released on Tuesday shows that Bong County has not recorded a new confirmed case. However, since the pandemic the county has recorded a total of 36 confirmed cases – 30 recoveries and five deaths.

Judge Konto’s comments at the reopening of court comes amid growing misperception in the public that the threat from the virus has diminished although there were nine new confirmed cases recorded in the country on Tuesday. This makes the total number of active cases in the country 68.

The Judge also sent out a strong warning to people doing business with the court to strictly abide by the health protocols.

At the same time, he warned staff of the court to work diligently void of political interference or influence. He stressed: “As I indicated, we are not politicians so everything we do should be in line with the law. So, if anyone is in this court or in the judiciary and is a politician or wanting to be a politician just resign and go into politics or stay into politics, we wish you farewell.”

“A judge or lawyers border on wisdom in the way to deal with high core criminal matters that come before you as a judicial actors, always be wise and don’t allow politics to eat you up”.

He added, “The just ended term of court I have a reason to believe that citizens of Bong County were very law abiding or respectful of the law evidence by low cases emerging from the communities”.

For this term of court, there are 36 criminal cases and undisclosed civil cases on the docket including 18 cases on the sexual offensive division, he disclosed.

Barely a week after the Medical Director of the Liberian Government Hospital in Buchanan alarmed that the hospital lacked a functional ambulance, the Ministry of Health was quick to supply a new ambulance and an ultrasound machine to the health facility, which is the main public referral hospital in the county.

Dr. Abraham Jawara, Medical Director of the hospital, told reporters on November 8 that he was excited that the Ministry of Health listened to their cries.

“I am happy today as the Medical Director of this hospital because we have suffered for so long and today, we have an ambulance and an ultrasound machine,” he said.

It can be recalled that Dr. Jawara told community radio stations in Buchanan that “the lives of patients in critical condition were at risk” after the only ambulance broke down last week.

An ultrasound machine was also supplied to the Liberian Government Hospital by the Ministry of Health | Photo By: Elton Wrionbee Tiah 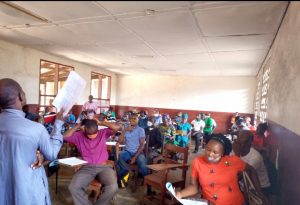 Over 330 teachers of public and private schools in the county participated in the training | Photo By: Henry Gboluma, Jr.

Ahead of the next academic school year, the Ministry of Education and UNICEF have completed a five-day refresher training for 334 public and private school teachers in the county.

The training was conducted at three sites, according to the County Education Officer, Madam Oretha Wonday-Brown.

The training help “sharpen the skills of the teachers in classroom management, lesson planning, student evaluation and COVID-19 pandemic prevention in schools,” she said.

Meanwhile, Madam Brown is urging beneficiaries of the exercise to “go back and help others [teachers] who did not benefit”.

“You have completed this week long workshop, please go back and pass the knowledge acquired to your colleagues in other to improve learning outcomes in this part of Liberia because society depends on you for the brining up of the future leaders,” she said while urging school administrations to “add seriousness to the observation of the COVID-19 prevention measures”.

People attending various gatherings or seeking services at public places are most often refusing to abide by the health measures which include washing their hands before entry, wearing of nose mask and or observing physical distancing.

And Dr. Torpor told reporters recently that despite the easing of COVID-19 restrictions by the government, this does not mean the county or country is free from the virus.

Currently, Rivercess County has no new confirmed case of the novel Coronavirus, but the county had earlier recorded five cases with two of the patients recorded dead and three later recovered.