Referendum: Official Says Voters Should Check “Yes” on Everything 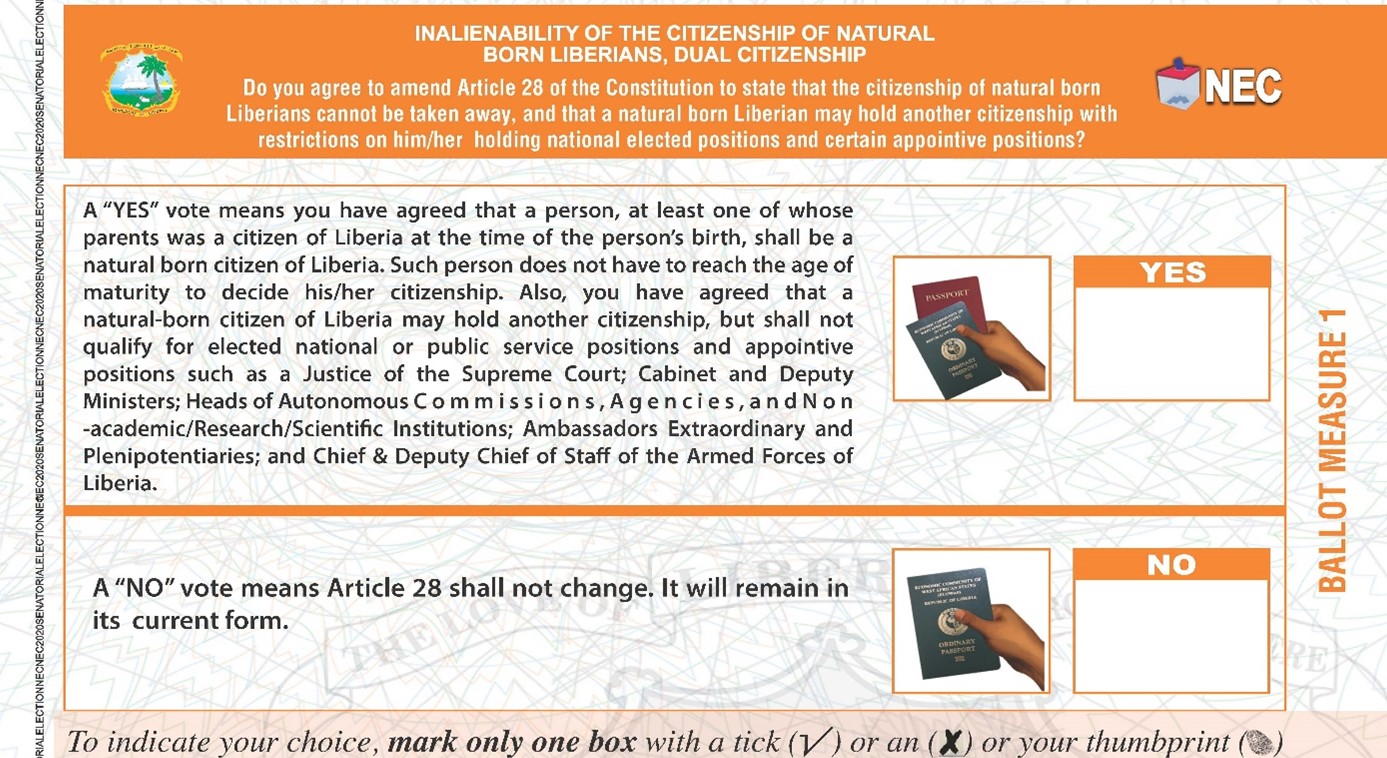 Monrovia – The Minister of State for Presidential Affairs and Chief of Staff to President George Weah, Nathaniel McGill, urged the electorate to vote “YES” for all eight propositions in the national referendum, scheduled to take place on December 8. Voting “YES” to all the prepositions, McGill said, is in support of good governance and in the interest of the country.

Minister McGill also insisted that there was sufficient voter awareness about the propositions, which was done during the Constitution Review process in 2016 headed by former Justice Minister, Cllr. Gloria Musu Scott.

“When people say there is no sufficient education, my question to them is, what about the two years that we, people of Liberia, took going across the length and breadth led my Gloria Musu Scott, former Vice Chairman of the Unity Party, seeking the participation of our citizens?”

He called on those in the opposition to join Government campaign for a “YES” vote. 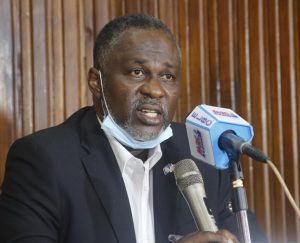 But despite the government’s insistence that there was sufficient awareness, voters continue to voice strong concerns that they are not prepared for the vote. The NEC has registered close to 300,000 new voters, who may have never cast a voting ballot before.

“I think the government wants to force something that many Liberians have no clear idea about. It will be more confusing voting for the referendum and also the senatorial election,” said Albert Yenkee, a Liberian citizen registered to vote.

“I will not vote for the referendum,” said voter Comfort Gray. “I will only vote for my senator” she said. Asked why, Gray said that she has not been educated about how to vote for the propositions.

What is a referendum?

A referendum is, according to the Merriam-Webster dictionary, the practice of submitting to popular vote a measure that was passed by the legislative body, or by popular initiative. The government of Liberia is organizing a national referendum on December 8, in which it calls on Liberian voters to cast a ballot on eight proposed constitutional amendments, also known as propositions.

A proposition is a proposal to enact a constitutional amendment that is placed on the ballot for approval or rejection by the electorate.

In addition to ballots for the Senate elections, voters will also receive an additional ballot with eight questions, one for each proposition.

The propositions will ask voters whether or not they agree with the following questions (YES or NO vote), as provided by the NEC:

A “YES” vote means you have agreed that a person, at least one of whose parents was a citizen of Liberia at the time of the person’s birth, shall be a natural born citizen of Liberia. Such person does not have to reach the age of maturity to decide his/her citizenship. Also, you have agreed that a natural-born citizen of Liberia may hold another citizenship, but shall not qualify for elected national or public service positions and appointive positions such as a Justice of the Supreme Court; Cabinet and Deputy Ministers; Heads of Autonomous Commissions, Agencies, and non-academic/Research/Scientiﬁc Institutions; Ambassadors Extraordinary and Plenipotentiaries; and Chief & Deputy Chief of Staff of the Armed Forces of Liberia. 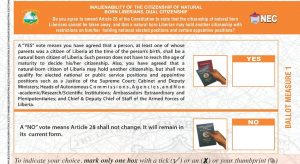 A “YES” vote means you have agreed to amend Article 83(a) so that the General Elections can be conducted on the second Tuesday in November.

A “Yes” vote means you have agreed to amend Article 83(c) to reduce the time the National Elections Commission has to hear and decide complaints on the Elections from 30 days to 15 days.

• A “YES” vote means you have agreed to amend Article 45 of the Constitution to reduce the term of the Senators from 9 years to 7 years.

A “YES” vote means you have agreed to amend Article 47 to reduce the term of the Pro Tempore from 6 years to 5 years.

• A “YES” vote means you have agreed to amend Article 48 of the Constitution to reduce the term of the Representatives from 6 years to 5 years.

• A “YES” vote means you have agreed to amend Article 49 of the Constitution to reduce the term of the Speaker and Deputy Speaker from 6 years to 5 years.

On November 18, the Supreme Court, issued an opinion in which found that the government’s decision to place eight propositions on just 3 paper ballots was against the law. The Court argued that the NEC has condensed 8 propositions on just 3 ballots, contrary to the “clear language of the Resolution of the Legislature,” and “contrary to the provision of Article 92 of the Constitution which specifically mandates that each of the eight propositions be stated separately on the ballot to afford voters the opportunity to exercise their right of choice.”

On November 25, the National Elections Commission (NEC) officially confirmed that the referendum will take place, as scheduled. However, instead of the original 3 propositions, there will be a total of eight propositions that voters are expected to vote on.

Politician Calls Fraud Without Evidence
Braimah Promises: “I Will Defeat the Men”