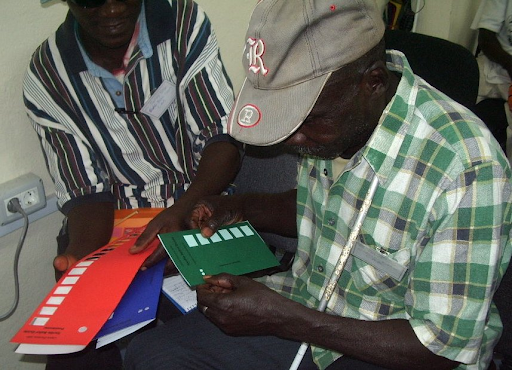 Bong County — The people living with visual impairment in Salala believe that their vote is not truly secret, not even after the introduction of the tactile ballot, also known as “tac-tac,” in 2017. They believe that the National Elections Commission (NEC), and the government in general, have not placed much importance on educating those who suffered loss of eyesight on how to use a tactile ballot.

“I feel cheated in the absence of the tactile ballot,” said Edwin Mulbah, a Lutheran evangelist who became blind after an accident at an ordination ceremony in Kakata, Margibi county. Despite the challenge, Mulbah has never missed an opportunity to vote.

But while the tactile ballot offers the people with visual impairment the possibility to vote in secrecy, the secrecy is gone when voters are not trained how to use a tac-tac ballot, and they still need voting assistance from another person who will be there in the voting booth with them.

Mulbah said that he has not been fortunate to meet the NEC civic and voter education (CVE) teams in 2017 or 2020, but he was thankful to his Lutheran fellows who provided support in previous elections.

“For someone to hold your hand and direct your finger to his choice is so sad. So, I am therefore calling on NEC to double up their effort in educating us, the visually impaired voters.”

Ninety-year-old farmer James Foday, said that supporters of certain political candidates and sometimes church members instruct him how to vote for the candidates they support, and he feels cheated.

“We are as important as those who can see too,” said Foday, who said he has never benefitted from civic and voter education on tactile ballots. A graduate of both the Booker Washington Institute, and the University of Liberia, he became blind after an unfortunate accident while managing former President Williams V.S. Tubman’s estate in Salala District, Bong county. 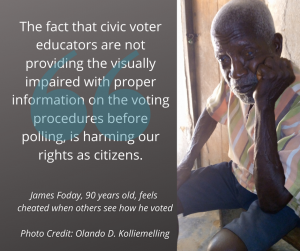 James Foday, 90 years old, feels cheated when others see how he voted –but he can’t. | Photo Credit: Olando D. Kolliemelling

The fact that “civic voter educators are not providing the visually impaired with proper information on the voting procedures before polling, is harming our rights as citizens,” he said. “We want the National Elections Commission and Civil Society Organizations to consolidate efforts in protecting [the] visually impaired,” he continued.

Foday welcomes the support of his church members, but he wants to be truly free and independent when he casts his ballot, which should be secret.

But Foday wanted to give credit where credit was due. He said that in all the times that he had voted before, the NEC staff treated him with respect: “Polling staff are always generous to me, they respectfully guide me, with the Voter Identification Officer (VIO) giving me the correct information on how to vote.”

However, in the three years since the last election, people who are visually impaired say that there was limited or not training to their community on how to use the tactile voting device that enables a visually impaired person to vote in secret, without any outside help.

“The person helping you can easily know who you are voting for,” said Jefferson Sackie, who lives with visual impairment. 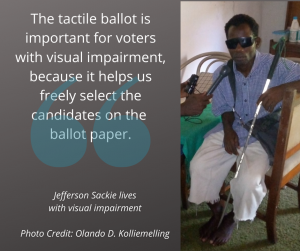 Jefferson Sackie wants that the NEC provide education on how to use the tactile ballots to vote. Photo Credit: Olando D. Kolliemelling

Liberia first attempted to introduce “tac-tac” tactile ballots for the people living with visual impairment in 2005. However, according to the Carter Center, “education for both NEC staff and voters regarding the use of tactile ballot guide was limited, and Carter Center observers in those elections noted that blind voters continued to utilize assisted voting procedures rather than the tactile ballot,” a report published in 2017 stated.

According to a 2018 report by the United Nations Development Programme (UNDP), the Constitution of Liberia does not specifically mention civic or voter education, but Article 6 guarantees “equal access to educational opportunities and facilities for all citizens to the extent of available resources” and emphasizes “the mass education of the Liberian people and the elimination of illiteracy.”

Braimah Promises: “I Will Defeat the Men”
Government’s Decentralization Failure Leads to Ethnic Politics and Divisions