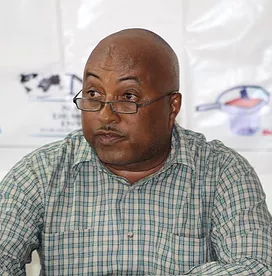 MONROVIA — Oscar Bloh, who leads Liberia’s main election observation group, the Elections Coordinating Committee (ECC) called on politicians and their supporters to disengage from the usage of ethnically charged political slogans that could create chaos in the country’s young democracy.

During an exclusive interview, Bloh said that looking back on the country’s past, slogans like “This is our Time” should not be used as campaign messages or political rhetoric because such statement can incite violence and will further risk dividing the country.

Bloh referred to messages and slogans that have the potential to escalate tensions between rival tribes and groups of politicians.

“Liberia’s democracy, which includes the conduct of free and fair elections, is heavily influenced by ethnicity and other social affiliations,” he said, adding that “Liberians are greatly oriented by their ethnic groupings.” Ethnic rivalries continue to thrive, Bloh, said, because of the central government’s failure to provide inclusive service deliveries to all people, not just to certain tribes, ethnicities, or regions. In the midst of this deficiency, people tend to rely on their own class, their own chiefdoms and ethnicities for solidarity, Bloh argued.

“Our democracy is quite new, and some people may have high expectations in trying to compare our democracy with other advanced countries’, which will not work easily. Therefore, we need to push the agenda by working harder to depoliticize and remove ethnic factors from the way we vote. It seems like a difficult task, because of the high illiteracy rate in the country, which makes it difficult for citizens to make informed choices,” Bloh stated.

The growing inequalities, perpetuated by the central government, force citizens to rely on their ethnic groups as a means of support, adding that ethnic factors cannot easily be rooted out shortly before an election. It must be an ongoing process that continues in between the elections.

“The growing wave of economic inequalities affects the most impoverished voters, who lack education, and who lack the ability to make informed and truly independent choices at the voting booth. In some instances,” Bloh said, “politicians take advantage of the situation to exploit the vulnerability of these voters.”

From ethnic to ethic politics

The government and civil society organizations (CSOs) have a responsibility to change the narrative on ethnic politics, Bloh argued, but they are not fully empowered and equipped to carry out the duty of providing civic education to voters and prevent them from falling prey to ethnic politics.

Senior media executive, Frank Sainworla, reminded that the troubled civil war in Liberia’s recent history had elements of ethnic rivalry when people were singled out and killed because of their tribe or ethnic group.

“The country as a nation has no benefits, or interest, in ethnic divisions. It is rather selfish politicians who use ethnic divisions and rivalries for selfish political ambitions and as a means of getting political relevance,” Sainworla said. He called on Liberians to act smart and know what kind of campaign message to accept and which one to reject. “The citizens will be showing their true patriotic behaviors by not putting self-interest above national interest,” Sainworla added.

The mass media and journalists also play a role in shutting down ethnic politics when they see it to eradicate ethnic politics from the country’s fragile political landscape through awareness and discouraging politicians from disseminating divisive messages through their media platforms.

Long before the arrival of the freed slaves from America, and who later became known as the Americo- Liberians, sixteen indigenous ethnic groups inhabited modern-day Liberia, according to a study by Heneryatta Ballah and McNair Scholar of the Pennsylvania State University, in the United States. Upon arrival, the Americo-Liberians segregated themselves from the indigenous Liberians and colonized them. “This action laid the foundation for the policy of political and economic exclusion of native Liberians from the affairs of the country, a policy that would later result in civil conflict,” the same study showed.

More than 300,000 men, women and children perished in the Liberian civil war, and many more have been displaced.

It was a dark era of Liberian history and humankind that cannot be repeated, and every Liberian has a responsibility to reject politicians that incite to ethnic slurs, and to practice inclusion and tolerance as a nation, not as a tribe.

Salala, Bong County: No True Voting Rights for the Visually Impaired
Montserrado County: Voters in the Dark About the Referendum