Around The Country: Updates From Eight Counties – December 2, 2020 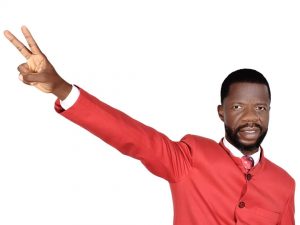 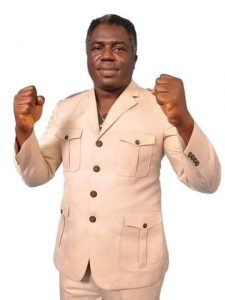 Supporters of Mr. Yealue (in red coat, top) and Rep. Koung have been making comments against one another since campaign activities started in the county

“Senator Prince Johnson had the guts to instruct his supporters in Buutuo to hunt down my supporters in the district. But let me inform him… from now going forward, I have instructed our supporters to equally respond to any attack from the camp being supported by the senator,” Rep. Kogar said on a local radio in Sanniquellie on Tuesday. “My supporters will not back down in events of further attacks from the supporters of Rep. Koung and Sen. Johnson”.

The threat of election violence came barely three days following the alleged vandalization of the only local radio station in District #5. According to reports, supporters of the People Unification Party and the Movement for Democracy and Reconstruction of Senator Johnson clashed at Radio BKS. They were quarrelling about getting broadcast time at the radio station.

“Supporters of Garrison Yealue and Samuel Kogar were very violent during that regrettable occurrence. They could not listen but decided to vandalize the radio station and injured people,” said Zapheniah Gban, Statutory District Superintendent of Zoe-Geh Statutory District.

“This act of vandalism has been condemned by the district. The radio has been off since that incident because the facility was damaged.”

When contacted, Sen. Johnson denied ordering his supporters to attack any candidate. And Lazarus Dahn, a reporter of the station, said supporters of Hon. Koung and Sen. Johnson should be blamed for the incident.

“We were there. Hon. Koung’s supporters bumbed in our studio in demand of airtime when we were already hosting supporters of Yealue. And since we could not entertain them, they started fighting to enter the studio. And that was how the violence started,” Dahn explains when he appeared on a local radio show on Tuesday.

“Att. Yealue’s supporters usually paid for airtime but Hon. Koung’s supporters always said we should bill them. This time around, they wanted to appear on the show paid for by Atty. Yealue but we the journalists refused. As a matter of fact, the microphone, none of the station’s equipment was damaged, so I was surprised to hear the superintendent say the station was off because equipment was damaged.

“We were off air for few days days because our CEO, Alvin Sehkar, advised that we should resume broadcasting after the matter is resolved. And so, we resumed broadcasting yesterday at 4:00 o’clock”.

Following a one-day senatorial debate for candidates in the county organized by the Press Union of Liberia at the Pleebo City Hall, several voters have expressed dismay in the absence of some candidates.

Eric Wleh Giko of the Alternative National Congress, independent candidates John A. Ballout, Emmanuel Wallo Topor, and Roosevelt Yancy were the three candidates who showed up for the townhall debate while James P. Biney of Coalition for Democratic, CDC, incumbent senator H. Dan Morais, and independent Isaac Roland Blalu opted not to attend.

“The absence of the candidates gave us a blank page of what they are taking to the house of Parliament,” said Johsua D. Must, a resident of Middle Cess community in Harper, after the debate.

Joshua, who is the chairman of the Student Unification Alliance at Tubman University, added that their absence leaves voters in limbo because “debate is meant to scrutinize the platforms of those wanting to be lawmakers”.

Added Ophialous Waka of the New Pleebo community: “Let me firstly appreciate the organizers of this debate that is aimed of knowing those contesting [but] how will we know those people who did not attend? It is shameful for them.”

And Patrick Collins of Zone 2 community in Pleebo said it was awful for the three candidates to snub the exercise while Aaron P. Collins of Kelonken frowned on the candidate he is supporting for not showing at the debate.

“I am a bored CDCian, but the act my candidate carried out today [by] escaping this debate does not go down well with everyone,” Collins said, adding that debate means a lot to the party and as such he expected his candidate to fully be represented to tell the people why he wants to be senator. 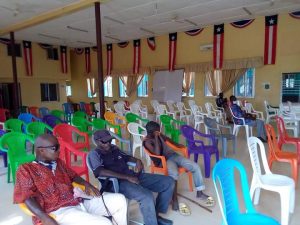 The Bomi County deabte was called off because non of the candidates attended | Photo By: Ibrahim Sesay

The senatorial debate failed to take place on Wednesday December 2, due to the failure of the candidates to turn out.

The debate was intended to bring citizens face-to-face with the candidates, allowing them to answer questions about their visions for the county when elected.

The debate, which was organized by the Center for Media Studies and Peace Building with funding from USAID through Internews, is part of several nationwide debates ongoing ahead of the December 8 poll.

Malcolm Joseph, CEMESP Executive Director, expressed disappointed in the failure of the candidates to show up for the program.

“This was a perfect opportunity for them to make their case and tell the people what they will be doing for them if elected by the people,” he said. “We sent communications to everyone of them and now they’re sending excuses.”

Those who attended the debate blamed the poor show on several issues including candidate’s perception that “debate cannot win anyone election” | Photo By: Jenneh Kemokai

Several persons, who attended the recent senatorial debate in Robertsport, have given various reasons for the poor turnout that saw only two out of 10 candidates attending.

Laurenzo Karteh blamed the situation on the Supreme Court’s decision to put hold on all campaign activities, which he said has given candidates “little time” to campaign. He added that many candidates hold strongly that attending townhall debate “can’t make any candidates to win election” in the county.

For Jenkins Varney Mabande, youth chairman of Robertsport, the poor attendance was due to the limited awareness carried out about the debate, which was organized by the Center for Media Studies and Peace Building with funding from USAID through Internews.

Madnade added that the venue “was not too suitable enough for the program”, saying that even though Robertsport is the county’s capital, the current bad toad condition has constrained organizers of programs to hold these occasions in towns that are along the main highway instead of the county’s capital.

Meanwhile, Madam Susan Obedekah, a local businesswoman who witnessed the debate, has praised the only female candidate for participating in the debate. Female candidate Hawa Corneh Borpleh of the Liberia National Party and Mr. Sando Wayne of the United People Party were the two out of 10 candidates that attended the debate.

Madam Obedekah claimed that most of the candidates did not show up because “they do not want to be held accountable for the promises they will make during the debate”. 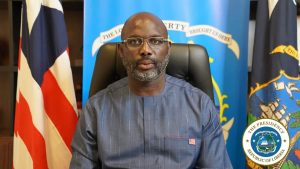 President George Weah on Tuesday called on people of Bong county to vote “yes” for all eight propositions in the constitutional referendum scheduled to take place on December 8.

According to the President, “voting yes” will be in support of good governance and in the best interest of the country.

Said President Weah in Gbarnga: “Changing the election date from the second Tuesday in October to the second Tuesday in November of every election year what makes it bad, to reduce the tenure for the President and Representatives from six to five, Senator from nine to  seven years and further allow our brothers and sisters to come back home, what’s wrong with it? On election day, please come out and vote yes to all because it will help you and our country to move forward”.

The Liberian leader then urged young people of the county not to engage in acts of violence during and after “these critical times”.

He said, young people of the county need to be aware that Liberia is the only country that we have, and as such maintaining and promoting the peace should be paramount to all despite their political differences.

President Weah said young people must take seriously the elections and adequately change their mindset to ensure a peaceful process.

The Rainbow Alliance’s candidate in the race for the Senatorial seat has vowed to place all disabled persons in the country on monthly payroll if he is elected.

Mr. Abrahim M. Dukuly said for years many year, members of the country’s disabled community have suffered “systemic marginalization” and have been left out of the national cake of the country. Mr. Dukuly, who is also living with disability, vowed to achieve his plan through legislative bills.

“People don’t have value for disabled people in this country and that’s why our community has been marginalized year after year,” he said. “If I’m elected, I am going to make sure every disabled person in this country be placed on payroll.”

Asked about how he in intends to achieve this ambition, Mr. Dukuly responded: “I have lobbying skills. I am going to lobby with my colleagues; and trust me, they will endorse my idea and pass it into law.” 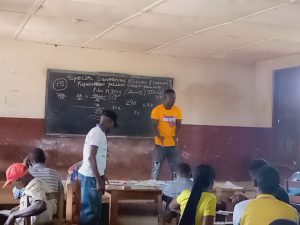 According to NEC, 700 poll workers from across the county were trained during the three days workshop | Photo By: Henry B. Gboluma

With seven days to the Special Senatorial Election and Referendum, the National Elections Commission (NEC) local office in Bopolu City has completed training exercise for 700 poll workers. The training lasted for three days from November 28 – 30 in the three electoral districts.

Seventeen electoral supervisors facilitated the trainings, according to the Senior Elections Magistrate of the county. Ernest McCay said a team of five members will be assigned at each of the 140 polling canters across the county.

On each team will be a presiding officer, ballots paper issuers, cue controllers, inkers and ballots box controllers to help supervise voting on Election Day.

Meanwhile, when a LocalVoicesLiberia reporter visited two of the training sessions in Bopolu City, poll workers expressed were upbeat ahead of the election day, assuring diligence during the electoral process on December 8.

Ahead of the special Senatorial Election, Mr. Ali Smith, the county’s Deputy Election Magistrate, has advised voters to continue observing health procedures. Mr. Smith stressed that voters without nose masks during the special senatorial election, will not be allowed to exercise their voting rights.

Magistrate Smith said “Our action is not aimed at denying electorates their right to vote but to prevent the spread of the coronavirus disease”. He was speaking at a one-day media forum in Buchanan organized by the Media Democracy Initiative.

Smith said poll workers will also make sure that COVID-19 preventive materials are available at all voting places for voters who will not have.

He added that cue controllers will direct every voter to follow Covid-19 preventive measures.

“We are calling on the citizen and inhabitants of Grand Bassa County to continue to abide by the Covid-19 ordinances of the Ministry of Health,” Smith said. The health protocol includes the wearing of nose mask, observing social distancing and hand washing, among others.