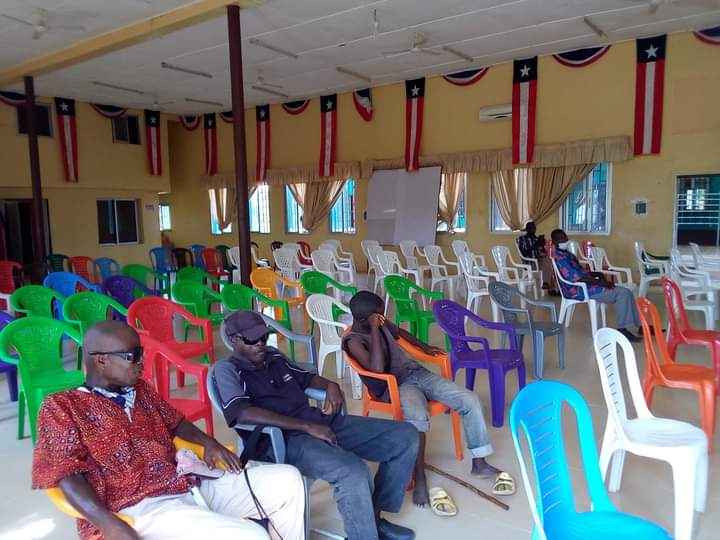 People living with disabilities, and the blind have walked for miles to meet their candidates. The candidates, however, turned their back, perhaps in a sign of what they have to offer if elected in the Senate. Photo Credit: Varflay Kamara

Liberia has not even passed the election day, and candidates for Senate elections have begun abandoning the voters in droves. And in Bomi county, the abandonment is complete. All five candidates in the Bomi county turned their back to the only debate organized here ahead of the December 8 Special Senatorial Elections.

For more than five long hours, the debate organizers, and the voters of Bomi county waited in vain at the Tubmanburg City with not a single candidate showing up.

This is a serious disrespect in the face of the voters, but particularly to the people living with disabilities, including the visually impaired, who made serious efforts to travel and meet their candidates.

The Center for Media Studies and Peacebuilding CEMESP, who organized the debate, said it was “troubled and painfully disappointed” over the decision by the candidates to ditch the debate and hide, despite several contacts to them, and multiple follow-ups informing them of the debate date, location and the time.

CEMESP’s executive Director, Malcolm Joseph, said that all five candidates earlier consented to attend the debate but “regrettably failed the people” in their very first and simple task: answering their questions.

“We regret to announce to the people of Bomi County that we cannot hold any debate in their county today. As you can see, none of the five candidates have shown up for almost five hours since we have been here”, a frustrated Malcolm Joseph told the empty hall.

“This is a total disappointment and an embarrassment,” said Joseph, who refused to make public the reasons given by the candidates for now showing up.

The spokesman for the people with visual impairment and blindness, Varney Sherman said that “Our [candidates] do not care about us. They only are interested in the votes, and not to explain to us, the blind, how they will take care of us when elected to office.”

Bomi county has been at the center of intense political fights and election violence, with former Speaker Alex Tyler and Representative Edwin M. Snowe at the center of stoking rumors of voter fraud and incitement to violence among their supporters.

Both men have denied any allegation of wrongdoing. On November 8, the supporters of the same two candidates were involved in street violence and acts of physical assault, during which many innocent bystanders were injured, and seven are believed to be in critical condition.

“My brother, the people are afraid to even see each other face-to face,” said candidly Peter Solo, a gasoline retailer who sells at the Total Gas Station.

“They hate one another so much that to even come here to sit in one place and have a simple dialogue over their platforms is impossible,” the voter said logically and calmly.

Absent. Voters and organizers went out of their way to prepare for the debate. The candidates preferred to not face the voters. Photo Credit: Varflay Kamara

President George Weah, who campaigned on behalf of Alex Tyler, arrived in Bomi over the weekend to create even more confusion and dismay by throwing jabs at Representative Snowe, one of the frontrunners of the Bomi race.

He accused Snowe of politicizing the distribution of solar light which he -Weah- had sent for the people of Bomi county through Snowe.

“The solar light that was brought in Bomi County by Representative Snowe, was given to him by me, for the people of Bomi and it was not on the basis of politics,” Pres. Weah said.

“You have to watch those people, because they cannot be a better representation for you,” President Weah stressed, according to an article published by Front Page Africa on Tuesday.

Following Weah’s visit to Bomi, supporters of the two main rivals jumped at each other’s throats again, prompting the intervention of the Riot police to stop the fight.

The Center for Media Studies and Peacebuilding with support from USAID through Internews in Liberia has conducted 2020 senatorial candidates debates in Rivercess, Grand Bassa Gbarpolu and Grand Cape Mount counties with candidates in attendance.

In Grand Cape Mount County, only two of the ten candidates showed up while four of eight candidates attended the debate in Gbarpolu county.

CEMESP stated that the political debates are a new phenomenon in Liberia’s democratic development discourse, and the effort must be sustained and repeated until it becomes part of the rule, not the exception: “We hope that as time goes by, people will begin to know the importance of debates in every political contestation.”

Lofa County: Eight out of 11 Senate Candidates Refused to Face the Voters’ Questions
Grand Gedeh County: Vote More Women, It Will Be Good For the Country