Grand Gedeh County: Vote More Women, It Will Be Good For the Country 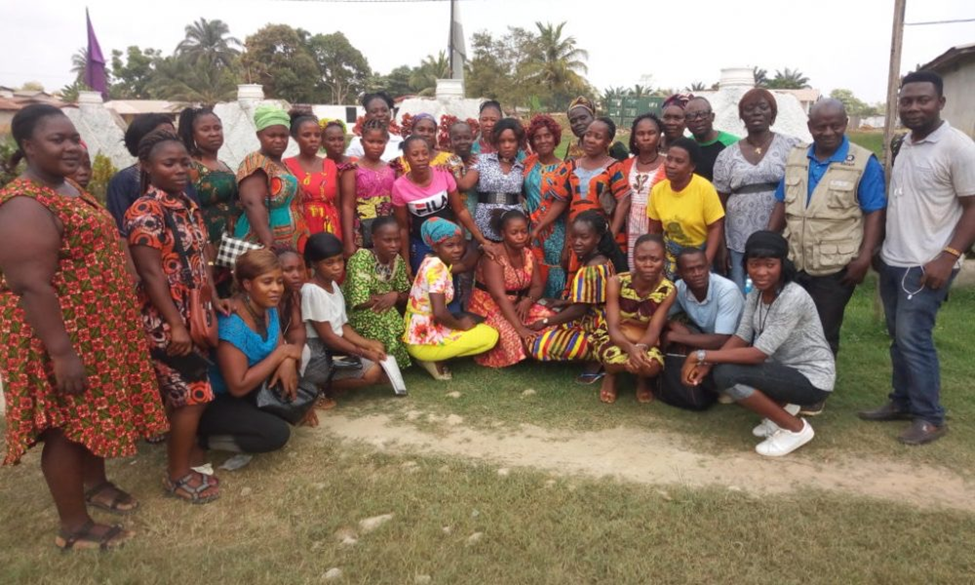 Women in Grand Gedeh are determined to bring at least one female candidate to the Senate. Photo Credit: Local Voices Liberia

Women in Grand Gedeh have made a passionate appeal to the electorate to consider voting more women in the upcoming senatorial election. A campaign has already been set in motion under the banner “It is our time to support women candidates.”

Lead campaigner, Cecelia Bossoe, has called on women voters to show solidarity in voting female candidates. She has been promoting female candidates in the hope that there will be more women in the government structures, and particularly in the Legislative, where all the laws for the country are being drafted, debated, and voted on.

“Women have good qualities to lead. When elected in the Legislative, they can project the cause of other women,” she explained. This means that when women, who truly understand the issues and challenges of everyday women, are in the Legislative, they will be able to make laws to address these challenges, to speak to the women and to advance their cause in the society.

Women make up 49% of the total registered voters according to the National Elections Commission 2017 data.

Bossoe has nothing against male legislators, but she believes they have betrayed the confidence of the people, in general, and that of the women and children, and vulnerable populations. Because when a country suffers, the women and children and people with disabilities are the ones that are affected more than anyone else.

Speaking to in an interview with Internews fellow, Cecelia Bossoe regretted that women are discouraged from running as candidates because of the very legitimate financial concerns, and lack of serious money to back their political campaigns. When faced with male candidates, especially incumbents who come backed by heavy financial support, and salaries and benefits, women stand no chance to make any advance in convincing voters to vote for them.

However, Bossoe said that if women voters were inclined to vote more women in the Legislative, they will see that women can become game changers to address the challenges of the vulnerable people, because women are more caring.

Ruth Moore, a market woman at the Zwedru Central Market said that she and her fellow mothers have made up their mind to try to bring more women in the Legislative.

Ruth had done more than just talk. She said that the association of the market women had fundraised and donated money to support women candidates.

Grand Gedeh Rural Women President, Jesadeh Barzon, said that “We must get it, it’s our time to better discuss our own issues.” Barzon took to the streets in towns and villages of Grand Gedeh sharing the message of voting more women in elected positions.

Female senatorial candidate, Felecia Duncan of the Collaborating Political Parties (CPP) stressed the need for affirmative action in women political empowerment. She called out to all women of voting age to heed the clarion call and cast their ballot for women candidates. Duncan comes from the NGO background and she has assured voters that her track record must be considered to convince voters of her capacity to deliver the good.

Grand Gedeh County has nine senatorial candidates, including females Felecia Duncan of the CPP and Beatrice Sarpee Johnson, an Independent.

Section 4.5 of Liberia’s New Election Law calls for no less than 30% representation of each gender on the lists of candidates submitted by political parties. Since the man have always held the majority on the candidates’ lists, this provision was designed to support the inclusion of women on the party lists. However, the provision is non-binding, and there is no repercussion for parties who chose to disrespect it.

According to Associate Dean and Assistant Professor Jamal C. Dehtho, Jr., “The 30% quota for political parties is not a mandatory requirement. That is, if a political party does not have the 30% female candidates, there is no prescribed punishment, because the law is written in a way that the political parties must make good faith efforts to have gender balance. But I do not see where NEC can punish the political parties if they do not reach that quota.” The statement was made on December 4, during a WhatsApp live chat organized by Local Voices Media Network, Executive Director, Alpha Daffae Senkpeni, during which Professor Dehtho addressed questions from journalists about the legal implication of the referendum.