Around The Country: Updates From the County — November 9, 2020

We will keep updating this page throughout the day. Keep Following us.

Many voters were seen rejecting the referendum papers on Tuesday in Maryland County | Photo By: Bryan Dioh

Some voters argued that many people did not adequately vote the propositions because they did not understand the process. Many also rejected the referendum ballots on Tuesday at several poling places.

Cecelia Winser, a voter in Harper, said she refused to accept the Referendum ballot papers from NEC polling staff on Tuesday.

“Because to me, it was unless; so, why should I hold it. We should be serious in this country,” she said, while calling for the entire process to be nullified. “How will we be having activities like this and we are not informed properly. That’s wrong totally.

“Look, we should be serious in this country if Liberia should get on its right path and before that is done we should first change our minds and attitudes, that which is cardinal to our country’s growth and development.

Several persons in Maryland County had complained about the poor civic voter education concerning the referendum with some calling for its postponement before December 8. 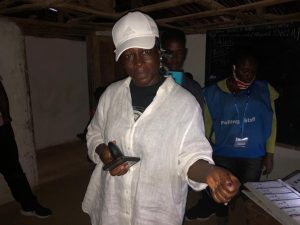 Mr. Findley (Top) is running for the senate for the first time after losing in 2014 while Karnga-Lawrence (below) is the incumbent | Reporting By: Elton Tiah ; Photo By: Sampson David

Ahead of the official result from the National Election Commission, two top senatorial candidates of Grand Bassa County, Senator Nyonblee Karnga-Lawrence and former Mr. Gbehzohngar Milton Findley have promised to accept the outcome of the special Senatorial election.

The two candidates spoke separately after casting their ballots at different polling places on Tuesday.

Said Madam Kangar-Lawrence: “As a citizen who wants to ensure that Liberia is peaceful, I’m willing to accept any result from the election”.

She voted in Nyehweh Town along the Monrovia- Buchanan highway while Findley voted at the administration building on Robert Street. Both Lawrence and Findley expressed joy over the peaceful nature of the election.

Gbehzohngar Findley, who is recent former Foreign Minister, said: “I am contesting because the people called me, and I am willing to respect whatever decisions they will take”.

The counting of senatorial ballots started at 12:00 pm on Wednesday | Photo By: Henry B. Gboluma, Jr.

The Senior Elections Magistrate of the county says counting of the Senatoral ballots will be done first before the referendum papers.

The counting started at 12:00 pm on Wednesday in the presence of political parties, independent candidate and CSOs representatives.

Atty. Fomba A.M. Swaray also said out of the 144 polling places in the county, only one place had a problem.

“Only Nomodatonau town is our concerned now,” he said. “But that issue is been addressed at the headquarters.”

He, however, assured the county that the people in that Nomodatonau town will still vote as soon the situation is addressed.

It can be recalled that early on Tuesday, a presiding officer of the four polling stations in Nomodatonau town, Thomas Bowier alleged that the paramount Chief Magill Wuluah of Kongba District ordered the seizure of the four ballot boxes.

He said residents in the town complained that some Sierra Leoneans crossed over to vote in their area even though they have valid voting cards. As a result of the incident, polling did not take place there. 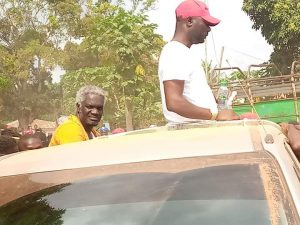 Ahead of final vote count by NEC in the County, the senatorial candidate of the ruling CDC has begun celebrating in the county.

Supporters of Hon. Zoe Emmanuel Pennue were seeing in major streets and communities of Zwedru early Wednesday morning celebrating as counting continues across the county. Provisional results from within his Tchine electoral district #1 and other districts have put him ahead.

According to the NEC Magisterial office in the county, over 46,000 registered for the election, which was manifested on Tuesday as turnout looked very impressive.