Around The Country: Election Updates From Four Counties – December 14, 2020

We will keep updating this page throughout the day. Keep Following us. 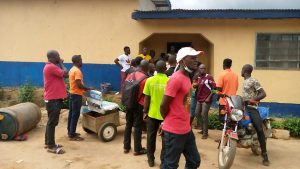 Two vehicles belonging to the NEC and the Police were damaged while one journalist was brutalized by protesters on Sunday, December 13 | Photo By: Regina Juwle

A large crowd of people including men, women, and some supporters of senatorial candidates were seen at the National Elections Commission local office in Barclayville protesting on Sunday.

The protest sparked after rumor intensified that the senatorial candidate of the Coalition for Democratic Change was pronounced winner of the December 8 poll.

The angry crowd destroyed vehicles belonging to the National Elections Commission and the Liberia National Police who went on the scene to calm the situation. The crowd also threatened to burn down the NEC office.

Christopher Kumeh, a reporter who was brutalized by the angry crowd while reporting, said the protesters comprised of supporters of two senatorial candidates.

“They were supporters of Numene T. H. Bartewa (independent candidate) and Zoe Nathaniel Bahway and I was beaten by them because I was going live on Grand Kru TV,” Kumeh said.

The situation led NEC Magistrate Solomon Janneh and other NEC staff in the tally to escape through the bushes. 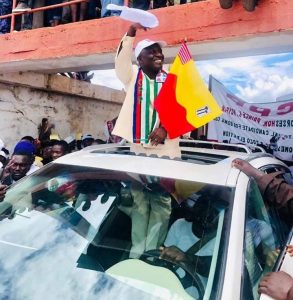 Hon. Moye waves to a crowd of supporters after decalred winner by NEC with 51.28% of the votes. He replaces outcoming senator Henry Yallah | Photo By: Emmanuel Mafelah

Bong County’s Senator-elect, Prince K. Moye has challenged people of the county to put aside their political differences and work together in moving the county forward for the common good of the ordinary people.

Moye said he will work with his colleagues in the Legislature and friends abroad to bring meaningful developments to the county.

Uniting the Bong County Legislative caucus, the completion of the Bong County Technical College, increment in the budget of Phebe, C.B. Dumbar, Bong Mine hospitals, CARI and reconciliation are the newly elected senator major priorities.

He said, “Fellow Bongese, we were officially announced by the Board of Commissioners of the National Elections Commission (NEC) as the winner of the midterm senatorial election in Bong County. We feel exceedingly elated, grateful, and humbled by the overwhelming support we received across the county and subsequently becoming the winner in the end.

“The election is over; Bong County has won. Let us put aside our political differences and work collectively for the common good of Bong. I can assure you all that we will not fail you”.

Hon. Moye won the election with 51.28% replacing outcoming senator Henry Yallah of the ruling CDC, who won 32.91% of the total votes cast. 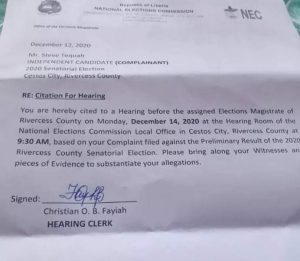 The Campaign team of Steve Tequah, an independent candidate in the county Senatorial election, has filed a former complaint to NEC, citing “irregularities in the process.”

Speaking on the ‘Talking Points’ on Echo Radio in River Cess County on Monday, the spokesperson of the team Timothy Bartee alleged that during the second day of the tallying his representatives at the tally center were chased from the center by Wellington Geevon Smith’s supporters.

Bartee noted that his poll watchers alleged that they were denied their rights to vote at the various centers of assignments during the election.

Bartee said he is convinced that candidate Tequah won the election and not Smith as announced by the NEC. 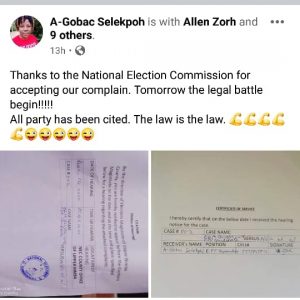 The National Elections Commission’s Upper Nimba Magisterial office in Sanniquellie will today begin hearing into a complaint filed by a representative of the Collaborating Political Parties’ candidate in the upper Nimba County’s tally room.

The hearing is expected to begin at 10:00am today, according to the citation served the parties involved.

Madam Edith Gongloe-Weh is the candidate of the CPP in the Special Senatorial Election for Nimba County.

A-Gobac Selekpoh, a representative of the CPP, on Monday told Radio Nimba that the tallying of results from polling places in Upper Nimba was marred by fraud.

“Therefore, I have my complaint on concerns of suspicion of ‘ballot stuffing’ in some polling places in Nimba County Electoral Districts 4 & 5,” said the CPP observer. “Reports sent in by our poll observers in those areas experienced low turnouts on election day”.

He continued: “We were shocked when we saw the kind of results that came from those districts”.

Meanwhile, the NEC latest provisional results released Sunday, December 13, placed the Senatorial candidate of the Movement for Democracy and Reconstruction, Jeremiah Kpan Koung in the lead with 36,954 while the CPP candidate, Madame Gongloe-Weh has 32,802 votes with just 19 out of 741 polling places remaining.