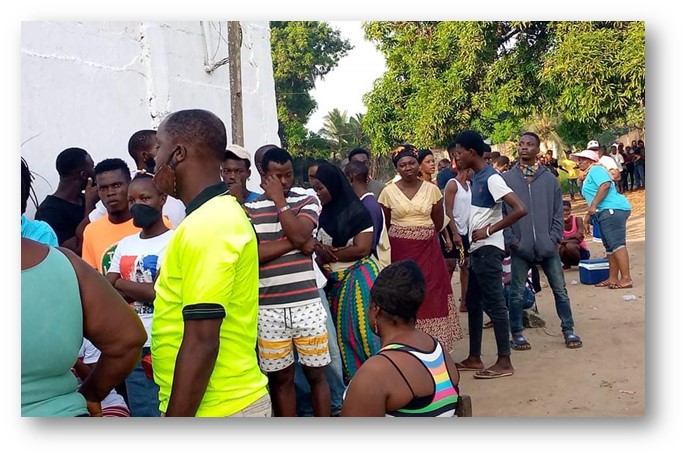 Voters waiting to cast their ballot on December 8. The vast majority of people did not wear facial mask to protect against the spread of the COVID-19 disease, there was no social distancing and almost no hand washing / Wea

The COVID-19 Task Force Response Coordinator, Mary Broh, warned that the December 8 elections could turn into a Covid-19 superspreading event. This means that over the next few days and weeks Liberia could see a significant increase in the number of new infections with the SARS-CoV-2 virus, that causes the COVID-19 disease.

Broh observed that there was limited, or complete lack of implementation of the COVID-19 health protocols during the voting process.

“By the end of this election, two to three days from now, a lot of people will be infected because of lack of adherence to the health protocols. That means that they did not wash their hands, they were not socially distancing, and they were not wearing their mask.”

Broh noted with dismay that people hugged each other and shook hands, which she called “unfortunate.”

Election campaign could have also been a superspreading event

Health protocols were largely disregarded during the elections campaign also, when senatorial candidates gathered hundreds of people at rallies without social distancing, hand washing or mask wearing. On December 5 Liberia recorded 65 new cases of COVID-19, which was the second highest daily record. The highest daily record was reported on June 29, with 84 confirmed cases, according to the World Health Organization (WHO). Mary Broh, COVID-19 Task Force Response Coordinator, fears that the elections served as a superspreading event and predicts an increase in the number of COVID-19 cases in the coming days. Photo Credit: Joyclyn Wea

Most of the voters, she said, were without a facial mask.

“Liberians do not believe in COVID-19 and they do not think COVID-19 exists. I can tell you one thing, if you do not adhere [to health protocols] you pay the prize. I will do the best I can to talk to people, ensuring that they adhere to health protocols, and if they think that nothing can touch them, that is up to them. But at the end of the day, there might be a supper spreader.”

Broh alleged that the National Elections Commission (NEC) may have provided conflicting information to people days before voting day, when it stated that with, or without the mask, people would be allowed to vote.

Broh said that her Task Force and the NEC held meetings since April to establish health protocols for election day. However, late on December 7, hours before the elections, the NEC issued a statement saying that every registered voter will be allowed to vote, with or without mask. The NEC reportedly acted quick to counter rumors claiming that voters without a facial mask would be turned away from voting.

The NEC had affirmed weeks before the elections, that it will encourage implementation of health protocols at voting centers, including facial masks, social distancing, and hand washing.

Liberia’s Chief Medical Officer, Dr. Francis Kateh had previously stated to the Liberian media that the democratic process of voting cannot be stalled because of the virus but cautioned citizens and political actors to adhere to the health regulations to stay safe.

Dr. Kateh had also assured that health authorities were partnering with the NEC to ensure compliance with health protocols on the election day. However, there was no social distancing at polling stations and almost no facial mask wearing.

Liberian walked away from voting due to fear of infection

The disregard of health protocols served as deterrent for some voters, who preferred to give up on their constitutional voting right in order to protect their health. One such case was Comfort Mulbah, a nurse at Dr. Swaray Surgical and Medical Clinic in Soul Clinic Paynesville.

“I was shocked to see how people were ribbing on each other without even considering the fact that we are still fighting a pandemic,” said Comfort Mulbah.

“The majority of the people at the center I went to vote were without a mask, they were so close to each other and there were no washing hands station. Sadly, no one was there to tell [the voters] what to do.”

Patrick Turley, a resident on Old Road said that if it is true that there was coronavirus in Liberia, authorities should not have organized elections and jeopardized people’s health. He blamed the government and line ministries and agencies which are not taking the matter seriously and, as a result, citizens do not believe in the existence of the virus.

“For me, I do believe that there is Coronavirus, but it is not in Liberia because of the way authorities have proceeded December 8. You cannot claim that there is a virus in the country and yet you put your citizens in the harm’s way,” Turley said, and accused a lack of coordination between Government Ministries and Agencies which have failed to work together to protect the people.

The NEC should take full responsibility, he said, if there is a further spread of the virus, because of its action to allow people to go to the poll without any adherence to the health regulations.

This article was produced with support from Internews Liberia through the Liberia Media Development Program.