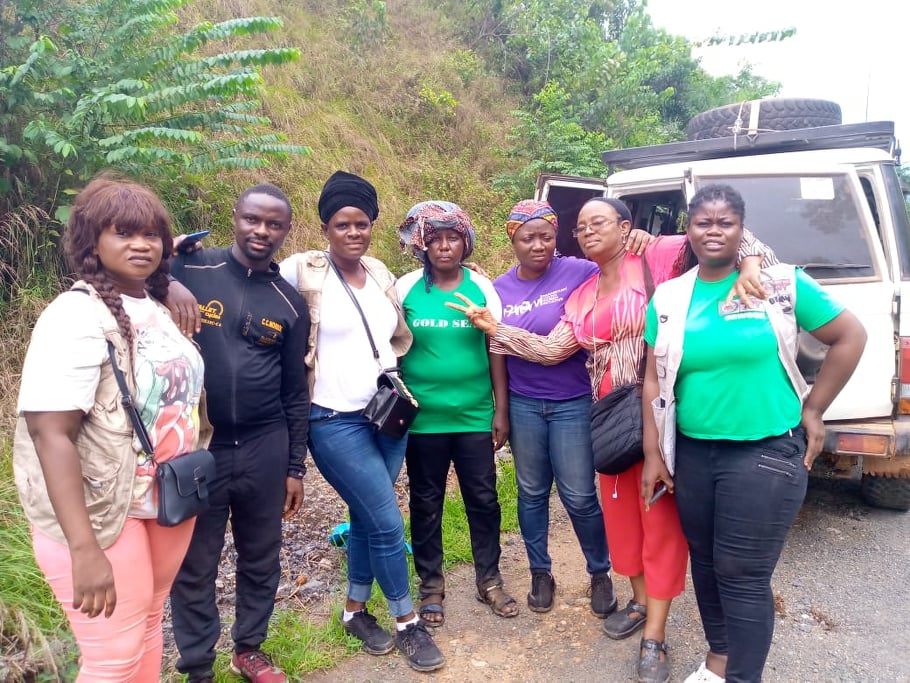 The team of women’s rights advocacy organizations intervened after receiving reports that Madam Kanneh was beaten, detained and threatened with the “Country Devil’’ in the town of Nomodatonau, District 3, near the Sierra Leone border.  The group rescued Madam Kanneh and took her to a safe location.

Madam Kanneh, one of nine contestants in Gbarpolu’s senatorial race, is leading by 449 votes (4722/25.68 percent); followed by Rep. Alfred Gayflor Koiwood of the ruling party, the Coalition of Democratic Change (4,273/23.24 percent). The National Election Commission (NEC) ordered a rerun in Nomodatonau because the town’s 2021 voters did not participate in the Dec. 8, 2020 election because Paramount Chief Magill Wuluah seized the ballot boxes and election materials.

The rerun was scheduled to take place on Dec. 15, 2020. The day before the election, the Chief Wuluah brought in the traditional male devil, a tactic intended to prevent Madam Kanneh and her supporters from entering the town to participate in the electoral process. In traditional societies, women are not supposed to see the male devil.  In our investigation, we reviewed several video tapes where Gbarpolu County’s Superintendent J. Keyah Saah was seen threatening local officials that they would lose their jobs, if they do not vote for Koiwood, the CDC candidate.

During the visit, the team learned that Madam Kanneh was beaten and harassed along with several members of her campaign team. Two of the women on the campaign team were raped while in police custody. The women experienced “horrific forms of human rights abuses.’’ They were ordered to stand in the sun with their arms raised for hours without food. Madam Kanneh’s brother, Cllr. Boakai Kanneh, head of the Law Reform Committee, was also beaten while in police custody.

We wish to inform the public that the “Traditional male devil’’ and other cultural practices have no role in politics because they limit women’s participation. Hence, we strongly condemn violence against women in the ongoing elections, specifically Gbarpolu County.

We are particularly concerned that government officials are creating barriers to prevent  a leading female candidate vying for a seat in the male-dominated Senate. The 30-member Senate has one female—Senator Nyonblee Karnga-Lawrence, who won re-election in the Special Senatorial Election. Edith Gongloe -Weh, of the Collaborating Political Parties (CPP) and Kanneh, an independent candidate, are the only two women left in the Senatorial race.

We wish to remind the government that Liberia is a signatory to many human rights treaties including the Convention on the Elimination of All Forms of Discrimination Against Women (CEDAW), United National Security Resolution (UNSCR) 1325, UNSCR 1820 and other human rights protocols that not only recognize women’s right to fully participate in political and public life, but also bans using rape as a weapon of conflict.  Electoral violence is a crime against humanity.

In addition, Section 10.21 of the new election law encourages candidates and political parties to travel throughout the country to canvass for elections; subsequent provisions prohibit administrative, military/and or paramilitary from interfering with a person’s rights to participate in politics.  The new election law gives the NEC the authority to recommend to the government the dismissal of any official involved in interfering in the electoral process.

Based on our findings, we strongly urge President George Manneh Weah to investigate these reports and take the following actions:

We would like to thank the women of Gbarpolu who worked tirelessly to bring the assault on Madam Kanneh and her supporters to the public.

We wish to remind the government that what happened to Madam Boto and her supporters is not an isolated incident. Rape and violence against women are on the increase, and in the last two years, there has been a rise in assaults against women during the electoral process.

Rape should not be used as a weapon in elections. It is a violation of women’s rights, and Liberia as a signatory to the various human rights laws, must comply.

We will continue our efforts to hold government accountable for the treaties and commitments it has signed to protect the rights of women and all individuals participating in electoral processes.

About the Participating Organizations:

PAYOWI: The Paramount Young Women Initiative, which was established in 2005, works to increase opportunities for women and girls through advocacy, education, and empowerment programs.

Women Can Lead: The Liberian Women Can Lead is a national campaign initiated by Sister Aid Liberia to profile and amplify the leadership roles, competence, & capabilities of women, especially women politicians with a goal of promoting transformative leadership.

ORWOCH – The organization champions women’s rights in governance and access to justice.